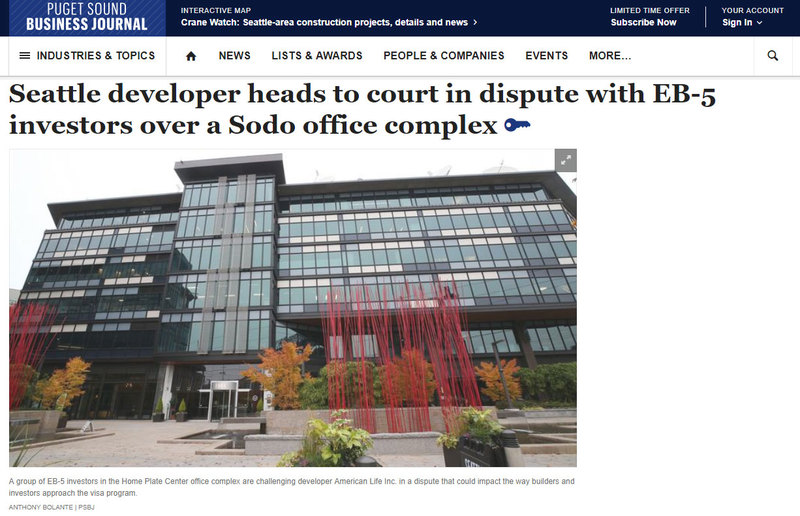 The limited partnerships formed by Seattle developer American Life Inc. for Home Plate Center are asking a judge to determine the value of the Sodo office complex after a dispute with some of its investors.

American Life — one of the region's top EB-5 developers — formed a new limited partnership for the property. They offered investors an opportunity to cash out on their investment in Home Plate Center or take a stake in the new partnership.

A group of investors, many of whom used the project to apply for an EB-5 visa, believed their investment was worth more than American Life offered in the merger. In a rare move, the group of EB-5 investors challenged the developer's offer, arguing their investment should be worth more in Seattle's booming real estate market.

Building permits suggest Facebook Inc. is planning to move into the office complex. Neither Facebook nor American Life have confirmed the plans.

Now a court will decide what their investment is worth. One EB-5 expert said the outcome of the case could change the way builders raise money through the visa program and what investors expect in return.

The EB-5 program allows foreign entrepreneurs to apply for a green card if they invest in a U.S. commercial enterprise that creates or preserves 10 full-time, permanent jobs for U.S. workers. The minimum investment is $500,000 or $1 million, depending on the area.

The petition, filed in King County Superior Court on Dec. 13, asks a court to determine a fair value for the property and reveals nine additional dissident investors.

In addition to requesting the court determine a fair value for each stake, the American Life affiliates asked the court to sanction Litowitz — the Chicago attorney representing some of the dissident investors — and award costs and legal fees.

American Life affiliates said in the petition that "the Litowitz Group has engaged in a pattern of conduct intended to frustrate, obstruct, and disrupt the orderly process of the dissenters proceeding, as well as to harass, threaten, and pressure 1501 First and its representatives and employees."

Litowitz denied the allegations in a statement to the Business Journal.

A representative of American Life Inc. and Matthew Carvalho, a Yarmuth Wilsdon attorney who filed the petition on behalf of its affiliates, did not respond to requests for more information.