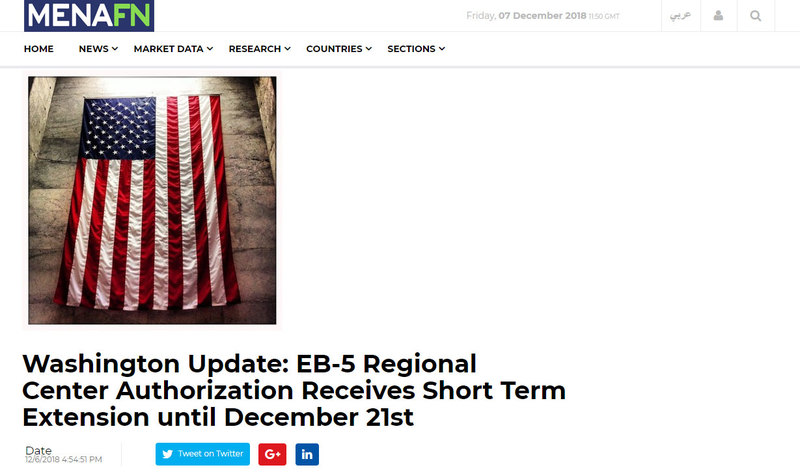 Presently, the EB-5 Regional Center program was supposed to expire this Friday, December 7th at midnight. Due to the death of former president George H.W. Bush and the State Funeral in his honor, lawmakers have decided to delay this deadline to December 21st.

The Future of EB-5 The House of Representatives and the U.S. Senate will have to vote on the seven appropriations bills, which includes extending the EB-5 program into 2019, as one omnibus.

Over the past several years, EB-5 has experienced short extension periods, keeping the program's position in continual limbo. If the program goes through legislative changes for a more permanent resolution, the modifications to the program could be drastic. "The two-week extension offered by Congress will provide a critical opportunity for investors to move forward and file their I-526 petition with USCIS, before USCIS finalizes new regulations or Congress considers legislation to reform the EB-5 program, both of which would increase the minimum EB-5 investment threshold," said Ignacio Donoso, a partner at Donoso Law, a nationally recognized law firm specializing in immigration.

Currently the program allows foreign investors to invest a minimum of $500,000 in a an EB-5 project in the United States. Stephen Yale-Loehr, an attorney at Ithaca, N.Y.-based Miller Mayer LLP, and an immigration law professor at Cornell Law School, "predicts that congress will extend EB-5 again without any changes…maybe in the spring everybody can agree on a reform package that Congress can enact".

U.S. Immigration Fund will continue to monitor this story closely and provide additional updates as they arise.

About U.S. Immigration Fund (USIF) is America's leading EB-5 Regional Center operator with world-renowned investment opportunities from New York City to California and 6,000 clients from across the globe. With approved Regional Centers located in the world's most thriving cities, USIF provides worthwhile opportunities for foreign investors and their families to obtain permanent U.S. residency through the EB-5 Program. These initiatives enjoy full government support as they stimulate the economy, generate at least ten jobs per investment, and promote community development while providing access to green cards for foreign investors and their families.