SEC Charges Advisor With Scamming Elderly Out of Millions: Enforcement 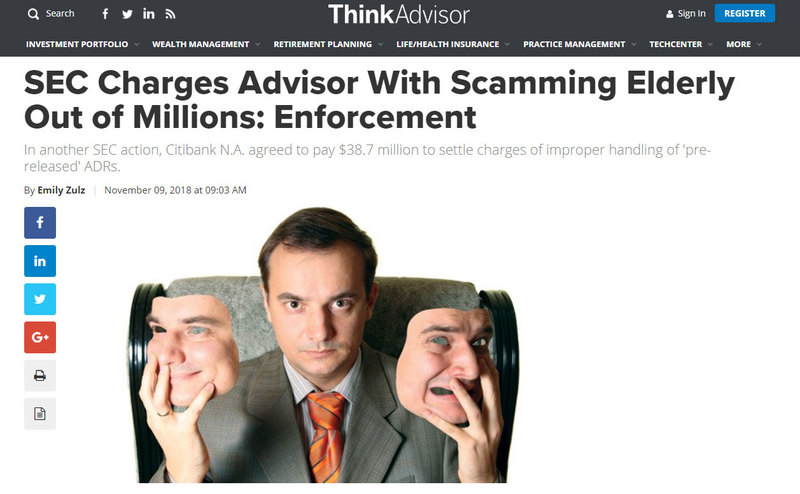 The Securities and Exchange Commission charged a former registered representative and investment advisor with operating a long-running offering fraud.

The SEC’s complaint alleges that Douglas Simanski raised more than $3.9 million from approximately 27 of his brokerage customers and investment advisory clients by telling them that he would invest their money in either a “tax-free” fixed rate investment, a rental car company, or one of two coal mining companies in which Simanski claimed to have an ownership interest.

“Simanski convinced some of his most trusting and vulnerable clients, many of them retired or elderly, to invest their money while knowing the investments were not legitimate, that he would make virtually no securities investments on their behalf, and would instead use their money for personal expenses or to repay other investors,” the complaint states.

To conceal his fraudulent activities, Simanski placed investor funds in brokerage and bank accounts that Simanski opened in his wife’s name, according to the SEC.

The complaint alleges that instead of investing the money as he promised, Simanski largely used the money to repay other investors and for his personal use.

According to the complaint, Simanski’s scheme collapsed in May 2016 when one of his clients contacted the Financial Industry Regulatory Authority (FINRA) and Simanski admitted his scheme to his employer. Shortly thereafter, according to BrokerCheck, Simanski was discharged from his employer at the time, Next Financial Group. FINRA then barred Simanski from acting as a broker or otherwise associating with a broker-dealer firm in June of 2016.

“This matter highlights the need for retail investors – and retirees and elderly individuals in particular – to remain skeptical of investments that sound too good to be true and confirm that investments recommended by brokers and investment advisers are approved for sale by their respective brokerage or advisory firms before transferring funds,” said Kelly Gibson, associate regional director for enforcement in the SEC’s Philadelphia Regional Office.

The SEC’s complaint charges Simanski with violating antifraud provisions of the federal securities laws.  Simanski has agreed to settle the SEC charges against him. The settlement, which is subject to court approval, orders injunctive relief and disgorgement of ill-gotten gains plus interest.

Simanski also agreed to the entry of an SEC order that, when entered, will bar him from the securities industry for the rest of his life.

In a parallel action, the U.S. Attorney’s Office for the Western District of Pennsylvania announced that Simanski pleaded guilty to criminal charges.

ADRs – U.S. securities that represent foreign shares of a foreign company – require a corresponding number of foreign shares to be held in custody at a depositary bank.

According to the SEC’s order, Citibank improperly provided ADRs to brokers in thousands of pre-release transactions when neither the broker nor its customers had the foreign shares needed to support those new ADRs.

Such practices resulted in inflating the total number of a foreign issuer’s tradeable securities, which resulted in abusive practices like inappropriate short selling and dividend arbitrage that should not have been occurring, according to the SEC.

Without admitting or denying the SEC’s findings, Citibank agreed to pay more than $20.9 million in disgorgement of ill-gotten gains plus $4.2 million in prejudgment interest and a $13.5 million penalty for a total of more than $38.7 million.

SEC Charges Family Friend of Former Banker With Insider Trading
The SEC charged an IT professional in Texas who allegedly participated in an insider trading scheme perpetrated by a former Wall Street investment banking analyst.

The SEC’s complaint alleges that Hamed Ettu, a family friend of the analyst Damilare Sonoiki, received illegal tips about nonpublic impending mergers as the two communicated in text messages using a Nigerian dialect to carry out their illicit trading.

The SEC previously charged Sonoiki and a professional football player, Mychal Kendricks, in the scheme.

Using allegedly misappropriated information, Ettu and Sonoiki made approximately $93,000 in illegal profits by using Ettu’s brokerage account to purchase the call options of companies that were about to be acquired and then selling these positions after the deals were announced.  In one instance, they generated returns of more than 318% in less than one month.

The SEC’s complaint charges Ettu with fraud and is seeking the return of his ill-gotten trading profits plus interest and penalties.

The SEC charged a businessman and a California-based attorney with defrauding investors seeking to participate in the EB-5 immigrant investor program, stealing their money to fund personal expenses.

The SEC’s complaint alleges that Robert Ferrante and attorney Marilyn Thomassen participated in a fraudulent scheme with PDC Capital Group and its principal, Emilio Francisco, to defraud at least 135 investors out of $9.5 million using 19 different EB-5 offerings made primarily to investors in China.

In 2016, the SEC charged Francisco and PDC Capital with defrauding investors seeking to participate in the EB-5 immigrant investor program.

According to the complaint, Ferrante was Francisco’s partner in the operation of PDC Capital, and the two diverted $19.2 million of investor funds to PDC Capital, and outright stole at least $9.5 million.

Thomassen served as the escrow agent for all 19 offerings and contrary to representations to investors, allowed Francisco and Ferrante to divert at least $19.2 million of investors’ funds deposited into escrow accounts to accounts controlled by PDC Capital. Prior to engaging in the fraud, Thomassen was Francisco’s law partner. More than $900,000 of the stolen investor money was used to pay Ferrante’s personal expenses.

The SEC’s complaint seeks disgorgement of ill-gotten gains, interest, penalties and permanent injunctions from Ferrante. Thomassen has agreed, without admitting or denying the SEC’s allegations, to the entry of permanent injunctions against further violations of the charged provisions of the federal securities laws, a court order prohibiting her from participating in EB-5 offerings and from issuing or selling any security, and to pay a monetary penalty of $187,767.