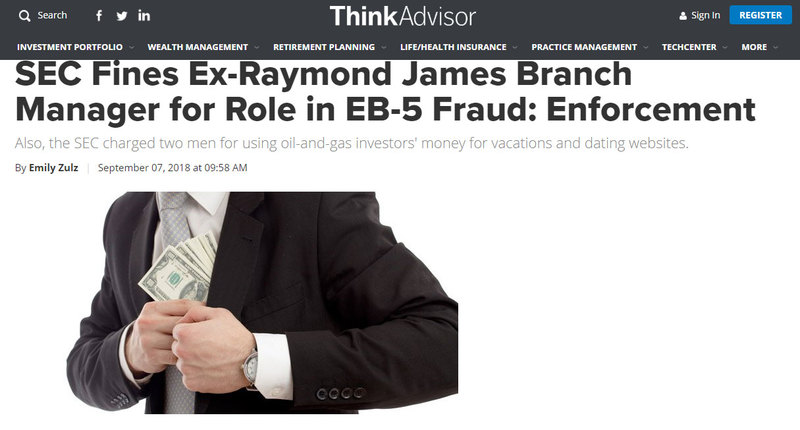 The Securities and Exchange Commission filed charges against a former registered representative and branch manager with Raymond James & Associates for helping facilitate an EB-5 offering fraud perpetrated by a Vermont-based ski resort.

The SEC’s complaint alleges that Joel Burstein, who according to BrokerCheck was at Raymond James from 2001 to 2016, aided and abetted the ski resort’s owner, Ariel Quiros, in misappropriation and misuse of investor money that flowed through various brokerage accounts held at Raymond James.

Burstein, who is Quiros’ former son-in-law, managed those accounts. According to the SEC’s complaint, Burstein facilitated Quiros’ misappropriation of more than $21 million of investor funds to acquire the Jay Peak ski resort.

Burstein then assisted Quiros in trying to mask the significant shortfall created in the Raymond James brokerage accounts from the misappropriation. The complaint also alleges that Burstein facilitated Quiros’ fraudulent use of more than $18 million of investor money to pay off Jay Peak’s margin debt at Raymond James.

In April of 2016, the SEC filed an emergency civil action against Quiros, Jay Peak and others for engaging in an offering fraud in which, among other things, Quiros systematically misappropriated and misused investor funds.

The EB-5 program solicits investments from foreigners in exchange for U.S. residency.

In April of last year, Raymond James agreed to pay $150 million and settle all claims tied to the scheme.

Without admitting or denying the SEC’s allegations, Burstein consented to the entry of a final judgment ordering him to pay a civil penalty of $80,000.

Burstein also settled, without admitting or denying the findings, to an SEC order that bars him from association with any broker, dealer, investment advisor, municipal securities dealer, transfer agen, or nationally recognized statistical rating organization, and from participating in an offering of penny stock, with the right to apply for reentry after 10 years.

Although they told prospective investors that the investment proceeds would be used to drill for oil in Kentucky, the main goal of the offering was to enrich Phelps and Harper.

They used a small amount to drill two wells. Neither well was commercially viable. Despite knowing this, the complaint alleges that Phelps and Harper continued soliciting additional funds from investors, purportedly to drill for oil in both wells.

The SEC awarded $39 million to one whistleblower and $15 million to another whose critical information and continued assistance helped the agency bring an important enforcement action.

The $39 million award is the second largest in the history of the SEC’s whistleblower program.

By law, the SEC protects the confidentiality of whistleblowers and does not disclose information that might directly or indirectly reveal a whistleblower’s identity.

The SEC has awarded more than $320 million to 57 individuals since issuing its first award in 2012. All payments are made out of an investor protection fund established by Congress that is financed through monetary sanctions paid to the SEC by securities law violators.

Whistleblower awards can range from 10% to 30% of the money collected when the monetary sanctions exceed $1 million.

The SEC settled Foreign Corrupt Practices Act charges against a New Jersey real estate broker arising out of his attempt to bribe a foreign official while acting as a broker for Colliers International Group Inc.

According to the SEC’s order, Joohyun Bahn attempted to bribe a foreign official of a country in the Middle East as part of an effort to broker the sale of Landmark 72, a high-rise commercial building in Vietnam, on behalf of Colliers.

The SEC’s order found that Bahn gave the bribe to an accomplice, expecting him to pass it along to the official. But the accomplice, who had misrepresented the official’s involvement in the scheme, kept the money for himself, and the official was unaware of the attempted bribe.

Bahn was also found to have falsely represented that a buyer had committed to acquire the building, thereby causing Colliers to improperly record commission revenue that it would never receive.

The SEC’s order found that Bahn violated the FCPA’s antibribery provisions, caused violations of the Act’s books and records provisions, intentionally circumvented Colliers’ internal accounting controls, and falsified its corporate books and records. Bahn has agreed to pay $225,000 in disgorgement.

The SEC charged two Michigan men with fraud for their roles in a fake accounts scheme perpetrated by a phony day-trading firm, Nonko Trading.

The SEC alleges that Jeffrey Goldman and Christopher Eikenberry participated in and profited from a scheme to defraud Nonko’s customers out of at least $1.4 million.

While Nonko marketed itself as a state-of-the-art platform for day-trading professionals, the SEC alleges that it secretly provided customers with training accounts that merely simulated actual trading. Nonko team members allegedly pocketed customers’ deposits and used the money for personal expenses and for Ponzi-like payments to customers who wanted to close their accounts.

According to the complaint, Nonko deliberately targeted traders who were inexperienced or had a history of trading losses and lured them by promising generous leverage, low trading commissions, and low minimum deposit requirements.

“As alleged in our complaint, Goldman and Eikenberry actively concealed their involvement in the alleged fraud and took steps to evade U.S. broker-dealer registration requirements,” said Joseph G. Sansone, chief of the SEC Enforcement Division’s Market Abuse Unit, in a statement. “But, behind the scenes, they were active and knowing participants in the scheme, which caused losses to more than 260 investors.”

The SEC’s complaint charges Goldman and Eikenberry with fraud and with aiding and abetting Nonko’s fraud and broker-dealer registration violations. The SEC is seeking injunctions and the disgorgement of their allegedly ill-gotten gains, plus interest and penalties.

In a parallel action, the U.S. Attorney’s Office for the District of New Jersey announced criminal charges against Goldman and Eikenberry.

The SEC previously charged four other individuals and two entities in connection with the Nonko fraud. Two of those individuals, Naris Chamroonrat and Adam Plumer, have settled the SEC’s charges. Chamroonrat also pled guilty in a parallel criminal case and is awaiting sentencing. Criminal charges against two other individuals charged by the SEC, Yaniv Avnon and Ran Armon, are pending.

The SEC charged the former chief commercial officer of Qualys, Inc., a cloud security and services company, with insider trading by tipping his brothers in advance of the company’s announcement of poor financial results, thus helping them avoid losses of over $500,000.

According to the SEC’s complaint, Amer Deeba gifted his two brothers Qualys shares in 2005.

When Deeba learned that Qualys had missed its internal Q1 2015 sales forecast, he informed his brothers about the miss the next day and contacted his brothers’ brokerage firm to coordinate the sale of all of his brothers’ Qualys stock.

When Qualys publicly announced its financial results, it reported that it had missed its previously announced first-quarter revenue guidance and that it was revising its full-year 2015 revenue guidance downward. On the same day, Deeba sent a message to one of his brothers saying, “We announced the bad news today.”

The next day, Qualys’ stock price dropped 25%. Although Deeba made no profits from his conduct, Deeba’s brothers collectively avoided losses of $581,170 by selling their Qualys stock.

Under the terms of his settlement, which is subject to court approval, Deeba will be barred from serving as an officer or director of any SEC-reporting company for two years and will pay a $581,170 penalty.