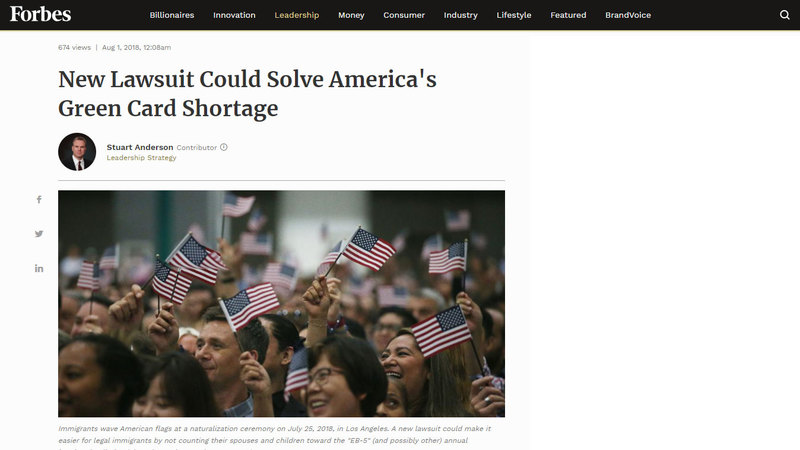 Immigrants wave American flags at a naturalization ceremony on July 25, 2018, in Los Angeles. A new lawsuit could make it easier for legal immigrants by not counting their spouses and children toward the "EB-5" (and possibly other) annual immigration limits.

It can take forever to get a green card. The National Foundation for American Policy estimates wait times for permanent residence in some family and employment categories can range from decades to beyond the lifetime of a normal human being. What if a new lawsuit changed that?

On July 25, 2018, the firm of Kurzban Kurzban Weinger Tetzeli and Pratt P.A. filed a lawsuit in the U.S. District Court for the District of Columbia (Feng Wang, et al. v. Michael R. Pompeo) that challenges the way the federal government counts spouses and children when calculating the annual limit for the EB-5 (employment-based fifth preference) immigration category. David Bier at the Cato Institute, who I’ve worked with on several numerical analyses, estimates if the lawsuit is successful it would significantly reduce wait times for many immigrants.

I interviewed Ira Kurzban, a well-respected immigration lawyer and author of Kurzban’s Immigration Law Sourcebook, to learn more about the lawsuit and its potential impact on the lives of many people.

Stuart Anderson: Why did you file the lawsuit?

Ira Kurzban: The purpose of the lawsuit is to challenge the method by which the Department of State allocates visas under the EB-5 program. At present, the Department of State counts an investor and each family member (spouse and children) when issuing visas. This means that for a family of four each time an investor is granted a visa each family member is also allocated a visa, thus reducing the 10,000 quota by four instead of one.

As a result of this policy, backlogs have been created that have resulted in the separation of families because children of investors have to wait years to receive visas and become ineligible when they reach 21 and age-out of the process. In addition, the waiting time for someone from China, who invests $1 million or $500,000 in the U.S. and creates 10 jobs for U.S. workers, is now 10 to 15 years before he or she can obtain a visa. Under these circumstances, the entire EB-5 program is jeopardized. After all, who would invest those amounts of money to wait 10 or 15 years before they can enter the U.S. and with the certainty that their children will turn 21 and lose the right to immigrate with them?

Anderson: Based on a reading of your motion for preliminary injunction, is it fair to say the primary target of the lawsuit is the State Department’s “counting policy”?

Kurzban: Yes. We believe the policy is contrary to the EB-5 statute, which authorizes 10,000 visas to create 100,000 jobs for U.S. workers. Under the current counting policy less than 3,500 visas are actually allocated to investors.

Anderson: What in the legislative history gives you hope the lawsuit will prevail?

Kurzban: The legislative history is quite clear that in 1990 Congress passed the immigrant investor statute to secure 10,000 visas for foreign investors who would create 100,000 jobs. Statements in both the House and the Senate reflect this view.

Anderson: What other legal arguments are you making?

Kurzban: We believe the counting policy was contrary to the statute (“ultra vires”), violated the notice and comment provisions of the Administrative Procedure Act because they did not publish this policy and give the public an opportunity to comment on it, and is arbitrary and capricious because it undermines the very purpose of the statute, which is to bring a substantial amount of money into the U.S. and create jobs for U.S. workers. By reducing the actual number of investors and creating backlogs that go on for years, the Department of State’s counting policy undermines the very purpose of EB-5.

Anderson: Do you you think the case and arguments you are making in the case about not counting spouses and children would apply to the other categories within the employment-based preferences (EB-1, EB-2, EB-3)?

Kurzban: Our case focuses solely on EB-5 because we believe the statute and legislative history clearly demonstrate the Department’s policy is in error. However, if we are successful it would be a powerful precedent to challenge the counting policy in the other employment-based categories, including EB-1, EB-2 and EB-3.

Anderson: What about the family preferences?

Kurzban: The situation is the same for family preferences. The current method of counting spouses and children of primary applicants and applying their applications to the overall worldwide quota means that fewer families are able to immigrate to the U.S. It undermines the basic principles of family reunification at the heart of the Immigration and Nationality Act. If a challenge was successful, it would also be a solution to the current refusal of the Republican majority to allocate more visas in the employment and family-based categories. If visas were counted as intended and family members were not counted in the worldwide quota many more visas would be available without creating additional visas.

Anderson: Given that the Immigration Act of 1990 was written almost 30 years ago, why do you think this is the right time to challenge the executive branch’s interpretation of the law?

Kurzban: For 30 years there has never been a legal basis to the Department of State’s counting policy. In fact, the policy itself is not enshrined in law but is simply a notation in the Foreign Affairs Manual. It has never had the force of law. In addition, the negative consequences of this policy only recently became known when the Chinese investors were hit by the backlog in May 2015.

Anderson: If your lawsuit is successful, how do you think it would affect the lives of families waiting to receive permanent residence and become immigrants to America?

Kurzban: If we win the lawsuit, children will be able to live in America with their parents. It will revive the EB-5 industry that due to the backlog is facing financial collapse and it may require the Department of State to reevaluate its counting policy across all business and family visas. It will change the lives of tens of thousands of families now and in the future.