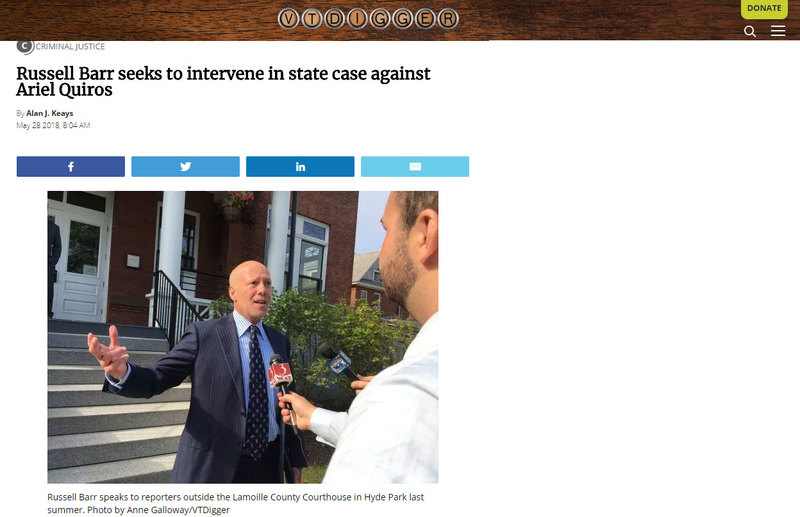 An attorney for a group of EB-5 investors has taken a new legal tack since a judge threw out his case last month.

Russell Barr, of the Stowe-based Barr Law Group, filed a recent motion in Washington County Superior civil court to intervene in a lawsuit brought by the state more than two years ago against Jay Peak’s former owner Ariel Quiros.

That filing is part of a flurry of legal activity that has happened in Vermont and Florida in recent weeks as a series of investor fraud cases related to Quiros, a Miami businessman turned Green Mountain State ski resort mogul, wend their way through state and federal courts.

Barr claims in his filing that he and his firm are in a better position than the state to represent the investors who say they were defrauded by Quiros and his former business partner Bill Stenger, the resort’s former CEO and president.

“The suggestion that the State can adequately represent the interests of our clients is absurd,” Barr said in a statement, adding that his clients “understandably do not trust the state.”

Nearly a year ago, Barr filed a lawsuit in Lamoille County Superior civil court in Vermont on behalf of a handful of investors, including Tony Sutton, a British investor, against 10 state officials and two agencies, claiming they were complicit in the alleged fraud carried out over an eight-year period by the two Jay Peak developers.

That 16-count lawsuit brought by the investors included allegations against the state of negligence, fraud, willful misconduct, breach of fiduciary duty and breach of contract.

In the new filing, Barr is seeking to represent the interest of investors in a state lawsuit against Quiros and Stenger.

The state accuses the two developers of misusing $200 million of the more than $350 million they raised through federal EB-5 immigrant investor program. That money was meant to fund massive upgrades at Jay Peak as well as developments in the other Northeast Kingdom communities of Burke and Newport. The state lawsuit was filed against Quiros and Stenger after the Securities and Exchange Commission charged the two men with 52 counts of fraud.

Barr says the state has taken “positions directly adverse to our clients and the public trust of our State,” and have “completely failed to be forthright with public disclosure of evidence.”

He wrote in the 10-page filing that he is seeking to intervene to ensure that the investors interests are “adequately” represented.

Barr points to a $5.95 million settlement the state reached in 2016 with Raymond James & Associates Inc., a financial institution which was used by Quiros in Florida with branches in Vermont, as an example of how the state has misrepresented the investors.

According to the terms of the settlement, $4.5 million will be used to reimburse investors who lost money in the Jay Peak scandal, $200,000 that will go toward the cost of the investigation, and a $1.25 million administrative penalty will be directed to the state general fund.

Barr says state officials did not adequately protect investors in the eight Jay Peak projects in the first place and therefore the state shouldn’t have pocketed $1.25 million penalty. If the state was looking out for the interests of the investors that money would have been made available to the defrauded investors, he says.

“The Jay Peak investors possess rights and interests in the recovery of any judgment in this action because any alleged money misappropriated by defendant Quiros, or any other defendants, was initially invested by the Jay Peak investors and not by the state of Vermont,” Barr wrote in the filing.

Assistant Attorney General Kate Gallagher, who is representing the state in the action against Quiros and Stenger, said in an interview that the state will be opposing Barr’s motion to intervene in the case.

“We understand and appreciate that they want to represent their clients zealously, we get that, but we feel that an enforcement action is an inappropriate mechanism or vehicle to do that,” she said. “We don’t think it’s necessary.”

Quiros and Stenger earlier this year settled claims with the SEC. Quiros agreed to surrender $81 million in assets to the federal government, including his interest in Jay Peak. Stenger agreed to pay a $75,000 penalty to SEC.

Both the SEC case against the two developers and the enforcement action brought by the state of Vermont were filed in April 2016. While scores of filings took place in the federal case prior to the settlements earlier this year, the state did not actively pursue the case until after the SEC settlements.

Much of the legal battling in the state case since the SEC settlements has centered on a bid by the state to freeze Quiros’ remaining assets, valued at between $5 million and $10 million.

Visconti said freezing Quiros’ assets would hinder his ability pay for legal representation in the civil lawsuit, as well as any potential criminal charges.

Federal prosecutors in Vermont have not filed criminal charges in the case after two years of investigation, and it’s unclear, when, or if, any ever will be brought. In other EB-5 fraud cases of this magnitude, criminal charges have been brought against perpetrators. The Jay Peak fraud is the largest in the history of the EB-5 program.

Visconti has since filed a motion asking Teachout to reconsider her ruling, or allow for appeal of that decision to the Vermont Supreme Court.

On behalf of the state, Gallagher submitted a filing on Friday calling on the judge to uphold the ruling and not allow an appeal to the state’s highest court.

Meanwhile, in other legal action associated with cases involving the EB-5 related scandal that has played out in northern Vermont.

Barr is appealing to the Vermont Supreme Court the ruling by Lamoille County Judge Thomas Carlson who dismissed the action brought by the group of EB-5 investors against the 10 state officials and two state agencies.

He is also asking that the matter be taken up by the full five-member court, not just a three-justice panel, citing the “novel” nature of the case.

“The novel fact situation is premised on a state agency engaging in a near-exclusive private enterprise without state statutory authority to do so,” Barr wrote.

“These novel facts present a situation that may establish a new rule of law or modify an existing rule,” according to the filing, “which includes, but is not limited to applying the private analog analysis of sovereign immunity to individuals that operate an immigration program under a federal license, how sovereign immunity applies to a breach of contract by state government, and the application of state securities laws to government employees.”

In his ruling dismissing the case, Carlson wrote that he recognized “the scale of the alleged harm done to investors” as a result of the $200 million fraud at Jay Peak Resort under the auspices of the state-run Vermont EB-5 Regional Center. However, he added, that the five investors in the case have recouped their losses through a lawsuit brought by the receiver in the Jay Peak case.

A federal judge in Florida last month threw out a proposed class-action investor fraud lawsuit against Quiros and a bank he used.

The lawsuit, led by Brazilian investor Alexander Daccache, accused Quiros and People’s United Bank in an alleged scheme to improperly use millions of dollars in investor funds meant to pay for developments at Jay Peak and Burke Mountain ski resorts, as well as projects in Newport.

The case had been on hold for months when one of the defendants, Raymond James & Associates Inc., reached a nearly $150 million settlement with Michael Goldberg, a court-appointed receiver now overseeing the assets at the center of investor fraud allegations brought by federal and state regulators.

Raymond James was another financial institution used by Quiros.

The lawsuit by Daccache and other investors alleged People’s played a role in a scheme to defraud them.

“People’s Bank transferred investors’ escrow funds in flagrant violation of the terms of the offering documents and escrow agreements, and in doing so, breached its agreements as well as fiduciary duties it owed to the investors,” Thomas Tucker Ronzetti, an attorney for the investors, wrote in a motion earlier in the case opposing the bank’s bid to be dismissed from the proceeding.

The attorney added, “People’s Bank was a substantial and active participant in a massive fraud that caused millions of dollars in damages to Plaintiffs and the Class.”

People’s, in court filings, denied wrongdoing, and had argued in part that the federal court in Miami lacked jurisdiction over the bank, a non-Florida resident which does no business in the state and has no offices there. People’s is headquartered in Bridgeport, Connecticut.

Judge Federico A. Moreno, in dismissing the case, agreed with the argument that it lacked jurisdiction over People’s, suggesting that Vermont may be more a appropriate venue for such a case.

The judge added that the lawsuit contained “conflicting allegations” as to which parties took part in the alleged fraud, and lacked specifics, such as dates of actions.

Moreno also wrote that the investors lacked standing to bring such a lawsuit, adding that doing so would allow them to “double dip” on recouping losses, citing previous settlements reached in other cases tied to the scandal.