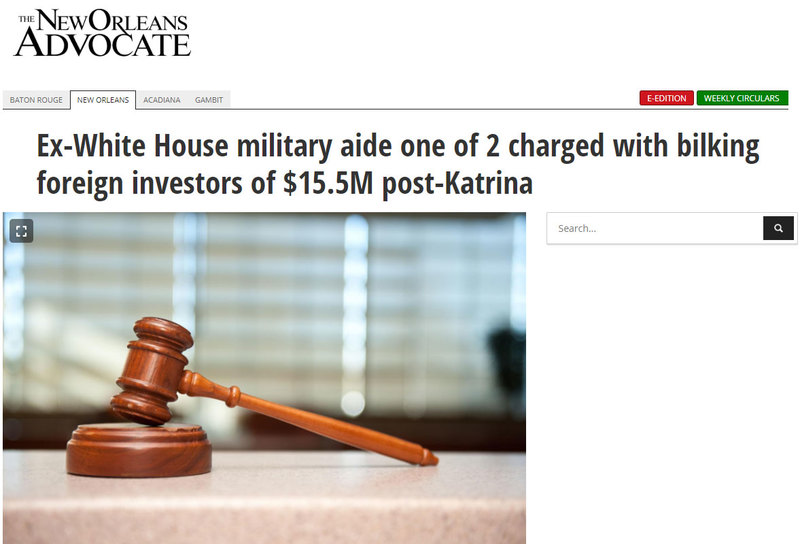 A former top military aide to three U.S. presidents and his business partner made a simple pitch to foreign investors: Pump money into post-Katrina rebuilding efforts in New Orleans and get an easy path to a green card allowing them to stay in the U.S.

But rather than using the money to build a promised hotel complex in Algiers, retired Air Force Col. Timothy Milbrath and William B. “Bart” Hungerford Jr. spent it buying things like half-million-dollar homes for themselves, federal prosecutors say.

A grand jury in New Orleans handed up a raft of fraud charges Friday against Milbrath, 62, and Hungerford, 57, and they could face years in prison and hundreds of thousands of dollars in fines if convicted.

At the center of the case is the so-called EB-5 visa program, which allows immigrants to obtain permanent residency if they invest at least $500,000 in a U.S. company that within two years creates jobs for 10 Americans in an area with a high unemployment rate.

New Orleans was one such area following its devastation by Hurricane Katrina in 2005. And in October 2006, then-Mayor Ray Nagin’s administration signed a contract giving a company founded by Milbrath and Hungerford the exclusive right to link EB-5 visa hopefuls with local projects in which to invest.

The company, NobleOutReach, collected $15.5 million from 31 immigrants from countries such as China, Turkey, Jamaica, Iraq, Singapore, the United Arab Emirates and the United Kingdom.

Milbrath and Hungerford, of Maryland, bought into several coffee shops and bars that brought jobs to some of the areas in New Orleans that Katrina least affected, so none of that helped the investors’ quest for green cards, according to reports from WWL-TV.

Plans to build a hotel, conference center and WOW Cafe & Wingery on an empty lot in the 3000 block of Gen. de Gaulle Drive in Algiers were supposed to help the investors’ status in the EB-5 program.

Yet the complex never materialized, despite a groundbreaking ceremony that featured live music, dancing, and speeches from city and state politicos.

Among other things, federal authorities say, Milbrath and Hungerford instead used the money to pay their and their wives' salaries — roughly $210,000 each one year.

Some of the money also helped Milbrath buy a $580,000 vacation home in Delaware, the indictment says, and Hungerford allegedly used some of it to buy a $490,000 home in Virginia that he then rented to his relatives.

Milbrath and Hungerford claimed that checks they wrote for themselves from investor funds were loans and loan repayments. To hide where the money was actually going, they set up an elaborate web of companies and lied to federal immigration officials as well as New Orleans leaders, prosecutors allege.

Investors filed a lawsuit in 2014 in New Orleans’ Civil District Court seeking damages from Hungerford, Milbrath, their wives and various companies. The plaintiffs argued that the scam robbed them of money and left them facing deportation proceedings when their visas expired and the jobs required for them to get green cards weren’t created.

Some of the plaintiffs had settled before the feds charged Milbrath and Hungerford on Friday with five counts of wire fraud plus counts of plotting to commit mail and wire fraud, commit immigration fraud and launder money.

Through the years, there have been a number of fraud cases involving the EB-5 visa program.

A message left at a telephone number associated with NobleOutReach was not returned. An attorney for the investors who sued Hungerford and Milbrath didn’t respond to a request for comment either.

Nagin in 2014 was sentenced to 10 years in prison following his conviction on corruption charges.