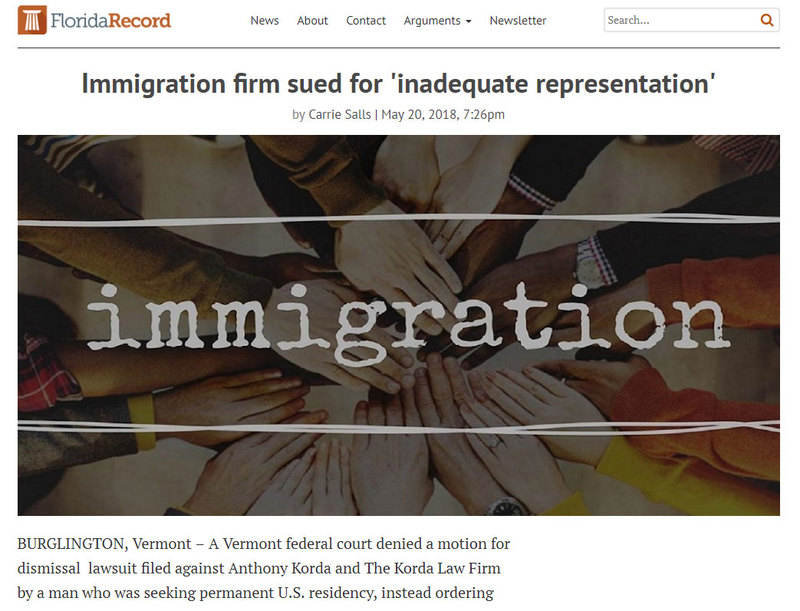 A Vermont federal court denied a motion for dismissal  lawsuit filed against Anthony Korda and The Korda Law Firm by a man who was seeking permanent U.S. residency, instead ordering that the case be moved for jurisdictional purposes to the U.S. District Court for the Middle District of Florida, according to an opinion filed on May 8.

Plaintiff Felipe Accioly Vieira clamed in his Aug. 25 lawsuit filed in the U.S. District Court for the District of Vermont that “Korda and his law firm failed to adequately represent and advise Vieira while he sought, under the EB-5 Immigrant Investor Program administered by U.S. Citizenship and Immigration Services (USCIS), to secure permanent residency in the United States by investing in Jay Peak in Jay, Vt.”

Vieira is suing Korda for more than $2 million in damages.

The Vermont court said Korda claimed that “this court lacks personal jurisdiction because Korda ‘practices federal immigration law, handled outside of Vermont, without reference to Vermont law’ and because Korda’s representation of Vieira was limited to preparing Vieira’s EB-5 application.”

In response, the district court said Vieira argued that all of the legal work Korda performed for the plaintiff was related to Vermont matters, and that “ Korda benefited from an ongoing business relationship with Jay Peak.”

U.S. Magistrate John M. Conroy wrote in his May 8 opinion, however, that Vieira did not do enough to prove that Korda and the firm’s work was sufficiently related to Vermont to justify a finding that the Vermont court had jurisdiction in the case.

“Rather than dismissing the action without prejudice, however, the court concluded that the interests of justice warrant transfer of this case,” Conroy wrote in his opinion.

The opinion said neither Vieira nor Korda requested a transfer of the case, and Vieira did nothing wrong in originally attempting to have the case heard in Vermont.

“It does not appear that Vieira unreasonably sought venue in Vermont, and he did not do so in bad faith,” the opinion said. “Instead, he commenced this action in Vermont because he is a Vermont resident seeking redress in the most convenient forum to him.”