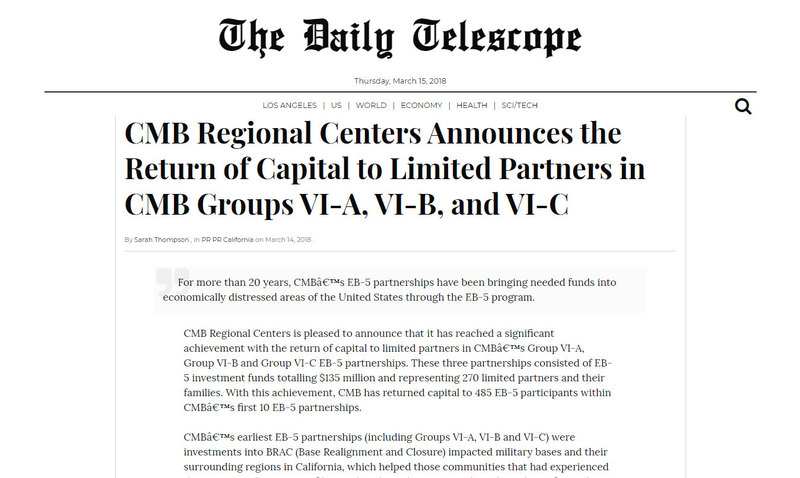 For more than 20 years, CMBs EB-5 partnerships have been bringing needed funds into economically distressed areas of the United States through the EB-5 program.

CMBs earliest EB-5 partnerships (including Groups VI-A, VI-B and VI-C) were investments into BRAC (Base Realignment and Closure) impacted military bases and their surrounding regions in California, which helped those communities that had experienced the economic devastation of losing the jobs and commerce the military bases formerly provided to the communities for decades. Groups VI-A, VI-B and VI-C are the culmination of $282 million in EB-5 investment through CMB Regional Centers that occurred within San Bernardino and Sacramento Counties, which restored two former military bases into job creating engines that now boast more jobs than what existed before the military bases were closed. These communities continue to transition into successful business hubs and industrial parks and are currently home to many employers and thousands of new jobs.

For more than 20 years, CMBs EB-5 partnerships have been bringing needed funds into economically distressed areas of the United States through the EB-5 program. We are proud of the success we share with our partners, investors and their families. We are also very gratified to see the successful creation of American jobs at McClellan Business Park that have resulted from the use of our investors investments and participation in the EB-5 program, said Pat Hogan, Founder and CEO of CMB Regional Centers.

Recognized as one of the oldest active EB-5 Regional Centers, CMB has raised over $2.8 billion in EB-5 investment capital that has been combined with approximately $10 billion in public and private funds. This combination of capital and the multiplying effect of spending is projected to generate over 143,000 (direct, indirect, induced) new American jobs through projects funded since 2007. To date, nearly 5,200 EB-5 participants from 90 countries have chosen CMB Regional Centers. Over 4,200 of these individuals have received their I-526 approval and over 900 have received their I-829 approval.