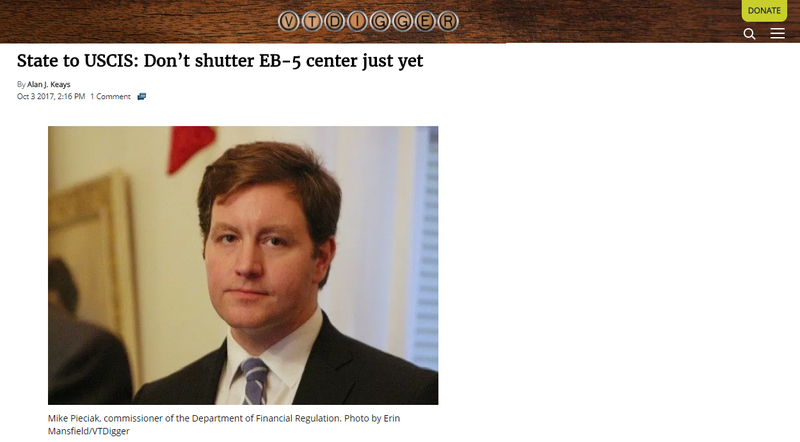 Vermont officials are asking the federal government to reconsider a decision to immediately shutter the state-run EB-5 regional center.

The Department of Financial Regulation contends that a slower approach would better protect immigrant investors and the developers of projects already in the pipeline.

The U.S. Citizenship and Immigration Services, the federal administrator of the EB-5 program, sent a notice to the state in August threatening to terminate the center, which is under the cloud of the largest fraud case in the history of the immigrant investor visa program.

Mike Pieciak, the commissioner of financial regulation and commercey agency officials, in a response to USCIS, argues that the Vermont EB-5 Regional Center has taken steps to prevent investors from being defrauded in future. They argue that it would be best to “wind down” the regional center’s operations over time. The state has asked for a meeting with USCIS officials to further discuss the matter.

“We propose that USCIS work collaboratively with the State to implement the (Vermont EB-5 Regional Center) Wind-Down, thereby meeting USCIS’s goal of ensuring that the Program promotes economic growth, fostering such growth in Vermont during a transition period, and protecting innocent investors,” the response from the state to USCIS reads.

If USCIS moves to shut down the center, Pieciak says the state will appeal the decision to the Department of Justice.

“An administrative law judge would examine the decision by the agency, review the standards and make a determination,” Pieciak said in an interview.

The state’s reply was signed by attorney Robert Divine, an EB-5 immigration attorney who leads the immigration practice group of Baker Donelson, Bearman, Caldwell & Berkowitz, PC, based in Chattanooga, Tennessee.

USCIS is seeking to immediately terminate the operation of Vermont’s EB-5 Regional Center because of the alleged fraud at Jay Peak involving the misuse of hundreds of millions of dollars in EB-5 investor money by two Vermont developers over an eight-year period.

Jay Peak’s former owner Ariel Quiros and its former president Bill Stenger are accused in federal and state lawsuits of using investor funds to buy the resort. They then allegedly perpetrated a “Ponzi-like” scheme in which they commingled funds and used money from new investors to pay backfill the cost of projects for previous investors. The Securities and Exchange Commission brought 52 counts of securities fraud against Quiros and Stenger who are accused of misusing $200 million in EB-5 investor funds in eight projects through the EB-5 program. The investments were meant for massive improvements at the Northeast Kingdom ski resort, another resort in the region and a biomedical facility.

The fraud occurred under the noses of the state officials who were supposed to be overseeing the projects and ensuring that investor funds were protected. State officials deflected and ignored questions about the finances at Jay Peak raised by EB-5 experts, former business partners and investors. The director of the Vermont EB-5 Regional Center questioned the motives of the people who raised red flags and instead of investigating allegations about Stenger and Quiros’ financial improprieties, actively promoted the Jay Peak projects to investors. Gov. Peter Shumlin traveled to China on a $100,000 junket to pitch the projects to investors and appeared in a promotional video in which he said the state audited the Jay Peak developments. The projects, however, were never audited by the state or anyone else, according to federal regulators who testified in Miami district court last year.

The 27-page USCIS notice of termination contains sharply worded criticism of the Vermont EB-5 Regional Center, which did not take immediate action to protect investors.

Foreign investors in those EB-5 funded projects put up at least $500,000, plus a $50,000 administrative fee. The investment had to lead to the creation of 10 jobs in order for an investor to become eligible for permanent U.S. residency.

“It appears that for years (the Vermont Agency of Commerce and Community Development Regional Center) relied excessively — if not primarily — on third party project managers to perform oversight functions rather than taking on those responsibilities itself,” USCIS officials wrote.

“Even where a regional center has an outside party providing management services — as occurred here — the ultimate responsibility for compliance with the relevant statutes and regulations, remain with the regional center itself.”

Ultimately, USCIS has determined that “by a preponderance of the evidence that the Regional Center no longer serves the purpose of promoting economic growth.”

The Scott administration conducted a review of the Vermont EB-5 Regional Center and the results were released at the same time as the USCIS notice of termination.

That report also recommended closing the center, but over time.

“It is clear from our review that state government was not, and is not, the best-suited entity for managing the EB-5 program,” said Michael Schirling, secretary of the state commerce agency.

Neither the state nor USCIS provide specific timeframes for closing the EB-5 regional center. However, it’s clear from the notice of termination that USCIS wants to do so almost immediately. The state, on the other hand, supports closing the regional center as current projects work through the system, and says it won’t take on new one.

In its recent response to USCIS’s notice of termination, the state points to reforms to the operations of its regional center in 2014 to provide greater and more “rigorous” financial oversight of EB-funded projects.

The response also stated that the USCIS “acknowledges” in its termination notice that no employees of the regional center or the state “were involved in the alleged fraud” at Jay Peak.

“The State’s new compliance efforts have been in effect for almost three years and should give USCIS confidence that (Vermont Regional Center) projects are being adequately monitored,” Divine wrote.

He added, “The State and USCIS have a common goal in winding down the operations of the (regional center). The only difference is in timing and approach.”

The state in its response also takes aim at USCIS for not basing its termination decision on standards or laws, but, at least in part, on unsubstantiated claims and reports. The state reply stated that the USCIS lacks specific laws, standards or oversights requirements for regional centers to meet.

“It would be inappropriate and unreasonable for USCIS to sanction the (Vermont Regional Center) for violation of standards that USCIS never has articulated in the 25 years of the regional center program, and thereby also punish innocent investors, in the name of promoting economic growth through the Program,” state officials write.

In addition, the state’s response points out that USCIS in its notice to terminate relied on VTDigger news reports, without attempting to independently verify the information contained in the articles.

“Terminating the (regional center) based on newspaper articles is unreasonable, arbitrary, and capricious,” the state’s response reads.

Also, the state claimed, allegations contained in the USCIS termination notice cite allegations from lawsuits brought against Stenger and Quiros by the SEC, state regulators and other investors that have not been adjudicated by a court.

“While the State stands by its complaint, it denies the allegations in the Investor complaint,” the state’s response reads. “The SEC and State complaints do not allege any wrongdoing or lack of oversight by the (Vermont Regional Center) or any State actor, and thus do not support termination.”

The state pointed to EB-5 funded projects at Mount Snow in Wilmington and another at Trapp Family Lodge in Stowe that are currently ongoing that would suffer if the doors of the regional center are closed.

Executives of both Mount Snow and Trapp Family Lodge sent letters in support of the state’s position that accompanied the Vermont’s response to USCIS.

“(T)erminating the (regional center) may either leave Trapp and/or Mt. Snow investors with no immigration benefits, or obligate Trapp and/or Mt. Snow to undertake efforts to refund those investors,” the state’s response read. “The latter would be costly and harmful to those businesses, as it would likely require the businesses to access capital at potentially high costs to accomplish refunds and result in the loss of jobs in the region.”

However, Mount Snow officials have also said the company will seek its own designation as an EB-5 regional center in order to complete additional-phase projects at the resort, citing past “troubles” related to Jay Peak.

In a footnote in its response, the state also addressed that point.

The footnote stated that USCIS claimed Peak Resort would not work with the Vermont Regional Center on the next phase of the Mount Snow project, and that its executive Dick Deutsch reportedly told investors he wanted to “divorce” Mount Snow from the state’s EB-5 “troubles.”

Russell Barr, an attorney for investors suing the state over its role in the Jay Peak fraud case, submitted his own letter to USCIS as an “interested party.” He urged the federal entity to move forward with terminating the Vermont Regional Center.

“In sum, what the State and the (Vermont Regional Center) propose is for the precise individuals who oversaw the fraud to reorganize and continue to oversee the EB-5 program,” Barr wrote.

“Therefore, the aforementioned ‘oversight issues’ are still very much present and demand the immediate closure and investigation of the (Vermont Regional Center).”

Barr, also the owner of Stowe Aviation, had planned to use EB-5 immigrant investor funding, along with other private capital, to fund upgrades, including a new terminal at the state-owned Morrisville-Stowe State Airport.

He later withdrew that application earlier this year, saying at the time the state EB-5 regional center lacked credibility. The state, in its recent response to USCIS, says that Stowe Aviation and the Vermont Regional Center “mutually” terminated a memorandum of understanding.

Michael Goldberg, the court-appointed receiver overseeing the EB-5 projects and other assets related to the developments by Stenger and Quiros, also wrote a letter backing the state’s position.

He wrote that an “orderly wind down” of the regional center operations would protect those immigrant investors with pending U.S. residency applications. Those include one investor in the Stateside project at Jay Peak, 71 investors in the Burke Mountain Hotel & Conference Center and 75 investors in a failed biomedical center proposal, known as AnC Bio Vermont, that had been planned for Newport.

The receiver added that he believed “sufficient job creation” will be attained to allow those investors in Stateside project and Burke to meet their needed requirements.

Also, Goldberg wrote, he is exploring the possibility of “redeploying” funds from AnC Bio investors into a different project to meet the job creation requirements for those who agreed to have their funds put toward that project.

“In short, I believe that each of the defrauded investors will be able to meet USCIS’s requirements in order for them to obtain a green card,” Goldberg wrote. “However, if the (Vermont Regional Center) is terminated, all my efforts to date with respect to helping these victims achieve their desired immigration status will be for naught.”