Report suggests special access in handling of visas for foreigners investing in U.S.

A top Department of Homeland Security official created an appearance of favoritism and special access in his handling of a visa program for foreigners who invest in the U.S., according to a report from the department’s inspector general.

In three cases involving the EB-5 visa program, the report says Homeland Security Deputy Secretary Alejandro Mayorkas intervened and altered decisions when he was director of the U.S. Citizenship and Immigration Services from 2009 to 2013.

“Mr. Mayorkas communicated with stakeholders on substantive issues, outside of the normal adjudicatory process, and intervened with the career [Citizenship and Immigration Services] staff in ways that benefited the stakeholders,” the report said.

One of the cases cited involved Virginia Gov. Terry McAuliffe, a Democrat, who in 2010 was chairman of a venture to build electric cars with funding from EB-5 investors. Mr. Mayorkas’s intervention in that case, which influenced an agency decision on the matter, was unprecedented, according to the report. 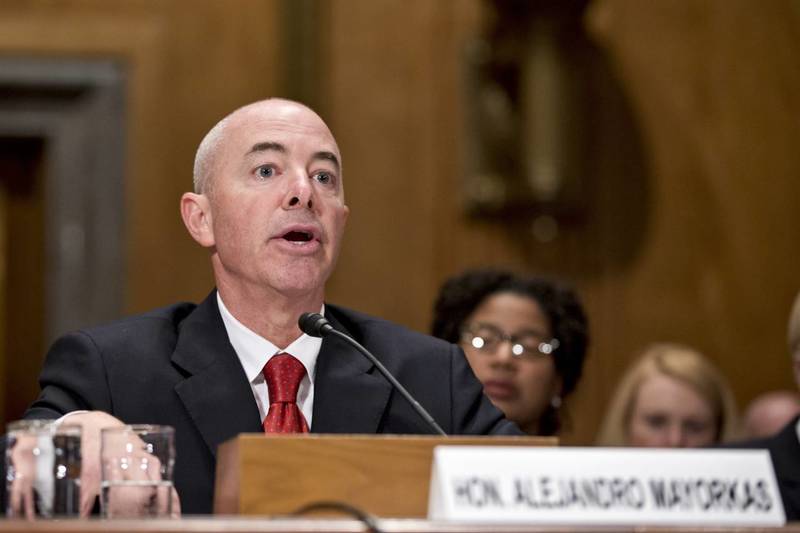 Staff of Citizenship and Immigration Services perceived the intervention as politically motivated because of the political prominence of the individuals involved, the report said.

In a statement accompanying the inspector general’s report, Mr. Mayorkas said that “a complete and total repudiation of the allegations against me” was the only correct and just conclusion. He also said Tuesday that while he disagreed with the report, “he would certainly learn from it.”

As for the Gulf Coast matter, “at no point was my involvement premised on the involvement of Terry McAuliffe or any other party to the case,” Mr. Mayorkas said. His involvement in that and other EB-5 cases was limited to consideration of broader legal and policy issues raised, he said.

A spokesman for Mr. McAuliffe said the report demonstrates that the governor, “along with many other individuals and businesses, asked DHS to fulfill its obligation to adjudicate the applications that were before them in a timely fashion.”

Mr. Rodham didn’t respond to a request for comment. Previously, a Gulf Coast representative said the firm complied with all federal regulations.

Under EB-5, a foreigner who invests at least $500,000 in a qualified U.S. business is entitled to permanent residence if the investment puts sufficient numbers of people to work.

Homeland Security Secretary Jeh Johnson said he has full confidence in Mr. Mayorkas, but noted his concerns about the EB-5 program, saying officials are constantly contacted by outsiders, including members of Congress of both parties, on behalf of those with an interest in the outcome of EB-5 cases. USCIS is part of DHS. He said he is asking the department’s general counsel to develop a new protocol for EB-5 evaluations to ensure they aren’t influenced by outsiders and said Congress should make changes he says would prevent meddling.

Mr. Mayorkas’s EB-5 involvement has been the subject of congressional inquiries, particularly regarding the McAuliffe-related venture known as GreenTech Automotive Inc. Rep. Michael McCaul (R., Texas), chairman of the House Committee on Homeland Security, called the inspector general’s report “extremely concerning” and will hold a hearing about it on Thursday.

The report cites two other instances of Mr. Mayorkas intervening in cases involving politically prominent Democrats, including Sen. Harry Reid of Nevada and former Pennsylvania Gov. Edward Rendell. In 2013, Mr. Mayorkas became involved in a Las Vegas hotel project at the request of Mr. Reid, then majority leader of the Senate, to allow expedited review of investor petitions for the SLS Hotel and Casino project despite USCIS staff’s original decision not to do so, the report said. Mr. Mayorkas “also took the extraordinary step of requiring staff to brief Senator Reid’s staff on a weekly basis for several months.”

In his response, Mr. Mayorkas said he learned from senior staff in 2013 the agency wasn’t adhering to published and long-standing criteria on expedited review. He heard from Mr. Reid and his staff around the same time and was involved in the SLS case only to resolve broader legal and policy issues, he said.

A spokeswoman for Mr. Reid said his work on behalf of the SLS project showed his commitment to economic development in Nevada.

“Renovations at SLS infused hundreds of millions of dollars into the Las Vegas region and created thousands of jobs,” she said. “The investments made to secure the SLS project had bipartisan support.”

Mr. Mayorkas also appeared to initially back a staff decision to deny a funding proposal for a film-financing effort in Los Angeles but changed course “after he was in contact with politically prominent stakeholders associated with the venture” including Mr. Rendell, the report said. “Within an hour of the Rendell phone call” in July 2011, Mr. Mayorkas directed his staff to halt funding-proposal denials in the case, it added.

In his statement, Mr. Mayorkas said he had spoken with various people, including possibly Mr. Rendell, regarding the film project.

Mr Rendell didn’t respond to a request for comment.

Mr. Mayorkas, whose family fled Cuba in 1960 when he was an infant, was appointed by President Bill Clinton as the U.S. attorney for Los Angeles in 1998. He held the job for three years, but encountered controversy for his involvement in supporting a commutation Mr. Clinton issued to a convicted drug dealer who was the son of a Democratic donor. Mr. Mayorkas later said that was a mistake. Still, that incident and the long-running EB-5 review contributed to Republican skepticism of his nomination in 2013. He was confirmed largely along party lines.