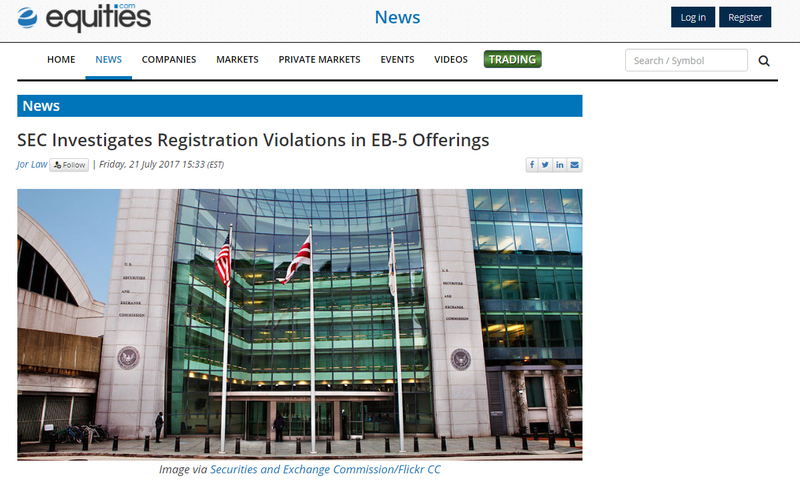 It’s no secret that the Securities & Exchange Commission (SEC) has actively policed the EB-5 industry. Oversight by the SEC has generally been a good thing for the industry as it has brought greater awareness to legal compliance and helped protect investors who might have otherwise been defrauded. Historically, SEC actions have centered around claims of fraud or broker-dealer violations. There are signs, however, that they may bring other claims in the future.

In October 2016, at IIUSA’s 6th Annual EB-5 Industry Forum, SEC’s LA Regional Director, Michele Layne mentioned that they may be looking at registration violations. It was only mentioned once in a long presentation focused largely on other topics, and most of the conference attendees didn’t think about the significance of that comment. In June 2017, at a luncheon organized by the Federal Bar Association, SEC staffers from the enforcement division again noted that they are looking at registration violations. This time, however, they spent significantly more time addressing the topic. It makes sense for the SEC to enforce registration violations. The concept of registration or proper exemption therefrom is at the very heart of securities laws.

In fact, the SEC has previously taken action against unregistered EB-5 offerings. In the SEC’s enforcement action against Luca in July 2016, the SEC alleged that Luca did not properly have any securities exemptions. Luca claimed to rely on the Rule 505 & Rule 506(b) private offering exemptions, but the SEC argued that because Luca generally solicited and advertised its offering, the exemptions didn’t apply and therefore Luca was in violation of the laws for conducting an unregistered securities offering. Unfortunately, most of the EB-5 industry focused on the fraud claims in Luca and largely ignored the unregistered offering claims.

In general, securities offerings must be registered unless they are offered pursuant to a valid securities exemption. At the federal level, EB-5 capital raises have generally relied upon three primary securities exemptions: Rule 506(b) of Regulation D, Rule 506(c) of Regulation D, and Regulation S. In order to properly use those exemptions, specific criteria and guidelines must be followed. If they are not, then the offering would not be exempt and would require registration or another exemption. Unregistered offerings without a valid exemption from registration are illegal.

Jor Law is a co-founder of VerifyInvestor.com, the resource for accredited investor verifications trusted by broker-dealers, law firms, companies, and investors who insist on safety and reliability. These verifications are required by federal laws for generally solicited Regulation D, Rule 506(c) capital raises. Jor Law is also a co-founder of Homeier Law PC, where he practices corporate and securities law, including helping companies take advantage of alternative forms of capital raising such as venture capital, EB-5 finance, Regulation D, Rule 506(c) offerings, Reg A+ offerings, and crowdfunding.