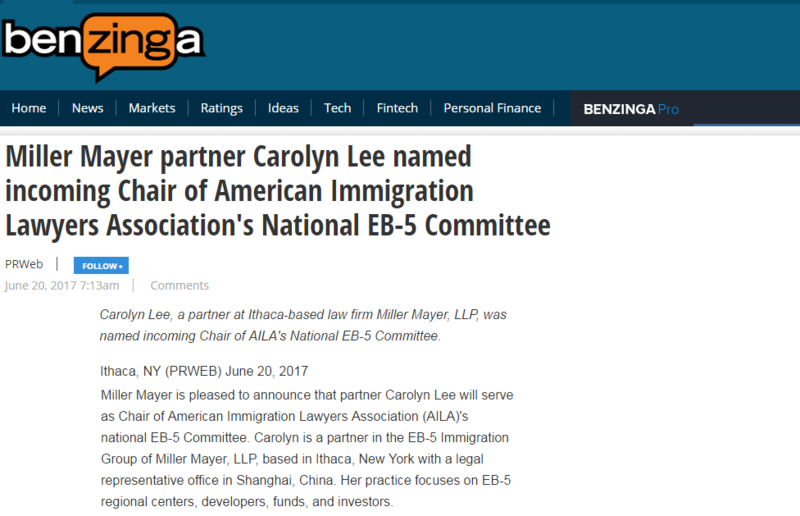 Miller Mayer is pleased to announce that partner Carolyn Lee will serve as Chair of American Immigration Lawyers Association (AILA)'s national EB-5 Committee. Carolyn is a partner in the EB-5 Immigration Group of Miller Mayer, LLP, based in Ithaca, New York with a legal representative office in Shanghai, China. Her practice focuses on EB-5 regional centers, developers, funds, and investors.

AILA is the national association of immigration lawyers with over 15,000 members established to promote justice and advocate for fair and reasonable immigration law and policy. Carolyn served as Chair of the AILA EB-5 Committee from 2012 to 2013 and Vice-Chair and Co-Chair from 2014 to 2016, having served as member since 2009. She also serves on the Public Policy Committee of Invest In the USA (IIUSA), the EB-5 regional center trade association.

Carolyn's years in EB-5 industry leadership have coincided with the most dynamic years in EB-5 program history. Prompted by shortage of traditional capital during the Great Recession, the EB-5 regional center program rocketed in growth in the late 2000s. In fiscal year 2008, there were just over 1,400 EB-5 visas issued. By fiscal year 2014, the roughly 10,000 annual quota on EB-5 visas had been reached. There is currently a multi-year visa backlog, with cases filed in June 2014 only now ready for visa issuance.

In her leadership role, Carolyn has also been integrally involved in commenting on EB-5 legislation and advising industry stakeholders on the meaning and impact of various legislative proposals since 2012. Her legislative advocacy including detailed analysis and proposed language has focused on long-term program reauthorization and workable reform. At every step in the EB-5 program's evolution, she has brought insight on current trends as well as anticipated changes to project and investor clients numbering in the thousands.

At this critical juncture facing new EB-5 legislation and possibly new regulations, Carolyn will continue to advocate for workable changes recognizing the EB-5 regional center program's contributions. Her recent remarks have emphasized the diversity of U.S. enterprises EB-5 capital has supported, including distressed manufacturers, alternative as well as traditional energy development, and urban mixed use projects. The U.S. Department of Commerce in its January 2017 study estimated that in just a two year period between 2012 and 2013, EB-5 investors contributed over $5.8 billion dollars in 562 U.S. projects. The Department of Commerce estimated that these EB-5 projects were expected to create over 174,000 U.S. jobs. Carolyn has stated that "though improvement is welcome as in all things, the EB-5 program has worked extremely well, and stewarded well by our Congressional and industry leaders, can continue to do great things for the U.S. economy and immigrant families."

Carolyn is also proud to celebrate 15 years with Miller Mayer this June. She had practiced corporate, banking and real estate law in New York and Ithaca prior to joining Miller Mayer in 2002. Carolyn's accolades include AILA's Presidential Commendation, AILA's Joseph Minsky Young Lawyer Award, Outstanding 50 Asian Americans in Business Award (2016), and inclusion in The Best Lawyers in America and Who's Who of International Business Lawyers. Carolyn received her J.D. from Cornell Law School where she served as Chancellor of the Moot Court Board, and her B.A cum laude from Williams College. She has been a visiting scholar at Exeter College, Oxford University and is also a graduate of Stuyvesant High School (New York). Her life is made complete by her husband of 16 years, Steve, their two imaginative and spirited boys, and two "gorges" basenjis, Annabelle and Gamer.