How to woo Chinese investors: With visa offers and the Trump name 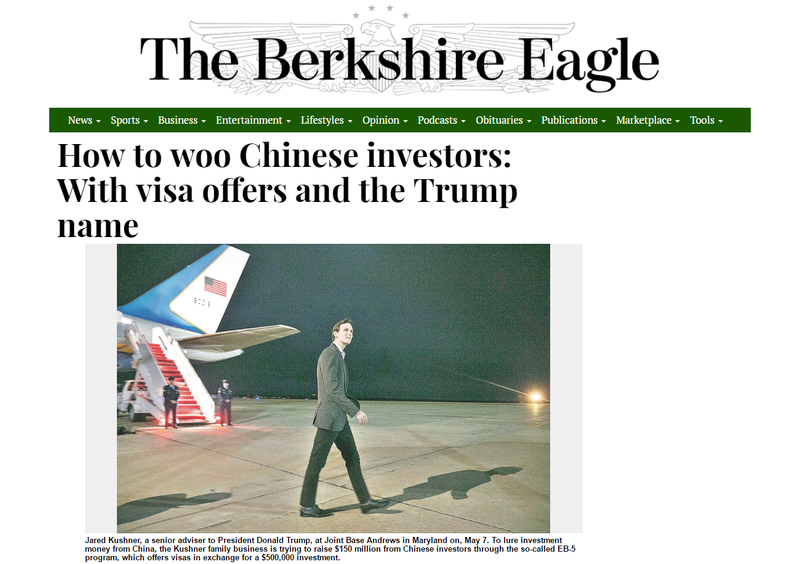 For Chinese citizens, U.S. green cards can be notoriously difficult to obtain. But a Beijing immigration company called Qiaowai tells visa applicants of a secret weapon: It is working on behalf of a real estate firm owned by the family of President Donald Trump's son-in-law and adviser, Jared Kushner.

"They said the president would make sure it came through," said Lu Ling, a technology executive in the southern Chinese city of Guangzhou. "They said there was no chance it could fail."

As it builds two luxury apartment buildings in Jersey City, New Jersey, the Kushner family is trying to raise $150 million from Chinese investors through the B-5 program, which offers visas in exchange for a $500,000 investment. To get it done, the Kushners have turned to a pair of middlemen who have capitalized on a lucrative government program that critics say has little oversight and loose rules.

The companies, Qiaowai and U.S. Immigration Fund, are the go-to matchmakers for big U.S. developers.

They have helped find Chinese investors for many developers' giant projects, including numerous luxury high-rises in Manhattan, a sprawling complex of apartment buildings in Brooklyn, New York, and a golf course in Boca Raton, Florida. Last year, they brought Rudy Giuliani, New York City's onetime mayor, to Beijing to speak to potential investors.

Both firms have faced questions about their tactics.

Qiaowai, with more than 400 employees at its headquarters on the 32nd floor of a high-rise, has trumpeted its political connections and played down the program's financial risks. On the Kushner project, Qiaowai promised safe investments and "guaranteed" green cards, according to emails and text messages sent to clients and reviewed by The New York Times.

U.S. regulators warn against such promises, though foreign firms like Qiaowai are outside the control of immigration authorities in the United States, who oversee the program. Qiaowai declined to comment.

U.S. Immigration Fund, based in Jupiter, Florida, has been accused by a former top executive of improperly using investor visa funds, and its chief executive has had legal troubles. The firm is a leading lobbying force in Washington, spending $820,000 since early 2015 to block changes to the EB-5 program's rules.

The efforts to raise money in China highlight the potential conflicts between Kushner's White House role and Kushner Cos. Although he stepped down as chief executive in January, Kushner still stands to profit from the company's business, since he is the primary beneficiary of trusts invested in most of its projects.

"No one at Kushner Companies was aware of any statement or guarantee," Risa Heller, a company spokeswoman, said in response to questions about Qiaowai. "They did not and would not authorize that kind of language." She declined to answer any questions about U.S. Immigration Fund.

Both immigration firms this week removed from their websites descriptions of Kushner projects. "These are reports for investors and they are still up on the company's password-protected investor portal," said Stu Loeser, a spokesman for U.S. Immigration Fund.

The Kushners' tactics for raising money in China is spurring renewed calls for an overhaul of the visa program. The program began in 1990 as a way to revitalize poor neighborhoods, but has turned into a source of cheap financing for luxury developers. It has garnered a reputation for fraud and abuse. Last month, federal agents executed search warrants in connection with an investigation into an alleged scheme to defraud EB-5 investors from China.

About 75 percent of the 10,000 visas awarded each year go to Chinese investors, who are primarily driven by the desire to get a visa, rather than profits. After fees to middlemen, they generally don't make money.

Kushner's sister, Nicole Meyer, was criticized after mentioning her brother's White House connections when she visited China this month to promote the New Jersey development. Meyer later apologized, saying it was not her intention to use her brother's ties to the Trump administration to lure investors.

But the family's Chinese representatives have repeatedly invoked Trump's name as a selling point.

Qiaowai, which has worked with the Kushners since 2013, describes itself in ads as the company Trump uses to "dig for gold." Its leader, a former banker named Ding Ying, has tried to project an image of proximity to the president, chronicling on the company's website her visit to Washington in January to attend his inauguration. She said she "exchanged a few words" with Trump.

Connecting Qiaowai with the Kushner family is Nicholas A. Mastroianni II, chief executive of U.S. Immigration Fund. A prodigious fundraiser, he claims to have collected more than $1.7 billion in EB-5 money since 2010.

He travels frequently to China, reassuring Chinese investors worried about moving abroad, including helping their children adjust and throwing dinners. He also regularly goes to New York City, via private jet, where he has helped finance megaprojects for some of the city's biggest real estate developers.

The Kushner family has turned to Mastroianni at least twice to finance its ambitions. In 2013, it raised $50 million from 100 investors for a Trump-branded luxury high-rise apartment building in Jersey City, which opened last year. This spring, it announced it would seek the $150 million in EB-5 money for the latest Jersey City project, known as One Journal Square.

In China, Mastroianni found a ready partner in Ding of Qiaowai, who built an empire on sending Chinese families abroad.

Qiaowai, founded in 1999, has flourished as the ranks of wealthy Chinese have surged. Such firms often charge more than $50,000 as a finder's fee, commissions that can add up to tens of millions of dollars on large development projects.

Giuliani factored prominently in Qiaowai's advertising; the company described him to Chinese audiences as the United States' likely next secretary of state. His law firm, Greenberg Traurig, is the main lobbyist for a trade group fighting changes to the rules of the EB-5 program.

Giuliani and his firm did not respond to requests for comment.

Mastroianni's firm was at the forefront of efforts to stop an overhaul of the EB-5 program in 2015 and 2016, lobbying records show. The firm hired former Rep. Ron Klein of Florida, now a lobbyist at Holland & Knight, to make its case on Capitol Hill and court investors in China. Mastroianni's company also used another lobbyist, former Sen. Alfonse M. D'Amato of New York.

For Kushner partners, the election of Trump represented an opportunity.

Qiaowai unrolled a series of advertisements featuring Trump. "For a company that has cooperated with the Trump family," said one ad, "there is no need to defend itself against rumors about fraud and questions like, `Is Qiaowai reliable?'"