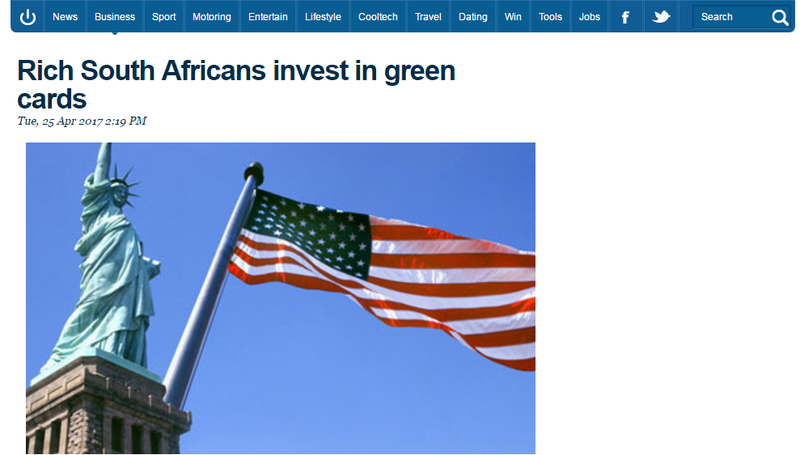 According to information released by the United States Citizenship and Immigration Services (USCIS), South African demand for US EB-5 visas has more than doubled since 2014.

The EB-5 investor visa allows visa holders to obtain a green card for themselves and their immediate family members by investing $500,000 into U.S. businesses provided they create a required number of jobs.

“For the first time, our industry now has access to the actual number of investors who applied, as apposed to just the number of EB-5 visas approved,” said Rogelio Caceres, co-founder of LCR Capital, a private equity investment firm that assists high-net worth investors in acquiring EB-5 visas.

The data is available by country for the last three fiscal years (2016 not available yet).

“This data indicates that the EB-5 market is much larger than we previously thought, and that it’s growing at a rapid pace,” said Caceres.

“We think it’s likely that number will have doubled again in 2016, based on the increased interest we have recently experienced at LCR,” said Caceres.

“Political developments often drive demand in South Africa, and we have again experienced an upswing in requests for information since last week’s cabinet reshuffle.”

The EB-5 visa initiative is administered through the USCIS. It enables foreign investors and their immediate families to obtain American green cards by investing in USA business or real estate projects that create jobs in the US.

This immigration channel is likely to be supported by US President Donald Trump, due to its focus on capital investment and job creation.

Last year, LCR Capital offered South African investors the opportunity to invest in the Dunkin Donuts franchise brand through its private equity fund. This fund proved hugely popular and is now closed to further investments. LCR is currently offering the opportunity to invest in the iconic Miami Surf Club hotel, a 1930s refurbishment whose developers are seeking $100-million in working capital from foreigners, which also qualifies investors for EB-5 visas, due to its guaranteed job creation prospects.