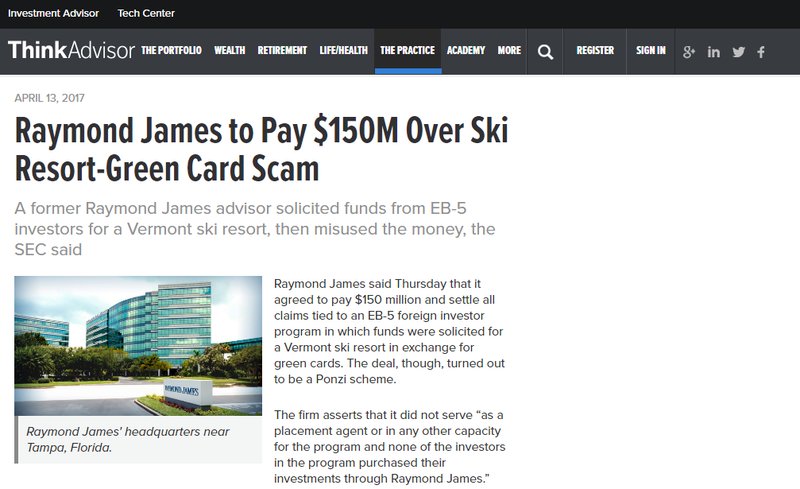 Raymond James said Thursday that it agreed to pay $150 million and settle all claims tied to an EB-5 foreign investor program in which funds were solicited for a Vermont ski resort in exchange for green cards. The deal, though, turned out to be a Ponzi scheme.

The firm asserts that it did not serve “as a placement agent or in any other capacity for the program and none of the investors in the program purchased their investments through Raymond James.”

“Raymond James worked diligently with the [Securities and Exchange Commission]-appointed receiver to structure a settlement that would ensure investors in the program are fairly compensated — either by funding the costs to finish incomplete projects or by returning funds where the underlying construction project is no longer feasible,” it explained in a press release.

“We believe this resolution is fair and representative of our commitment to redressing the victims’ losses in this case,” said General Counsel Jonathan Santelli, in a statement.

The firm also says it has enhanced its supervision program and its anti-money laundering control infrastructure. As of Dec. 31, it had accrued $50 million related to this matter.

“The settlement provides the firm with the right to share in proceeds of certain third-party recoveries that may be obtained by or on behalf of the SEC-appointed receiver or the receivership entities,” it explained.

Joel Burstein, the financial advisor for accounts tied to the scheme, resigned from Raymond James in December. (According to BrokerCheck records, he was with the firm from 2001 to 2016.)

Attorneys representing the investors say that Burstein’s supervisor, Frank Amigo (who was with Raymond James from 2001 to April 11, 2017), also was involved.

Two owners of the Vermont-based Jay Peak Resort — Ariel Quiros, Burstein’s former father-in-law, and William Stenger — solicited $500,000 from each EB-5 investor starting in 2006, according to a 51-page class-action lawsuit filed on behalf of investors in a federal court in Vermont in May 2016.

“Stenger illegally transferred investor funds that were held in escrow accounts at People's Bank to Raymond James accounts that were controlled by Quiros. Quiros then used the funds to, among other things: (1) finance his purchase of the Jay Peak ski resort; (2) back a personal line of credit to pay personal income taxes; (3) purchase a luxury condominium; (4) pay taxes for a company he owns; and (5) purchase another ski resort,” the lawsuit stated.

In April 2016, the Securities and Exchange Commission brought fraud charges and froze the assets of Jay Peak and related businesses for “allegedly misusing millions of dollars raised through investments solicited under the EB-5 Immigrant Investor Program.”

The SEC said Quiros and Stenger “omitted key information” while raising more than $350 million to build a ski resort and biomedical research facility in Vermont.

Money from investors in later projects “was misappropriated to fund deficits in earlier projects,” the SEC explains. “More than $200 million was allegedly used for other-than-stated purposes, including $50 million spent on Quiros’s personal expenses and in other ways never disclosed to investors.”