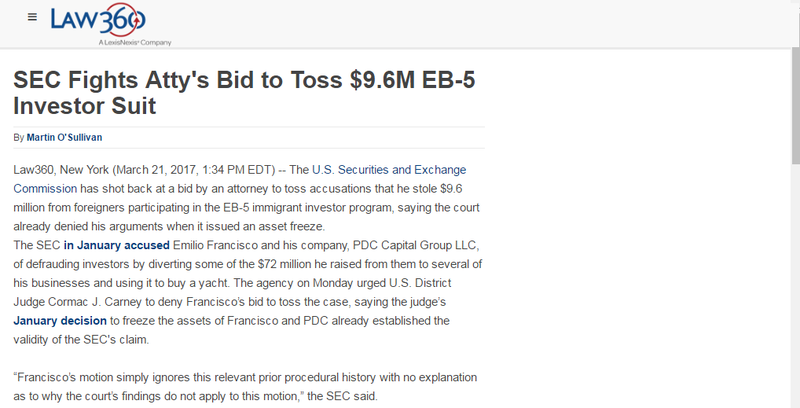 The U.S. Securities and Exchange Commission has shot back at a bid by an attorney to toss accusations that he stole $9.6 million from foreigners participating in the EB-5 immigrant investor program, saying the court already denied his arguments when it issued an asset freeze.

The SEC in January accused Emilio Francisco and his company, PDC Capital Group LLC, of defrauding investors by diverting some of the $72 million he raised from them to several of his businesses and using it to buy a yacht. The agency on Monday urged U.S. District Judge Cormac J. Carney to deny Francisco’s bid to toss the case, saying the judge’s January decision to freeze the assets of Francisco and PDC already established the validity of the SEC's claim.

“Francisco’s motion simply ignores this relevant prior procedural history with no explanation as to why the court’s findings do not apply to this motion,” the SEC said.

The SEC alleged that Francisco raised $72 million from approximately 131 investors between January 2013 and September 2016. The money was to go toward eligible EB-5 projects, including the development of assisted living facilities, the opening of Caffe Primo restaurants and the renovation of a production facility for environmentally friendly agriculture and cleaning products, according to the suit.

But Francisco diverted more than $9 million of the funds to several of his own businesses and used some of the money to buy a yacht, violating the Securities Act of 1933 and the Securities Exchange Act of 1934, the SEC alleged.

Judge Carney in late January issued an injunction against Francisco, PDC and a slew of affiliated entities, forbidding them from violating sections of the Securities Act and Securities Exchange Act, assisting violations of the acts, and buying or selling securities connected to the EB-5 program. The injunction also enjoined them from liquidating assets and destroying evidence.

Francisco in March asked Judge Carney to toss the suit, saying that the SEC had failed to include evidence of the alleged misrepresentations to investors or of Francisco’s direct involvement.

The EB-5 program allows foreign nationals to become eligible for legal permanent U.S. residency if they invest $1 million in a commercial enterprise that generates or maintains at least 10 jobs, or $500,000 if they choose to make the investment in high-unemployment or rural areas.

The government is represented by John B. Bulgozdy and Adrienne Dawn Gurley of the SEC.

The case is Securities and Exchange Commission v. Francisco et al., case number 8:16-cv-02257, in the U.S. District Court for the Central District of California.