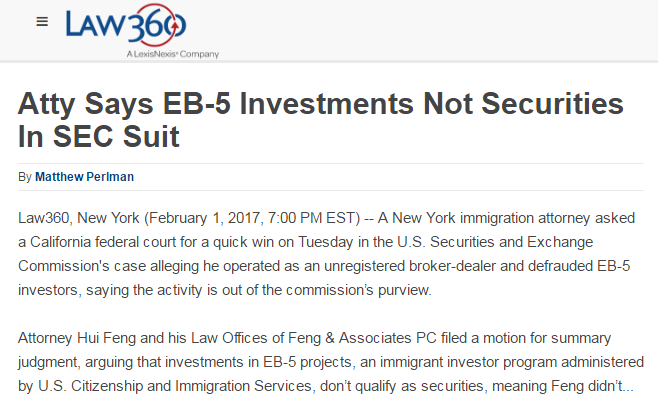 A New York immigration attorney asked a California federal court for a quick win on Tuesday in the U.S. Securities and Exchange Commission's case alleging he operated as an unregistered broker-dealer and defrauded EB-5 investors, saying the activity is out of the commission’s purview.

Attorney Hui Feng and his Law Offices of Feng & Associates PC filed a motion for summary judgment, arguing that investments in EB-5 projects, an immigrant investor program administered by U.S. Citizenship and Immigration Services, don’t qualify as securities, meaning Feng didn’t need to register with regulators as a broker. Lawyers have been helping clients utilize the program to obtain permanent resident status since its inception in 1990, and they’ve never had to register before, he said.

“For over 25 years, immigration attorneys in this country — and on the west coast in particular — have helped foreign applicants navigate the complex EB-5 program and secure permanent legal status in the United States,” the motion said. “As far as defendants are aware, none of those lawyers registered as brokers because there was no suggestion by anyone — not the SEC, the USCIS, any other government agency, or any court — that they were in fact acting as brokers.”

The SEC filed suit against Feng in December 2015, at the same time that the agency sanctioned six other attorneys for similar alleged misconduct involving EB-5 investments.

The attorneys all represented individuals who sought to take part in the federal Immigrant Investor Program, which offers EB-5 visas to foreigners who invest at least $1 million, or $500,000 under certain circumstances, in commercial projects that create or maintain at least 10 full-time jobs.

The SEC alleged the attorneys violated securities law when they steered their clients to particular investment promoters known as regional centers, helped to effect transactions and received commissions from the centers when investments were successful.

In its complaint against Feng, the SEC said that in addition to not registering with the agency, Feng defrauded clients by failing to disclose that he and his firm received commissions for steering investors to EB-5 promoters. The SEC said Feng and his firm gained more than $1.1 million in compensation from five promoters and are slated to receive $3.1 million more.

Feng argued Wednesday that the investments do not constitute securities because federal law requires investors to expect a profit from such instruments. He said the primary concern of his clients, who were mostly Chinese nationals, was to obtain visas, and that they didn’t expect to receive a return on their investments in the projects. This made his main objective identifying projects he believed would meet USCIS’s requirements for job creation, and therefore fulfill his clients’ desires of obtaining permanent residency.

He further argued that the regional centers tacked on mandatory marketing fees that eliminated any chance of his clients receiving more money back from their investments than they put in, making it even more clear they had no expectation of earning a profit.

“Subjectively, overwhelming evidence points to the fact that Mr. Feng’s EB-5 investors simply did not care about whether or not they earned a financial ‘profit’ from their EB-5 investment,” the motion said. “Instead, they were exclusively concerned with whether or not their investment would result in their securing permanent residency in the U.S.”

Feng said that if the instruments are not considered securities, he could not have violated the Exchange Act since he was not acting as a broker under it. He also argued that the fees he receives from the regional centers are based on immigration outcomes and don’t relate to the actual EB-5 investments themselves, meaning he could not have committed securities fraud, as the SEC alleges.

“In other words, Mr. Feng’s incentives, as a lawyer, were completely aligned with those of his clients, and there was no reason for Mr. Feng to engage in ‘abusive sales practices’ that might benefit himself to the detriment of his clients,” the motion said.

The motion also noted that attorneys already operate under heightened fiduciary duties and that it “makes little sense, as a matter of public policy” to also subject them to regulations covering brokers.

An attorney for Feng, Andrew B. Holmes of Holmes Taylor & Jones LLP, told Law360 Wednesday that the SEC is stretching a bit.

“Especially in these EB-5 cases where the attorneys are being tried,” he said. “There’s so much regulation already, it just seems like the SEC is providing a solution in search of a problem.”

In late July, U.S. District Judge Consuelo Marshall denied another summary judgment bid from Feng, finding that the agency’s fraud claims are generally pled with “sufficient specificity.” The judge rejected Feng’s argument that the claims against him were “unconstitutionally vague,” and also found that the terms “security” and “broker” could be reasonably construed as applying to Feng’s type of activities.

Representatives for the SEC did not immediately respond to a request for comment Wednesday.

The SEC is represented by its attorneys Donald Searles and Megan M. Bergstrom.

Feng is represented by Andrew B. Holmes and Matthew D. Taylor of Holmes Taylor & Jones LLP.

The case is Securities and Exchange Commission v. Hui Feng et al., case number 2:15-cv-09420, in the U.S. District Court for the Central District of California.