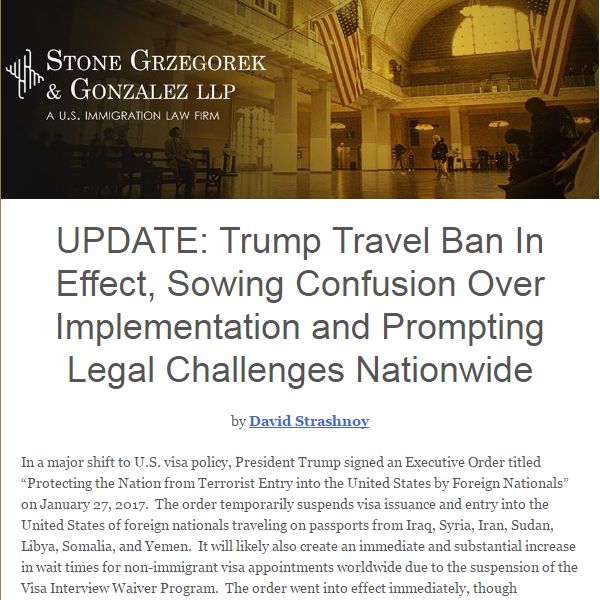 In a major shift to U.S. visa policy, President Trump signed an Executive Order titled “Protecting the Nation from Terrorist Entry into the United States by Foreign Nationals” on January 27, 2017.  The order temporarily suspends visa issuance and entry into the United States of foreign nationals traveling on passports from Iraq, Syria, Iran, Sudan, Libya, Somalia, and Yemen.  It will likely also create an immediate and substantial increase in wait times for non-immigrant visa appointments worldwide due to the suspension of the Visa Interview Waiver Program.  The order went into effect immediately, though implementation has been inconsistent as the administration continues to develop guidance regarding which individuals are affected.  Multiple lawsuits throughout the country have been filed challenging the legality of the executive order.  The situation remains fluid.

Key elements of the Executive Order include:

Although the travel ban is in effect, the situation remains fluid as the Trump administration continues to develop guidance regarding which individuals may be affected.  In response to multiple lawsuits filed by several civil rights organizations immediately following the signing of the executive order, federal courts throughout the country have issued limited stays of certain aspects of the executive order, although it is still unclear whether DHS is complying.  Implementation of the executive order by DHS has been inconsistent due to the high level of uncertainty regarding its applicability. Meanwhile, the Department of State (DOS) has cancelled interviews and halted issuance of all visas to individuals subject to the executive order.

There have been numerous credible reports of Customs and Border Protection (CBP) officers pressuring returning LPRs to abandon their status at ports of entry throughout the country.  Subject to the advice of a qualified immigration attorney, LPRs should not abandon their status nor sign Form I-407 if asked to do so by a CBP officer.

The suspension of the Visa Interview Waiver Program will have a major effect on visa processing as overseas embassies and consulates adjust their staffing and workflows to the new reality. These adjustments will likely result in an immediate and substantial increase in wait times for visa appointments worldwide.  All SGG clients should plan accordingly.

Such a wide-ranging policy shift introducing enhanced vetting procedures will present an immense challenge for implementing agencies such as the DOS, DHS, and the United States Citizenship and Immigration Services.  We have already observed and expect further increased delays, inconsistent decision-making, and adjudication errors as those agencies try to execute President Trump’s directive.

In these uncertain times, we encourage you to contact SGG if you believe you may be adversely affected by these policy changes so that we can develop an effective strategy going forward.  SGG will continue to follow these developments and provide regular updates.