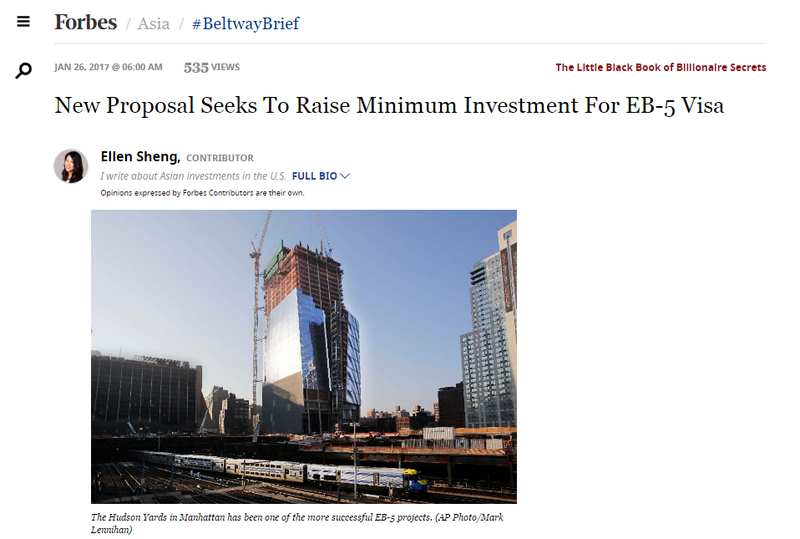 The controversial EB-5 program, which issues green cards to "alien entrepreneurs" who invest in projects that create at least 10 full-time jobs, faces more uncertainty with a new administration at the helm and a recent proposal to introduce some changes.

The proposal also seeks to change how a "targeted employment areas" (or TEA) is determined. The power to define what is a TEA now lies with the states but the Department of Homeland Security suggests taking on that task.

The reception to the proposal has been mixed, with regional centers and developers worried that the hefty increase could dampen demand.

"Everyone expects an increase, they're not opposed to the concept but how do you deal with an 80% increase? Plenty of other countries that have these immigration programs don't have so many strings attached," said Eric Orenstein, an attorney at Rosenberg & Estis, which works with EB-5 regional centers and lenders.

This was just the latest in the number of attempts to reform the EB-5 program.

The program has been criticized for not doing enough to filter out fraud and for straying from its original intent to stimulate job growth in economically-blighted areas. Various agencies have stepped up oversight – the U.S. Citizenship and Immigration Services increased staff and random site visits. It also got rid of regional centers that didn't meet requirements. The SEC has filed fraud charges in several EB-5 cases.

But lawmakers haven't been able to pass any proposals to introduce reform or to increase the minimum investment amount. Part of the difficulty is that the EB-5 is wrapped up in the omnibus spending bill. As a result, proposals have been repeatedly pushed aside and the EB-5 program temporarily extended as lawmakers hope they'll be able to revisit the issue and make a decision at a later date.

Uncertainty hangs over the program

"There's been a specter of reform in the background for so long, it's been tough to have certainty about how the program will function. Will projects that qualify under the current program be grandfathered in? No one knows. Everybody believes there will be some reform but no one knows what it will look like," said Michael Gibson, a partner at Bass, Berry & Sims in Washington, D.C.

It's unclear what will happen in April when the EB-5 program is up for renewal again. With the Trump administration dealing with so many other issues at the moment, it seems likely EB-5 reform will fall by the wayside again.

"The [Trump] administration has a lot on its hands and I don't know where EB-5 falls on its list of priorities but it's an immigration-based program that has significant economic proponent – it's investment and infrastructure in the U.S," said Gibson.

The most popular residency program in the world

Created by Congress in 1990 as a means to stimulate the economy and create jobs, the EB-5 program has become the most popular residency program in the world, in part because it is relatively inexpensive. Comparable programs in Australia, the U.K. or Canada have investment requirements of $1 million to $5 million.

The USCIS estimates that since 2012 at least $8.7 billion has been invested in the U.S. economy and 35,150 jobs created through the EB-5 program. The program issues a maximum of 10,000 green cards a year and 90% of applications come from China.