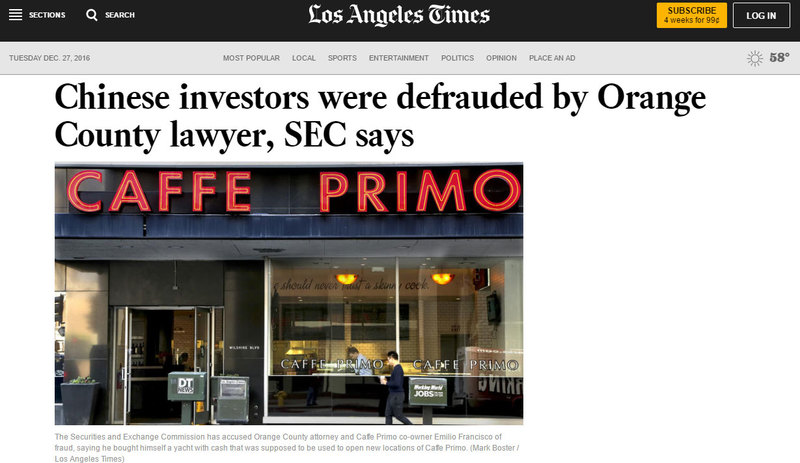 The Securities and Exchange Commission has accused Orange County attorney and Caffe Primo co-owner Emilio Francisco of fraud, saying he bought himself a yacht with cash that was supposed to be used to open new locations of Caffe Primo.

Instead of using Chinese investors’ cash to open coffee shops, assisted living facilities and other businesses, an Orange County attorney spent millions on a yacht and other personal expenses, according to a civil fraud suit filed Tuesday by the Securities and Exchange Commission.

The SEC alleges that Newport Beach lawyer Emilio Francisco misspent at least $9.5 million from 131 investors who wanted to participate in the federal EB-5 visa program, which promises permanent U.S. residency in exchange for investments that create jobs in the U.S.

The program has faced harsh criticism over the last few years as developers stretched rules aimed at ensuring that EB-5 money flows to rural communities or areas with high unemployment. A disproportionate amount of investors’ cash has gone to build pricey condos and hotels in Los Angeles and other cities.

Increasingly, the program has also been seen as a potential haven for fraud. Over the last few years, a number of investment managers have been charged with duping foreign investors and misspending cash that was supposed to go to job-creating projects.

Francisco, through his Costa Mesa firm PDC Capital Group, raised more than $72 million from EB-5 investors, most of them Chinese citizens, between 2013 and September of this year, according to the SEC suit. The agency alleges that Francisco promised that the money would be used to open additional locations of Caffe Primo, a Southern California coffee shop chain he co-owns, and to build assisted-living facilities in California, Florida and Arizona.

None of the assisted living facilities have been built, though some of the Caffe Primo locations associated with EB-5 investors’ cash have opened, according to the suit, filed in federal district court in Los Angeles.

The SEC said Francisco improperly diverted investors’ money to PDC Capital Group instead of to the coffee shops and assisted-living facilities, and used the money to pay for PDC’s operations and his own expenses.

Francisco did not respond to messages left at PDC’s office. His attorney did not return calls for comment.

The SEC wants to ban Francisco and his companies from soliciting EB-5 investments and also wants them to to pay investors back. The agency has also asked the court to freeze Francisco’s assets.

The EB-5 program has been around since 1990 but was little used until 2008, when the number of visas issued through the program started to skyrocket, according to a 2014 report from the Brookings Institution and the Rockefeller Foundation. Amid the financial crisis, EB-5 investors provided cash-strapped developers with a new source of capital, helping to fuel building booms in Los Angeles, New York and other urban centers.

Investors can qualify for U.S. residency if they invest $1 million in a new business venture that creates at least 10 jobs. For businesses in rural or high-unemployment areas, investors can put in just $500,000, though it has become commonplace for EB-5 project developers to link projects even in prosperous urban areas to pockets of high unemployment to qualify for the smaller amount.

As the EB-5 program has grown, so has the potential for fraud. The SEC filed five EB-5 fraud cases last year and a handful more this year. Several cases have ties to Southern California, a hub for investment from China, where the EB-5 program is particularly popular. For the 12 months that ended in September 2015, Chinese citizens accounted for nearly 84% of U.S. visas obtained through the program.

Last year, the SEC sued a Redlands doctor for fraud, saying he and an associate misspent half of the $20 million they raised from Chinese investors hoping for U.S. residency. In June, the agency sued an Orange County couple, saying they misappropriated millions of dollars that were supposed to build a cancer treatment center.

In 2014, the SEC filed civil fraud charges against Los Angeles immigration attorney Justin Moongyu Lee, saying he took EB-5 money that was supposed to build biofuel plants in Texas and instead invested in a mining operation in the Philippines. The Justice Department filed criminal fraud charges, though the case has not moved forward because Lee is serving a prison sentence in South Korea.