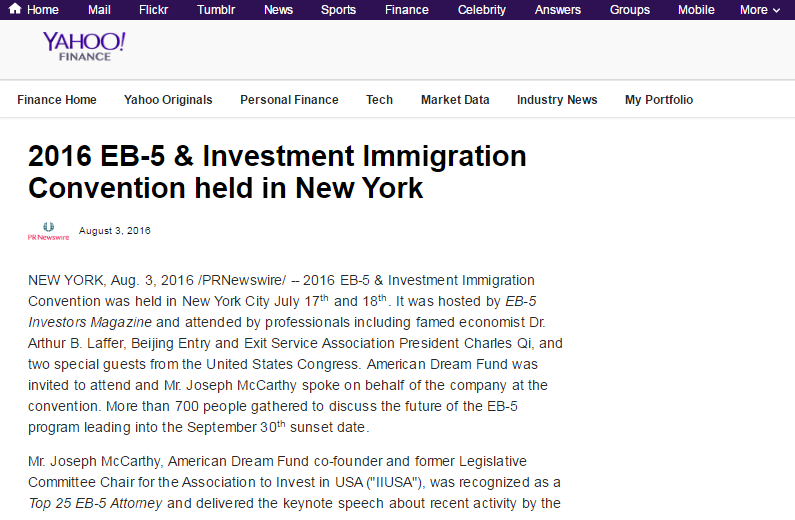 EB-5 & Investment Immigration Convention was held in New York City July 17th and 18th. It was hosted by EB-5 Investors Magazine and attended by professionals including famed economist Dr. Arthur B. Laffer, Beijing Entry and Exit Service Association President Charles Qi, and two special guests from the United States Congress. American Dream Fund was invited to attend and Mr. Joseph McCarthy spoke on behalf of the company at the convention. More than 700 people gathered to discuss the future of the EB-5 program leading into the September 30th sunset date.

Mr. Joseph McCarthy, American Dream Fund co-founder and former Legislative Committee Chair for the Association to Invest in USA ("IIUSA"), was recognized as a Top 25 EB-5 Attorney and delivered the keynote speech about recent activity by the United States Citizenship & Immigration Service ("USCIS") and the United States Senate and House Judiciary Committee. In recent months, USCIS has declared that it will be proposing new policies, memoranda, and possibly new regulations, of its own regardless of whether Congress decides to pursue legislation. As part of USCIS's reforms, they have declared they intend to perform regional center audits, conduct investor I-829 interviews, engage in project site visits, and clarify policies on whether or how investors can receive their capital back prior to their I-829 approval.

Mr. McCarthy emphasized the importance of due diligence, the need for regional centers to prepare for changes to best serve overseas clients, and the continued positive growth of the EB-5 program, as well as increasing protections for EB-5 investors, common RFEs and response strategies.

Mr. McCarthy is a member of the American Immigration Lawyers Association ("AILA") and served for four years as the Legislative Committee Chair for the Association to Invest in USA ("IIUSA"), which is a national trade association of EB-5 Regional Centers. He also serves on the Editorial Board for the EB-5 Investors Magazine and recently authored multiple chapters of the EB-5 Handbook.

The conference provided the industry with insights on the September 30th sunset date and USCIS reforms of legislation, and had the positive impact on increasing protections for EB-5 investors and project due diligence.