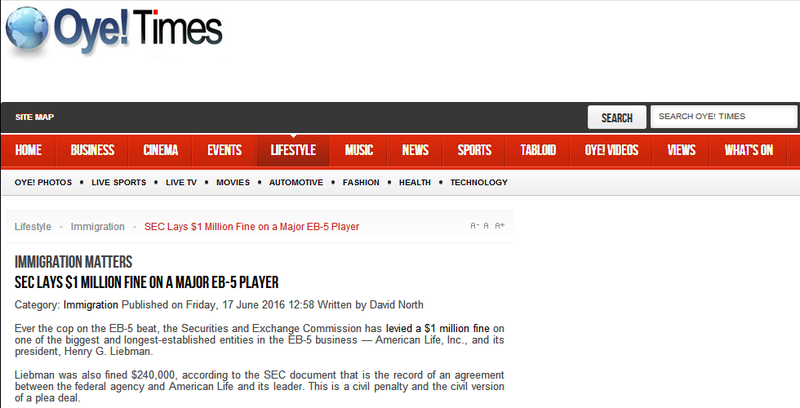 Ever the cop on the EB-5 beat, the Securities and Exchange Commission has levied a $1 million fine on one of the biggest and longest-established entities in the EB-5 business — American Life, Inc., and its president, Henry G. Liebman.

Liebman was also fined $240,000, according to the SEC document that is the record of an agreement between the federal agency and American Life and its leader. This is a civil penalty and the civil version of a plea deal.

It should be stated immediately that while Seattle-based American Life has agreed to a charge of misbehavior, there is no suggestion of investors' moneys being stolen, as so often happens in other EB-5 cases. In this instance, as I understand it, the corporation handled its relationships with its middlemen in such a way as to cause them (mostly immigration lawyers) to violate SEC rules about the registration of broker-dealers. This is how the SEC document reads:

American Life claims to have helped 1,700 investors get green cards. It is a major player in the industry and has not been the subject to any of my CIS blogs over the last half-dozen years.

The first thing one sees about the firm in doing a Google search, however, is unfortunate. It shows a detailed map of Seattle the location of the firm, which is halfway between the railway yards and a place (presumably an advertiser) called "Cannabis City". But then the firm's main business plan is to buy up and refurbish down-at-the-heels industrial sites in cities like Seattle and maybe its offices are located in such a neighborhood.

EB-5 Renewal Speculation. The main part of the EB-5 program sunsets on September 30, unless Congress takes action to renew it. Immigration Daily, a specialized internet news site, speculates that, because there is no strong political interest in either reforming or continuing the program, the status quo will be preserved by yet another line in an appropriation bill, as was done last year, continuing the program as-is until December 15 of this year. Then there will be another patch, which will continue it until March 15 of next year, with no changes.

Let's hope that is not the case, and that at least we get some reform in this corruption-ridden immigration vehicle, if not its demise.