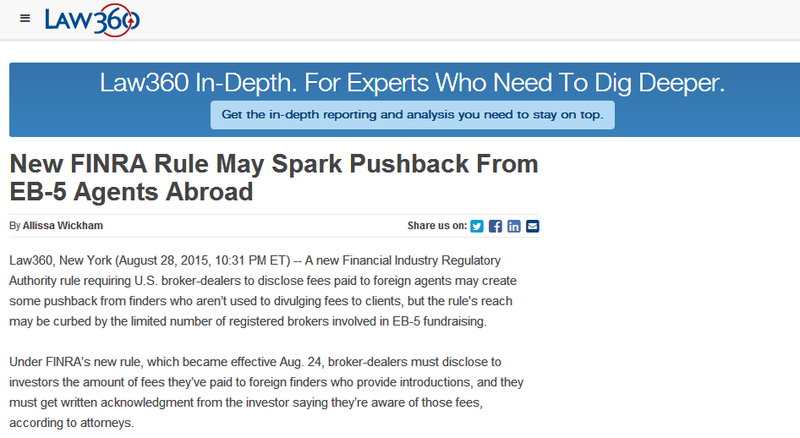 A new Financial Industry Regulatory Authority rule requiring U.S. broker-dealers to disclose fees paid to foreign agents may create some pushback from finders who aren’t used to divulging fees to clients, but the rule's reach may be curbed by the limited number of registered brokers involved in EB-5 fundraising.

Under FINRA’s new rule, which became effective Aug. 24, broker-dealers must disclose to investors the amount of fees they’ve paid to foreign finders who provide introductions, and they must get written acknowledgment from the investor saying they’re aware of those fees, according to attorneys.

Although the rule isn’t exclusive to the EB-5 program, it certainly affects registered brokers who hope to raise capital from EB-5 investors abroad, many of whom hail from China.

Through the EB-5 program, investors can commit as little as $500,000 to a project and eventually come away with a green card, provided a job creation requirement is fulfilled. Regional centers are used to pool investor funds, and roughly 90 percent of EB-5 investments go through them, according to a U.S. Citizenship and Immigration Services spokesman.

Michael Gibson, an investment adviser who conducts analysis on EB-5 projects, said that regional center representatives will often travel to China to meet with foreign agents, who will then present the project to their clients for a fee. However, foreign agents are very resistant to having clients know how much they’re being paid in fees, which means the new rule has the potential to strain relationships between regional centers and agents, according to Gibson.

“I will guarantee you, 100 percent of the agents in China never, ever, ever disclose their compensation agreement with the regional center to their clients,” he said, estimating that some fee agreements could run as high as $140,000.

The new FINRA rule presents another area for concern, as it stipulates that a foreign agent who does more than make an introduction must be a registered representative, according to Seyfarth Shaw LLP's Gregory White.

“Once a finder does more than make an introduction and receives so-called transaction-based compensation — i.e., a percentage of the deal — there's an issue as to whether they have a problem with the SEC,” White said.

But as for the disclosure requirements, the rule may not pose a huge roadblock yet, since most of the fundraising in China doesn’t go through broker-dealers, according to Ronald Fieldstone of Arnstein & Lehr LLP. For instance, most regional centers aren’t performing their activities as FINRA broker-dealers, he said.

“I don't know how significant [the rule] is from a practical point of view, only because most of the money being raised is not through FINRA-licensed broker-dealers,” Fieldstone argued.

Angelo Paparelli, a Seyfarth Shaw attorney who heads up the firm’s EB-5 team with White, agreed that the rule wouldn't have a huge, immediate impact on the EB-5 marketplace.

“[T]he rule only applies to registered broker-dealers, and unfortunately, they have not made a substantial inroad into EB-5 transactions,” Paparelli said.

However, the absence of broker-dealers may slowly be changing, attorneys said. Some of the larger regional centers have said they’re seeking broker-dealer registrations, according to Paparelli. And federal agencies such as the U.S. Securities and Exchange Commission have hinted that registration may be wise, White said.

“The SEC and FINRA have said to people that they should consider it, which certainly means that it's something that could be an issue for regional centers,” White said.

But Saliba added that some of the larger, hypersuccessful regional centers are still functioning under the notion that they can operate as unlicensed brokers. He said he knows of one major regional center that takes the position that its EB-5 offerings are not securities, while another says it's operating within the appropriate guidelines because it's only working with foreign brokers.

Indeed, the role of broker-dealers in the EB-5 space still seems to be in flux, as a USCIS spokesman told Law360 that whether someone is a broker-dealer has “no bearing” on his or her eligibility to participate in the EB-5 regional center program.

But according to a 2013 alert from Morrison & Foerster LLP, SEC staff said during a stakeholder conference call that whether a regional center is required to register as a broker-dealer depends on whether “potential investors are solicited,” among other securities issues.

An SEC spokeswoman declined to comment on the agency’s official position regarding whether regional centers should register as broker-dealers, but the agency certainly has been turning up the heat on violations in the EB-5 arena lately, including when it brought its first charges against brokers who handled EB-5 investments.