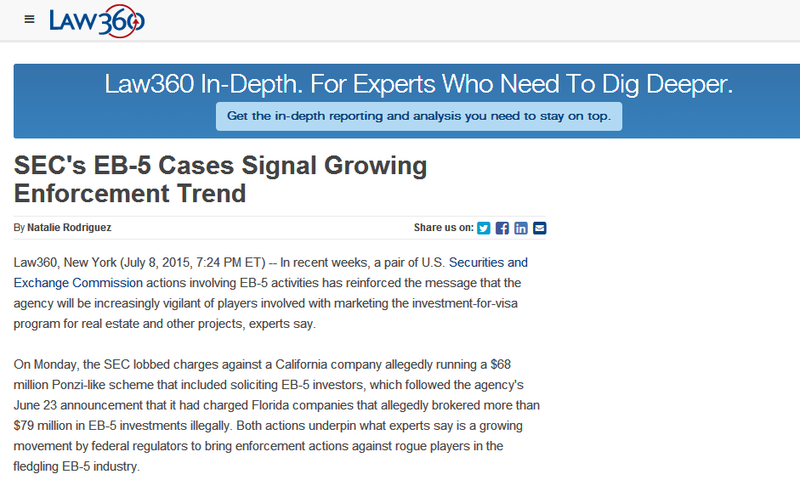 In recent weeks, a pair of U.S. Securities and Exchange Commission actions involving EB-5 activities has reinforced the message that the agency will be increasingly vigilant of players involved with marketing the investment-for-visa program for real estate and other projects, experts say.

On Monday, the SEC lobbed charges against a California company allegedly running a $68 million Ponzi-like scheme that included soliciting EB-5 investors, which followed the agency's June 23 announcement that it had charged Florida companies that allegedly brokered more than $79 million in EB-5 investments illegally. Both actions underpin what experts say is a growing movement by federal regulators to bring enforcement actions against rogue players in the fledgling EB-5 industry.

The more recent action was taken against oil and gas company Luca International Group and its CEO Bingqing Yang, who the SEC contends made presentations to Chinese-American investors that wrongfully played up Luca as a successful enterprise, even as it was falling into debt and earning no profits.

Meanwhile, the first action hit Ireeco LLC and its Hong Kong-based, but U.S. operating, successor Ireeco Ltd. with charges over allegedly acting as an unregistered broker-dealer for EB-5 investors. The charges, which were settled in a deal where Ireeco made no admittance or denial about the SEC's findings, marked the first SEC action against brokers handling EB-5 investments.

“It's the first one of several that we are expecting to see,” Catherine DeBono Holmes, chair of Jeffer Mangels Butler & Mitchell LLP’s investment capital law group, said of the Ireeco settlement.

Holmes noted that the Ireeco cases indicate that the SEC is open to seeking settlement orders from U.S. persons who have received finder's fees — or payments for referring investors to certain EB-5 regional centers — going back several years, perhaps even before industry players may have known that it would violate U.S. securities laws.

Many attorneys in the industry point to a 2013 fraud case that the SEC brought against companies alleged to be putting together financing for a Chicago-area hotel and conference center as a turning point for the agency's involvement in the EB-5 industry.

“Before that time, a lot of people really didn't know that the EB-5 investments were considered securities under U.S. laws,” Holmes noted. “After that time period, you saw most U.S. people stopped taking those finder's fees.”

But the SEC order on the Ireeco case says that from at least January 2010 to May 2012, Ireeco LLC operated out of a Florida base as an unregistered broker-dealer, and that from May 2012 to the present, the Hong Kong-based successor has done the same.

At least 10 of the 158 foreign investors that were solicited, for which the Ireeco entities allegedly received fees, were potential investors already residing in the U.S., the SEC contended. That allegation would be a clear violation of securities laws, though Holmes said the Hong Kong Ireeco entity may have run afoul of the agency either way for maintaining its U.S. base while being unregistered.

“I believe they could say that even if all of your investors are outside the U.S., if you as a finder are doing business in the U.S., you're still subject to U.S. jurisdiction and have to be registered as a broker-dealer,” Holmes said.

But the first incarnation of Ireeco was operating at a time when it was common practice to pay finder's fees. While it's arguably an unfair use of the SEC's enforcement power to include charges from this time period, it is also a reaffirmation of the agency's intention to actively target EB-5 fraudsters or abusers, Holmes noted.

A representative for the SEC declined to comment for this story, but pointed Law360 to a 2013 investor alert it put out to warn individual investors about scams that might exploit the EB-5 program.

Over the last two years, other agencies have also been ramping up their vigilance and enforcement of EB-5-related violations, experts have noted.

“You have other agencies of the government that are more actively enforcing the various issues involving the EB-5 program, and that includes the SEC and other agencies,” Ronald Fieldstone, a partner with Arnstein & Lehr LLP, told Law360 in early June, before the actions took place.

And the agencies are focused on coordinated efforts. For example, the SEC filed fraud charges against Luca and its CEO in San Francisco following an investigation that saw assistance from a number of other regulators, including U.S. Citizenship and Immigration Services, the Financial Industry Regulatory Authority, the Hong Kong Securities and Futures Commission, and the China Securities Regulatory Commission.

In general, the industry has come into line and has polished up its practices in response to the increasing scrutiny, experts note.

“I think as you've seen the EB-5 community grow, you've seen a level of sophistication in the market that has really had an eye towards compliance," Cohen said. "They take this compliance and these securities laws seriously."

And with even more oversight standards likely to be part of the expected upcoming renewal of legislation authorizing the EB-5 program, experts say that the industry is largely open to more guidance from the SEC.

“In any instance where you have an interagency regulatory overlap, it's always helpful to have more specificity and more guidance," Cohen said. "Attorneys are risk-averse people. We like to know where the bright line is. ... More guidance from the SEC can only be helpful."

But some expect that guidance may likely come out through further enforcement actions.

“I think the SEC has a hard time coming out with proscriptive guidelines,” Holmes said, noting the delays that the agency has had with forming and adopting certain JOBS Act-required rules. “It's easier to take these enforcement methods and use them as a message.”