EB-5 Reform: What To Expect After SEC Jay Peak Enforcement 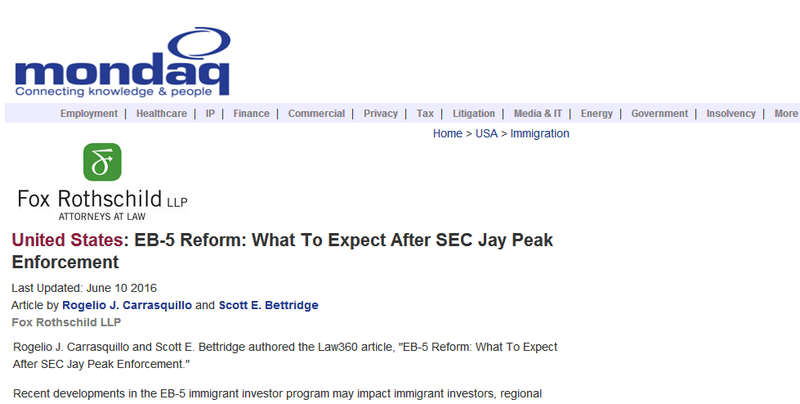 One of the most successful immigration programs in our nation's history, the EB-5 program was created by Congress to stimulate the national economy by creating jobs for Americans via investment by foreign citizens. According to Invest in the USA (IIUSA), the EB-5 trade association, since 2008 the EB-5 program has contributed over $13 billion to the U.S. economy and has created thousands of jobs for Americans in the process.

What is the EB-5 Immigrant Investor Program?

The EB-5 program allows a foreign person — and qualifying immediate family members — to obtain permanent resident status in the U.S. by making an investment in a new commercial enterprise in the U.S. which creates or saves no less than 10 full-time U.S. jobs. The minimum investment required is $1 million, or can be reduced to $500,000 if the investment is in a rural area or targeted employment area (TEA), which is a designated geographic area with high unemployment (at 150 percent of the national average). EB-5 petitions are adjudicated by the United States Citizenship and Immigration Services (USCIS).

Regional Center Portion of the Program Set to Expire

USCIS designates qualified applicants (public or privately sponsored) as regional centers as entities that essentially accept EB-5 investments from foreign investors to generate job-creating economic development ventures within their geographic jurisdiction. One of the main advantages of an investor utilizing a regional center is the entity's ability to count both the direct and indirect jobs produced by the job-creating activity toward the EB-5 program's minimum job requirement.

Until recently, relevant changes or revisions to the EB-5 program were not expected given that 2016 is an election year and that Congress historically defers any significant decisions until after election season ends. Nonetheless, recent developments in the EB-5 industry have increased the possibility of the implementation of material changes to the EB-5 program prior to its expiration in Sept. 30, 2016.

Recent Enforcement Actions By the SEC

In April 2016, the U.S. Securities and Exchange Commission filed an enforcement action against the well-known Jay Peak ski resort in Vermont and its developers. The SEC complaint alleges fraudulent use of funds raised through the EB-5 program in a Ponzi-like scheme. This enforcement action occurred amidst an uptick in the SEC's focus on securing compliance with the federal securities laws, especially scrutinizing developers raising funds through the EB-5 program.

Jay Peak underscores the need for reform to the EB-5 program. We believe that this action will be the catalyst to ensure that integrity and oversight measures are implemented prior to the expiration of the regional center portion of the EB-5 program this September. For example, USCIS has been soliciting input of different stakeholders within the EB-5 industry while working on revising EB-5 regulations. These collective efforts and increased governmental focus on the EB-5 program allow us to anticipate continued reforms likely to occur on the coming months.

Some of the reforms that we should expect from any congressional revision to the EB-5 program are expected to include the following:

1. Increase in the amount of investment: The different pieces of legislation circulated last year contemplated an increase in the amount of required investment. Proposed legislation increases the minimum amount from $500,000 to $800,000 in TEA-designated areas and moreover increases from $1 million to $1.2 million in non-TEA-designated areas (although the final draft legislation ultimately left the $1 million amount unchanged).

The minimum investment amount has remained unchanged since the EB-5 program's creation in 1990 and industry consensus agrees that an increase in the amount of investment is appropriate, provided that such increase allows for a transition in the market allowing for the marketability of new projects at the increased investment level and the protection of existing projects. Failure to include an orderly transition to the new amounts would make it virtually impossible for new projects to raise capital.

2. Revision of TEA Designations: We also expect some sort of revision to the way in which a TEA is determined and what entity is responsible in determining a TEA. Currently there is no uniformity in TEA designations — that is, states and municipalities can designate a TEA based on their internal policies and regulations. It is important that any revision to the way a TEA is determined takes into account the different demographics of the U.S. and takes into account communing labor forces such as those in New York City.

3. Oversight and Integrity Measures: We should also expect integrity measures both at the legislative, as well as the procedural levels. These may include not only increased oversight by USCIS of investors under the EB-5 program, but also at the measures taken by the issuers, regional centers and the attorneys involved in the offering process and during the development of the project. For example, the proposed Visa Integrity and Security Act of 2016 under consideration by the U.S. House of Representatives would impose stricter background checks on investors.

The recent developments related to the claims against Jay Peak, highlight the need for increased oversight during and after the securities offering process. There is a general consensus in the industry that most of these integrity measures will be implemented through legislative reform or voluntarily by stakeholders. The following are some best practices for developers, regional centers, and immigration, corporate or securities counsel involved in EB-5 transactions.

1. Active Oversight of Use of Funds: There should be an active oversight and management of EB-5 funds being invested, including periodic reports to investors of the use of funds and progress of the project. In the event that related parties are involved, a third-party manager should be recommended to perform this task to provide a higher level of comfort to investors that funds are being used properly and that they are aware of how their investment is being utilized.

2. Due Diligence and Underwriting: When evaluating a project, any regional center should perform an underwriting process similar to a non-EB-5 financed project, ensuring the financial viability of the proposed project. This may be performed by a nonrelated party to the regional center or the individual investor. It is important to develop strategies that that are specifically tailored to the nature of the project and offering components. These deals are unpredictable, high-risk transactions, and require a level of due diligence at each step of the process, from the outset at the development of the business plan to documenting job creation at the I-829 stage.

3. The Team: Ensure that your team includes subject matter experts in all phases of the process, not only just with experienced securities, corporate or immigration lawyers and business plan writers, but also with seasoned professionals who will properly translate marketing materials accurately in foreign languages.

4. Increased Interaction with Investors: Offer ongoing or at least quarterly interactions with investors regarding the progress and development of the project. Notify investors of any issues related to the project such as not enough jobs being generated; problems in the process, such as I-526 denials; or updates to the development such as any material changes in the construction schedule or the development of the project. Treat these interactions from an investor's point of view — think about what they would want to know, based on what you would want to know in a similar situation.

5. Avoid Conflicts of Interest: Immigration attorneys should avoid conflicts of interest and be able to understand the hazards of dual representation of both investors and projects in the same transaction. It is recommended not to represent both the projects and the investors in the same deal, unless applicable waivers are in place. Immigration attorneys should also understand the complexities of SEC regulations as they relate to the payment of referral fees and developers shall seriously consider the involvement of a registered broker/dealer in the capital raise. Any missteps can lead to malpractice claims or civil or criminal violations.

6. Offering Documents Disclosure: Ensure that all material facts related to the projects and any risks associated to the particular project are outlined in the offering documents, that they are true, and that they are not presented to investors in an ambiguous or deceptive way.

7. Investors' Due Diligence: Investors should be encouraged to perform due diligence on projects prior to investment to ensure that they understand the project in which they are investing. With the large number of projects available in the market it can be a confusing landscape as to which project may be a better investment. Looking at the full elements of a project and its financial feasibility become more relevant in the recent EB-5 landscape. This due diligence process should be both a continuous and rigorous process which should go beyond just investigation of a regional center and its members. The measures conducted should aim to not only ensure regulatory compliance, but to identify and raise any red flag about the accuracy of the financial documents presented, as well as the business plan, in order to avoid any subsequent disputes or litigation.

For more than two decades the EB-5 program has been a great generator of jobs and economic development in the U.S. by relying on foreign capital at no cost to taxpayers. As the EB-5 market continues to evolve and mature, the need for continuous reform becomes more relevant. With the recent developments, such as Jay Peak's enforcement action, we should expect Congress to finally provide some of the reforms that have been widely accepted by the EB-5 industry.

It is difficult to predict, but 2016 being an election year it is quite possible that reform to the EB-5 program would be minimal and that another short-term extension is granted, passing the ball to the next Congress and administration. During that time, it is important that all stakeholders in the EB-5 industry implement some of the processes and practices discussed in this article. This would potentially help the market mature and would continue to strengthen the EB-5 program as a catalyst for job creation and economic development.