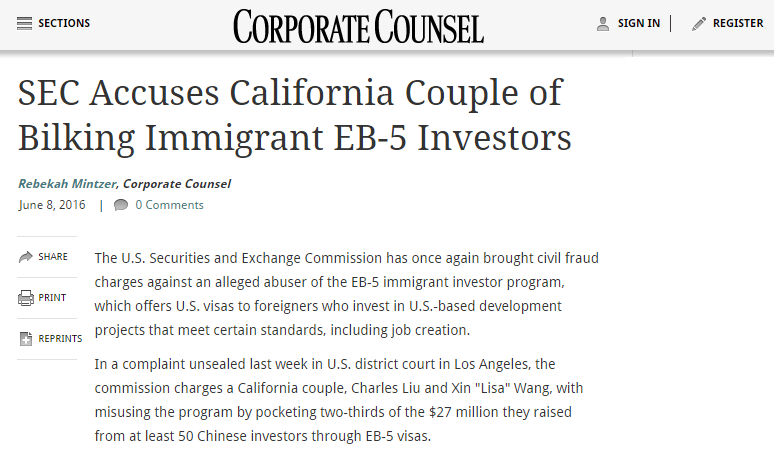 The U.S. Securities and Exchange Commission has once again brought civil fraud charges against an alleged abuser of the EB-5 immigrant investor program, which offers U.S. visas to foreigners who invest in U.S.-based development projects that meet certain standards, including job creation.

In a complaint unsealed last week in U.S. district court in Los Angeles, the commission charges a California couple, Charles Liu and Xin "Lisa" Wang, with misusing the program by pocketing two-thirds of the $27 million they raised from at least 50 Chinese investors through EB-5 visas.

They solicited investment ostensibly to develop and operate a cancer treatment center in California, but the project, which was supposed to provide over 4,500 new jobs, had not yet begun construction, according the complaint. And much of investors' money has allegedly gone to either Liu and Wang's personal bank accounts, or to Chinese marketing firms.

Leora Freire, a shareholder at law firm Richman Greer who works on litigation involving EB-5, says that bad actors who try to defraud investors are an unfortunate fact. "It's a continuing problem, and it's nice to see that the SEC is actually out there enforcing the law where they can do it," she says.

Over the past few years, the commission has made a name for itself in the EB-5 fraud realm by pursuing a number of cases, most recently a major action against developers of a Vermont ski resort.
The proliferation of fraud enforcement actions in the immigrant investor program raises questions about whether the EB-5 program needs to be regulated better—or just differently— in order to lower fraud risk and promote fairness.

An August 2015 U.S. Government Accountability Office review of the program noted that the U.S. Citizenship and Immigration Services, which administers the EB-5 program, was lacking in its collection and analysis of data connected to program participants, including data that might help spot fraud risks. Members of Congress have also called for better background checks on project developers, more funds to allow audits and site visits for EB-5 projects, and increased disclosure requirements to protect investors.

Audrey Singer, a senior fellow in the Metropolitan Housing and Communities Policy Center at the Urban Institute, a Washington, D.C., think tank, says that it's "odd" that an agency like USCIS, which focuses traditionally on immigration and visa administration, is in charge of a program that requires expertise in a lot of other areas.

She says that the situation "sets up a lot of opportunity to take advantage," because without the business, economic and fraud detection expertise that other agencies have, USCIS may allow projects in places where they don't belong under the law—such as areas without genuinely high unemployment rates. It may also fail to spot and stop fraudulent projects.