Bill Would Tighten EB-5 Visa Controls, Could Add to Backlog 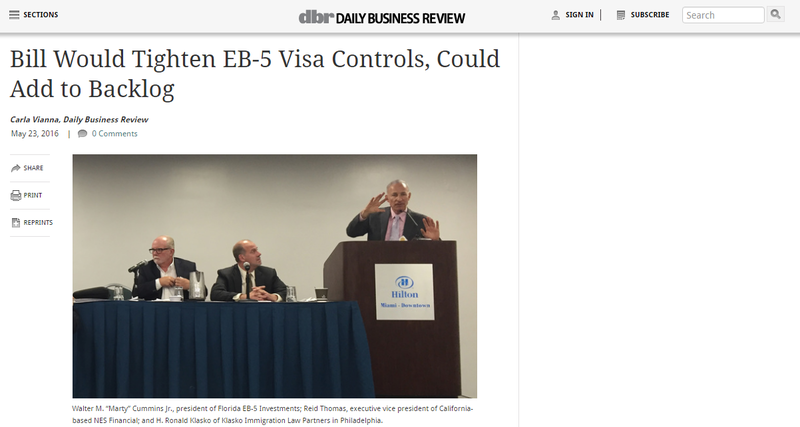 The EB-5 cash-for-visa program may be facing drastic changes, which supporters fear could turn away would-be investors and further delay a backlog of Chinese applications.

A five-member panel addressed the program's legislative hurdles Friday during an EB-5 seminar hosted by Arnstein & Lehr in Miami.

Foreigners can earn a green card by investing $500,000 to $1 million in a job-creating U.S. development, most of which is done through EB-5 regional centers.

A bill introduced in the U.S. House would tighten regional center reporting requirements, job-creation standards and use of foreign capital.

The EB-5 Integrity Act of 2016 also would require regional centers to consult the Department of Homeland Security before making administrative changes and retains the department's right to revoke approval for developments at risk for fraud.

"We sure as heck know what the vast majority of these kinds of integrity measures are," he said. "As an industry we should be mature enough … to just implement these things. It's not rocket science."

Last year's failed attempt at reforming the EB-5 law won it an extension to Sept. 30. Since it's a presidential election year, immigration attorney H. Ronald Klasko initially expected a similar story line this year. But in light of the fraud alleged by the Securities and Exchange Commission in the Jay Peak EB-5 development in Vermont, he's not so sure.

"There's real pressure now to do something at least on the integrity side of things to deal with the Jay Peak problem," said Klasko, a founding partner at Klasko Immigration Law Partners in Philadelphia.

He said another issue topping the industry's list of priorities is the growing backlog of applications from China. The U.S. caps the number of EB-5 visas at 10,000 a year, yet the program received over 17,000 applications last year, according to the Citizenship and Immigration Services.

There were nearly 22,000 investor applications pending at year-end, which extended the waiting period to at least five years for most investors.

Klasko pointed out immigration is not the "best issue to get elected on." At its core, the EB-5 phenomenon is "an immigration problem," he said.

Chinese investors, who have secured 80 percent of the EB-5 visas, are facing up to eight-year processing periods based on the current backlog.

A panel of EB-5 experts discusses the legislative hurdles faced by the cash-for-visa program amid heightened federal scrutiny.