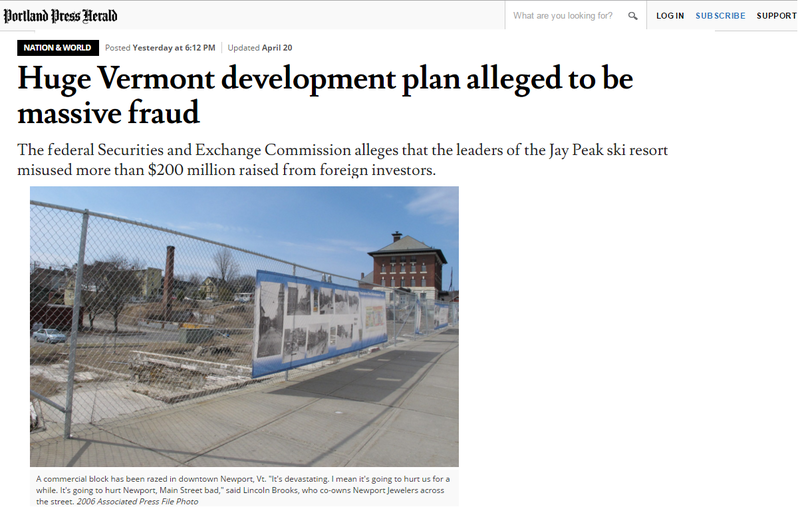 Their plans for a biomedical research plant, a hotel, an airport runway extension and big upgrades at two ski areas brought the promise of jobs to a remote area of northern Vermont that has some of the highest unemployment rates in the state.

Now, the two businessmen behind the sweeping developments stand accused of misusing more than $200 million of about $400 million raised from foreign investors “in Ponzi-like fashion.” The case has brought some of the development to a halt and left state officials who enthusiastically promoted the projects feeling betrayed.

Last week, the federal Securities and Exchange Commission and the state accused Ariel Quiros of Miami, the owner of Jay Peak ski resort, and Bill Stenger of Newport, the resort’s president, of a “massive eight-year fraudulent scheme.” The court filings allege the pair misused money raised through the EB-5 visa program, which encourages foreigners to invest in U.S. projects that create jobs in exchange for a chance to earn permanent U.S. residency.

“Quiros orchestrated and Stenger facilitated an intricate web of transfers … to disguise the fact that the majority of the seven projects were either over budget or experiencing shortfalls,” the SEC said in its complaint. “These shortfalls were due in large part to Quiros pilfering tens of millions of dollars of investor money for his own use,” including to buy Jay Peak and Burke Mountain ski resorts, purchase a Trump Place luxury condo in New York and pay income taxes.

The investors have not been identified and are not accused of wrongdoing. The allegations against Stenger and Quiros are in the form of civil lawsuits, but criminal charges are possible, state Attorney General William Sorrell said.

Stenger and Quiros did not return phone calls seeking comment.

Quiros filed court papers in Miami on Tuesday asking to have all or some of his assets unfrozen, saying the SEC’s order to freeze them is overbearing and deprives him of any ability to feed his family or pay his legal bills. Quiros’ lawyer said in the filing that the SEC’s case is premised on an incorrect argument that Quiros and his affiliates were only entitled to receive a limited amount of investor funds.

Stenger told the Burlington Free Press that he was unaware of the fraud case early last week.

“There was a lot of stuff in the presentation that I got on Wednesday that I was not aware of,” Stenger told the newspaper. “I can’t go any further than that. I’ve got to let it go at that. I’m trying to figure this out as well. I just need to deal with it.”

The governor acknowledged that the biotech facility, planned for Newport with the promise of 450 jobs, and the proposed Renaissance Block, with office, retail and hotel space, were unlikely to happen. Much of the development planned at the resorts has already been built, and the Caledonian Record newspaper reported that most work on the runway at Northeast Kingdom International Airport was done last year.

A commercial block in Newport, at about 4,500 residents the most populous community in Orleans County, has already been demolished to make way for the Renaissance project. Lincoln Brooks, co-owner of Newport Jewelers, across the street from what is now an empty block of rubble, said his wife calls it “little Beirut.”

“It’s devastating. I mean it’s going to hurt us for a while. It’s going to hurt Newport, Main Street bad,” said Brooks, who said he knows Stenger very well and believes he has been exploited.

Steve Breault, owner of the Newport Natural Market and Cafe mext door, said some of the development didn’t make sense for such a small city near the Canadian border.

“You would think a bio company would want to be near other technology companies where there’s a bigger pool for talent,” he said.

“Obviously this was quite a bombshell to all the staff here,” said Jessica Sechler, marketing manager for Q Burke, where the nnew hotel and conference center hasn’t opened yet.

Susan Schurger, a cashier in the Jay Peak cafeteria, said she’s not worried.

“I believe in Jay. The people are the same. The mountain’s the same. It’s obviously a big bump in the road, but I’m sure that it’s going to be resolved,” she said.

The case is one of several around the country in which the EB-5 program was allegedly used to defraud hundreds of investors out of tens of millions of dollars.

Vermont officials have long backed the EB-5 projects, with Shumlin, a Democrat, and his Republican predecessor, Jim Douglas, traveling to Asia to promote them. Quiros and Stenger also have contributed thousands of campaign dollars to Vermont politicians in recent years, according to the Burlington Free Press.

“The dream that we could finally create hundreds and hundreds of jobs in a part of the state that has been struggling for jobs is something any reasonable person would look to pursue,” Shumlin said last week.

Shumlin said he changed the structure of the state’s regional EB-5 office so that it would have more oversight, which helped investigate the allegations.

“I think it’s a testament to the fact that campaign contributions don’t make a difference,” he said.

Shumlin noted that Vermont has benefited from the some of the projects already completed.

“Jay Peak is a booming business right now, with a water park, with an improved mountain, an improved golf course, improved accommodations,” he said. “That’s not an asset that’s just going to dry up and go away.”