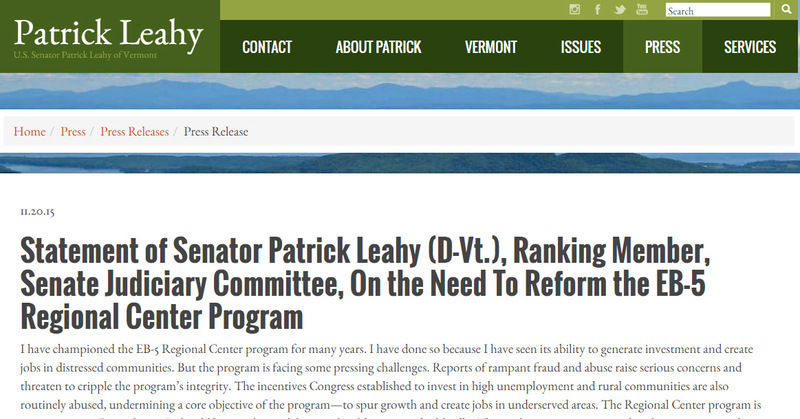 I have championed the EB-5 Regional Center program for many years. I have done so because I have seen its ability to generate investment and create jobs in distressed communities. But the program is facing some pressing challenges. Reports of rampant fraud and abuse raise serious concerns and threaten to cripple the program’s integrity. The incentives Congress established to invest in high unemployment and rural communities are also routinely abused, undermining a core objective of the program—to spur growth and create jobs in underserved areas. The Regional Center program is set to expire on December 11. It should be reauthorized, but we should not extend it blindly. There is bipartisan consensus that the program is in dire need of reform, and we cannot squander this opportunity.

I have long sought reforms to the Regional Center program. Last Congress, my EB-5 amendment to Comprehensive Immigration Reform provided the Department of Homeland Security additional authority to revoke suspect regional center designations or immigrant petitions. It also provided for increased reporting, background checks, and securities oversight. My amendment was unanimously approved in the Judiciary Committee, but unfortunately the improvements it contained have all had to wait, as the House of Representatives failed to allow a vote on the bipartisan immigration reform bill that passed the Senate last Congress.

In the past year, only more concerns have emerged. In January, I joined Senators Grassley, Corker, Johnson, and others in requesting that the Government Accountability Office (GAO) audit the EB-5 program. The GAO report, released in August, detailed fraud vulnerabilities within the program and questioned its economic impact. Separate reports from the Department of Homeland Security’s Office of Intelligence and Analysis and Office of the Inspector General highlighted additional issues that need to be addressed.

I am also troubled by the fact that the incentives Congress created to promote EB-5 investment in rural and high unemployment areas have been rendered meaningless. Investors are provided a discount if they choose to invest in rural or high unemployment areas, known as targeted employment areas or TEAs. At present, however, the most affluent neighborhoods in the country routinely qualify as TEAs by selectively stitching together otherwise unrelated census tracts. Department of Homeland Security Secretary Johnson rightly described this practice as gerrymandering. I do not suggest that affluent areas should not benefit from EB-5. They should. But they should not qualify for incentives intended to benefit high unemployment and rural areas. These areas typically do not have access to significant capital and often struggle to create jobs.

Secretary Johnson himself called for significant reforms to strengthen the Regional Center program. In a letter to the Judiciary Committee last April, he asked for authority to quickly act on criminal and national security concerns, additional protections for investors, enhanced reporting and auditing, improved integrity of TEAs, increased minimum investment amounts, and more.

I have now worked for over two years to develop legislation that would provide a necessary overhaul of the Regional Center program. In June, I was joined by Chairman Grassley in introducing this reform-oriented legislation, S.1501. Since then, Chairman Grassley and I have worked with House Judiciary Chairman Goodlatte on a bicameral bill based on S.1501.

This bicameral bill would provide the Department with the authorities and investigative tools necessary to address national security concerns and fraud. The reforms include further expanding background checks, conducting a more thorough vetting of immigrant investors and proposed investments, and providing for the ability to proactively investigate fraud, both in the United States and abroad, using a dedicated fund paid for by certain program participants. The bill would provide greater protections for investors and clarity and shorter processing times for project developers.  It would also raise minimum investment thresholds so more money goes to the communities that need it. And it would help to restore the program to its original intent, by ensuring that incentives to invest in distressed and undercapitalized areas are restored.

Such reforms would answer the concerns raised by Secretary Johnson, the Department’s Inspector General, the GAO, and others, instilling both confidence and transparency in the program. I believe these reforms would result in a secure EB-5 program that creates American jobs and promotes economic growth throughout our country. We cannot continue to leave the Department ill-equipped to administer this job creation program. We know what is needed to fix it. And we should fix it now.