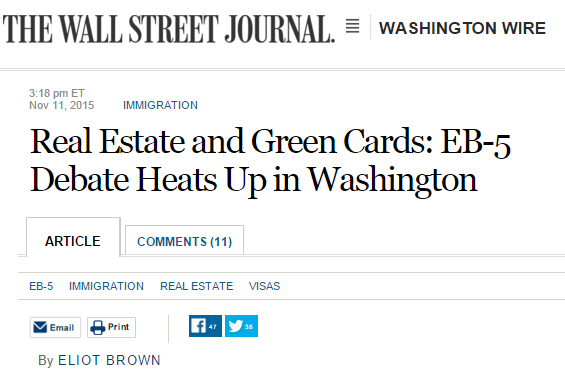 Congressional debate is heating up on the EB-5 immigration program, which allows foreigners who invest in job-creating projects to get green cards.

In recent days, real estate industry executives received copies of draft legislation on a renewal of a key piece of the program, a key piece of which expires on Dec 11. The draft – supported by Sens. Charles Grassley and Patrick Leahy, would tack another four years onto the program, which grants 10,000 visas a year to immigrant investors and their families.

The draft contains language meant address many of the concerns over fraud and lax management that have been raised by many about the program – provisions likely to be widely supported.

But the draft legislation also takes aim at the scores of developers of high-end real estate projects that have flooded into the program in recent years —an issue that has become the main sticking point in reforming EB-5 and is unlikely to go down without a fight.

The EB-5 program as created in 1990 to give green cards to investors who put in at least $1 million into business that create at least 10 jobs per investor. To aid rural and high-unemployment areas—viewed at the time as a way to steer investment to communities most in need of the investment—Congress created a special category that allows a $500,000 minimum.

One of the special districts drawn for the EB-5 program. 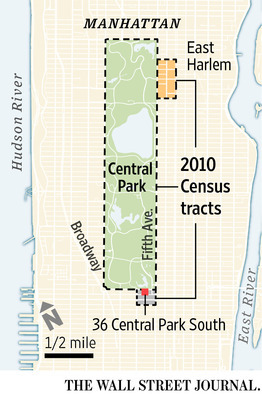 In recent years developers –largely in New York and other major cities—have dominated the program, qualifying as high-unemployment areas despite most of their projects being luxury towers in valuable neighborhoods.

The projects are able to qualify by creating special districts known as “targeted employment areas” that—with the blessing of state officials—connect the high-end developments with housing projects or other census tracts with high unemployment. While the practice has gone on for years, those seeking EB-5 for in rural and poorer areas say they are now being crowded out by the flashy projects because the program is now at capacity.

The draft this week is the latest attempt to address this issue, which critics and the Obama administration have called an abuse, but developers have said creates jobs that might not otherwise be created.

Here’s some of the highlights of the draft, which would be less restrictive than an earlier bill by the two senators.

1. In order to qualify for the benefits of a high unemployment area, a project would need to be in or adjacent to a census tract with 150% of the national unemployment rate. This would be a change from the current rules that don’t specify the size of the area.

2. The draft legislation would also allow projects in census tracts with a poverty rate of at least 20% to qualify-moving the program closer in line with another federal economic development program.

3. Manufacturing and government infrastructure projects would have their own categories, qualifying for the lower fundraising level, as would businesses in certain federally designated economic development zones.

5. Four thousand of the 10,000 EB-5 visas would be set aside only for projects that qualify at the lower level, up from the 3,000 in the legislation today. (In practice, nearly all the 10,000 visas today are for the lower fundraising level because the bulk of the country can qualify as a “targeted employment area”).

Just what becomes of the text is unclear.

While many leading executives in the EB-5 world have backed a compromise on the Targeted Employment Area issue, the draft legislation would be more restrictive. Other developers and their allies have insisted on policies that allow major cities to qualify for the same benefits as rural areas, saying many jobs are created outside prosperous neighborhoods.