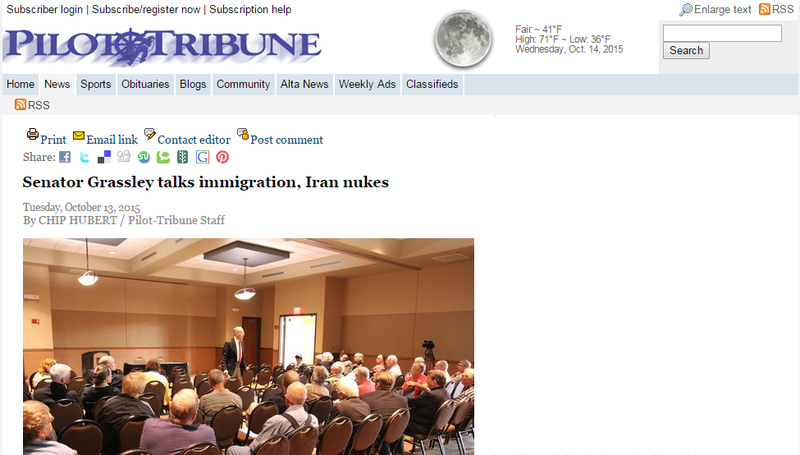 U.S. Senator Chuck Grassley fielded questions from area residents from 7:30 until about 8:30 Monday morning at the King's Pointe conference center. Immigration and the Iran Nuclear Agreement dominated the discussion.

First, Grassley said "Thank you all for coming out. In a representative government, communication is essential, and I always try to encourage it."

When asked about sanctuary cities- cities or areas that do not prosecute illegal immigrants- Grassley said such areas are unlawful and all immigration laws should be upheld throughout the country. He has introduced legislation that would identify sanctuary cities and withhold federal funding from these cities. Also, to prevent the ACLU from suing law enforcement agencies in sanctuary cities by establishing their legal right to assist federal authorities in upholding immigration laws. The legislation would also make a mandatory 5 year prison sentence for illegal immigrants who re-enter the U.S. after being convicted of a violent crime, or two previous illegal entries. This last measure is called Kate's law after Kate Steinle, who was allegedly murdered by an illegal immigrant in July.

A related questioner said "When will we get an honest Department of Justice?" Grassley said previous presidents didn't enforce certain laws, a process called 'prosecutorial discretion,' but they were discreet. "This administration openly encourages illegal immigration. You shouldn't let your enemies know what you're doing."

On the other side of the issue, a person said, "How old are the immigration laws currently on the books, and is it time for Congress to take a second look at them?"

Senator Grassley replied the four major current laws were enacted in 1890, 1920, 1960 and 1986. The law enacted in 1986 was the first to address illegal immigration. He supported that bill, but said "We didn't anticipate the tremendous amount of false documents that would be created to allow people to get around the law.

He said In 2014 an immigration reform law passed the Senate but was not voted on in the House.

"We have a broken immigration system," he continued, citing EB-5 as an example. "This law was supposed to allow foreign entrepreneurs to come into areas of high unemployment and rural areas to help fight unemployment. But now, 65 percent of EB-5 immigrants go to Manhattan. We should allow engineers to immigrate because there is a shortage in the workforce," he added.

"But first, it's essential we secure the border. We need to do it to have credibility when we pass immigration laws."

The nuclear agreement with Iran also generated a lot of discussion. Grassley said he opposes the deal because "it leads to a more dangerous world. It will allow Iran to have a nuclear weapon in 10 years." He said originally the deal called for immediate unannounced inspections of Iranian facilities, but the final version of the deal allows a 24 day delay between a request for an inspection and the actual inspection.

"The International Atomic Energy Agency (IAEA) has secret deals with Iran that we don't know the details of," he said.

"This is an agreement, not a treaty. An agreement does not require approval of congress, but agreements are usually used for much less important things than this," he said.

He said of the sanctions, "We had them on their knees, and we let them go."

Another person said "What can we do as citizens to stop this nuclear deal with Iran? It is going to destroy our country. I have regularly written letters to the president, and to congress, but they don't have any impact."

Grassley replied, "Every day I get a report on my mail, and we answer every one, but right now I'm running 8000 letters behind. I try to answer the oldest ones first, and I have about 600 letters more than 90 days old. We try to group letters by content so we can answer as many as possible with the same letter. But it does matter- every member of Congress looks at their mail, even if they don't reply."

Another citizen said, "I am for this deal because right at the top of the first page it says "Iran will never be allowed to acquire a nuclear weapon. And Iran will voluntarily give up the nuclear material they already have." Grassley replied "After 10 years, Iran can have a nuclear weapon. And only Iranians take the actual samples."

"By the time Iran gets a nuclear weapon, it will be too late," said one man. "Iranian leaders have said the agreement will have zero effect on their nuclear program."

Mayor Jon Kruse thanked the Senator for the funding that allowed Storm Lake's wastewater treatment plant to be upgraded.

A question was asked about the Waters of the U.S. rule. Grassley pointed out the Sixth Circuit court had issued a nationwide stay, and that the Interior Appropriations Bill blocked funding for the measure.

When asked about defunding Planned Parenthood, Grassley pointed out the difficulty of getting 60 votes to pass the measure.

A parent of two soldiers expressed concern about the reduction of the military budget. Grassley said the current administration is cutting military spending to fund entitlements, and said "We get a new president next year. We can change that."

Responding to a question about Social Security, he said, "We passed a measure that will fund Social Security 100% through the year 2033, as far as we can predict what will happen between now and then. After 2033, we will fund it at 75 percent."

Another Social Security question regarding Cost of Living raise came up. Grassley said if there is no COLA this year, it would be the 3rd time in 42 years it has happened.

The final question was whether Obamacare was a good thing or a bad thing. Grassley said a small businessman told him "It's killing us." But for people with existing conditions and 26 year-olds who are getting coverage under their parents, it's a good thing. "We need to think about the people who are affected by the law," he said. "Ultimately I think it will lead to rationing of healthcare."