Investor visa: A way out of the Covid-19 conundrum 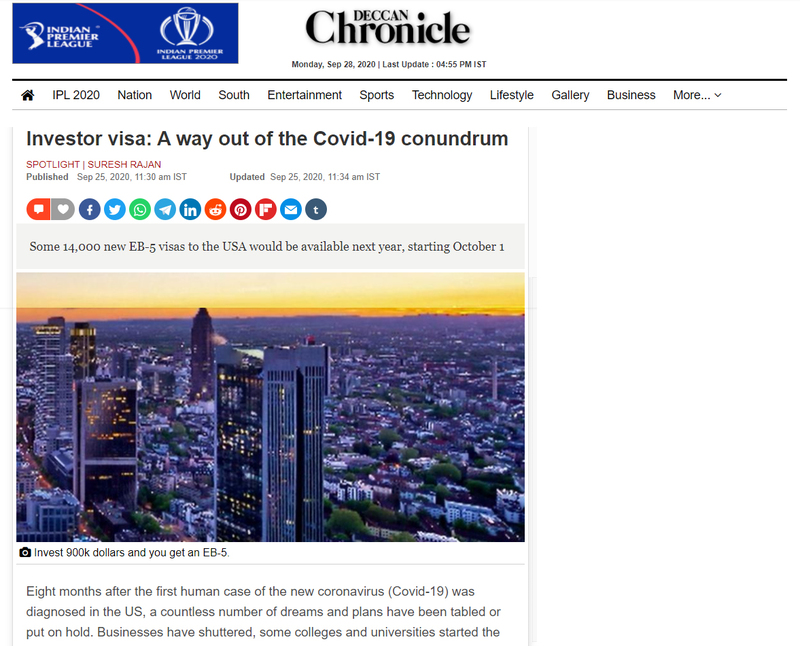 Some 14,000 new EB-5 visas to the USA would be available next year, starting October 1

Eight months after the first human case of the new coronavirus (Covid-19) was diagnosed in the US, a countless number of dreams and plans have been tabled or put on hold. Businesses have shuttered, some colleges and universities started the fall fully remote, and racial strife is adding to the turmoil in the country.

While “unprecedented times” is now a cliché for describing this time we are in, it’s also apropos to describe this year as a time like no other. If someone were to make a movie about the 1918 Spanish Flu, the Great Depression, and 1968 race riots all happening at once, it would look and feel like 2020.

Amid all the uncertainty in the US surrounding public health, job security, unemployment figures, and education, no one wants to put their future on hold. Foreign investors will continue to see opportunities to invest in US businesses and in support of creating more jobs and securing permanent US green cards.

Despite the pressures that the pandemic and surrounding rhetoric have placed on immigration and some visa programs, the EB-5 Immigrant Investor Programs continues to be a viable, solid alternative to getting a quality US education and becoming US residents.

Pressures on other visa programs

The topic of immigration has received particular attention from the Trump administration this summer and has targeted some visa programmes but not others.

Then the administration said international students would have to transfer or leave the country if their universities opted for online-only learning this fall; this proclamation was later rescinded after major universities like Harvard and MIT sued.

On August 19, exemptions to the June order were announced for tech and healthcare workers who would be resuming employment with the same employer. Even then, there’s an uncertainty around these visas that cannot be shaken.

As a consequence, we are likely to see renewed interest in the EB-5 program, which provides mutually beneficial arrangements for immigrants and job creators. A one-time investment of $900,000 for a new US business that creates at least 10 jobs for US workers earns the investors green cards and the ability to achieve permanent residency.

The “at-risk” capital is returned after the permanent green cards are received. Students who take advantage of this program are not limited by the industry they will work in after graduation — unlike other visas — and they do not have to worry about having to re-apply for visas or work permits.

In an average year, about 10,000 EB-5 visas are issued per year, and just under half that figure was used as of June over the course of fiscal year 2020 (which ends September 30), according to department of state visa control chief Charles Oppenheim in a June IIUSA webinar.

He acknowledged issuance has been slowed by the pandemic impacts, and he predicted the programme could gain at least 4,200 new visas in FY2021. In other words, we could see 14,000 new EB-5 visas next year (starting October 1).

This is good news for residents of countries that have limits on the number of immigrant visas or that tend to have a higher number of EB-5 applicants.

Part of the sluggishness this past year was due to the limitations or resistance to in-person meetings and the increase in the minimum investment from $500,000 to $900,000 that became effective last year. Applications for EB-5 could take longer for investors to make if they cannot see projects firsthand.

Another shift we’ll see from the pandemic’s impacts is the categorisation of Targeted Employment Areas (which are rural or high unemployment areas) toward the end of 2021, as some regions in the US have been hit harder than others.

This could open up or shift opportunities for some investors. Similar to the most recent financial crisis, when stock market return potential has diminished, investors in a strong position are likely to turn to real estate for stability, as demand in real estate is increasing.

High net worth investors may also be enticed to put their funds toward other countries, such as Portugal, whose Golden Visa Program is attractive for fast-tracking residency into the European Union.

Taxation in Portugal is considered more favourable and can be an important factor as investors and their families decide where to reside. The country also offers universal health care and affordable yet quality education.

In the coming months, businesses are going to be picking up the pieces. Some international students may have opted for a gap year rather than deal with visa uncertainty and the limits of virtual-only learning.

The next year could be an opportune time to plan carefully the kind of future families and investors want to establish for themselves.