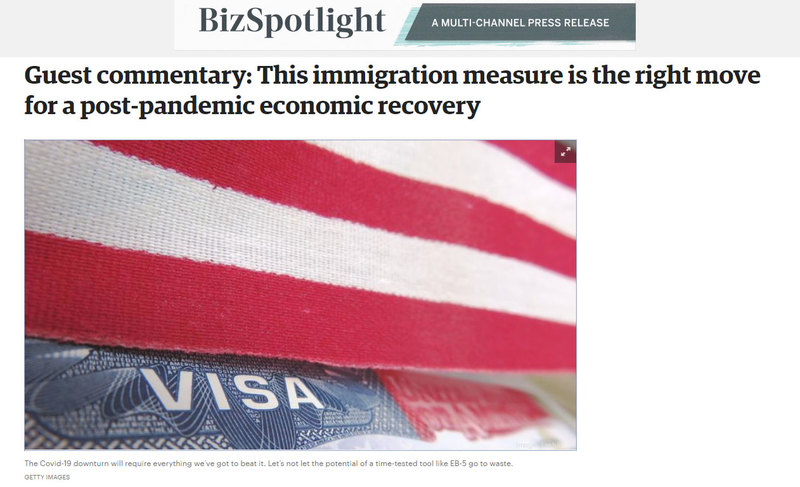 Despite the talk of expanding the EB-5 immigrant investor program in Congress’ $2.4 trillion stimulus efforts, nothing further has progressed, as the initial financial response to the Covid-19 pandemic had to prioritize our most pressing public health and unemployment issues.

But with another package now on the horizon, federal lawmakers would do well to not let EB-5 expansion slip through the cracks again. After all, expanding the program will help accomplish what any stimulus package intends to do: stimulate the economy.

Just look at how the program worked in the wake of our last recession a decade ago: Back then, EB-5 — which offers green cards to immigrants whose investments in U.S. businesses create at least 10 permanent, full-time jobs — provided sorely needed (and inexpensive) capital. As interest in it soared, so too did the benefits to the American economy. By one estimate, the program created over 276,000 jobs and contributed more than $37 billion to our country’s GDP between 2010 and 2015.

And, unlike the stimulus under former President Barack Obama, which the Congressional Budget Office suggests cost U.S. taxpayers between $540,000 and $4.1 million per each job created, EB-5’s job creation comes at zero cost to the U.S. taxpayer.

The crisis we’re facing now will also reach historic levels. As of April 2, data from the Center for Financial Economics at Johns Hopkins University showed that the unemployment rate could reach 20% in the next six months. The stock markets are all over the place, and, as capital dries up, lenders will be more conservative. Meanwhile, investors with dry powder on hand will be on the lookout for ways to grow their portfolios and create a positive social impact where it’s needed most.

In this environment, it seems only logical that we take all the alternative sources of inexpensive capital — and the corresponding beneficial community impact — we can get. Data from the U.S. Department of Commerce shows that by adding just 1,500 extra EB-5 visas (significantly less than the discussed boost of 65,000), we would create roughly 8,000 permanent American jobs.

So, what’s the holdup?

Well, some immigration critics have suggested that expanding the program now is “Washington at its worst.” In an interview with Politico, for example, RJ Hauman, government relations director at the Federation for American Immigration Reform, said we shouldn’t use a “coronavirus package to give more green cards to shady investors from the country where the virus originated.”

This critique is misleading. It’s not as if expanding the program now will mean an influx of thousands of new immigrants arriving on our shores tomorrow. It’s not even about creating construction jobs for people who are, in the near term, rightly staying home. It’s about helping the U.S. economy recover when the outbreak inevitably passes, a significant recession unfolds and impacted communities need help.

And to be clear, the immigrants who do eventually make it to the United States through EB-5 are far from “shady.” U.S. Citizenship and Immigration Services, in addition to rigorous background screenings, is hypervigilant about tracing applicants’ funds back to the source to ensure they were earned legally. These investors, who account for only 7% of employment-based visas and 1% of permanent visas, are actually screened more thoroughly than any other immigrant category.

Others have called EB-5 a “green card for sale” program, citing instances of fraud and the lack of funds given to rural communities. And sure, like nearly all unique investment models, the program is susceptible to bad actors. That the process is extremely complex and challenging to track doesn’t help matters; each investor’s application ends up being nearly 3,000 pages long.

But these critiques, along with the political gesturing and partisanship surrounding EB-5, doesn’t mean we should disregard all of the good things it provides. We just need to be more diligent about the integrity and transparency of the EB-5 fund process: Using end-to-end process management (beyond middle and back-office accounting and administration); tracking, in real-time, the required sector compliance and impact metrics; and onboarding, managing and reporting on large pools of limited partners regardless of average investment size. This isn’t some pie-in-the-sky proposal; the technology and processes exist to make it happen.

Expanding EB-5 won’t rebuild the economy on its own, but there are few — if any — downsides.

Why not expand a program that brings in more jobs, infrastructure improvements and cheap capital during a recession — all at no cost to the U.S. taxpayer?

This Covid-19 downturn will require everything we’ve got to beat it. Let’s not let the potential of a time-tested tool like EB-5 go to waste.