Judge allows Stenger to travel to Canada and Japan for work 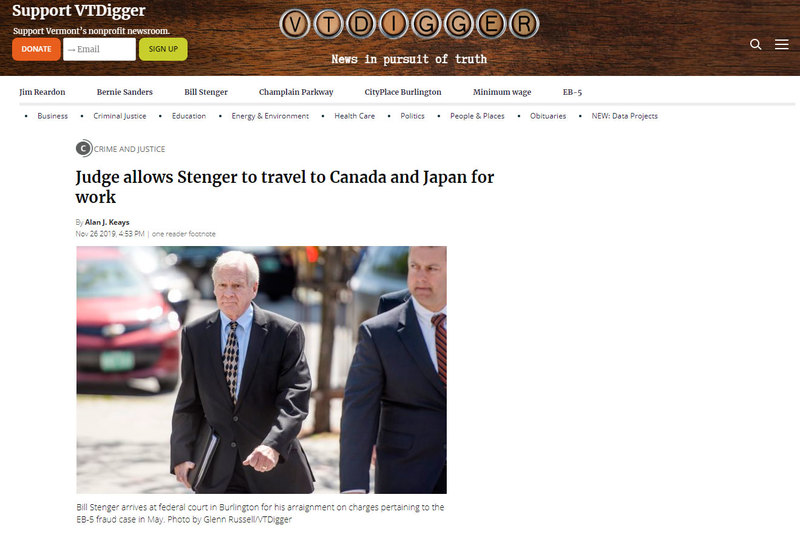 Bill Stenger arrives at federal court in Burlington for his arraignment on charges pertaining to the EB-5 fraud case in May.

A judge is allowing Bill Stenger, Jay Peak’s former president who is awaiting trial on federal fraud charges, to get his passport back so he can travel to Canada and Japan to consult with ski areas in those countries.

Stenger, 71, of Newport, surrendered his passport in May when he was released on a $100,000 appearance bond after he pleaded not guilty to charges of wire fraud and making false statements to the government.

McArthur said that his client’s family lives in Vermont and he has no criminal history. Stenger, the attorney said, is seeking work as a ski area consultant.

“He is entirely reliant at this point on Social Security and this is a field where he can make some money,” McArthur said of Stenger, adding, “Not a significant amount of money, but enough to care for his wife and himself.”

Assistant U.S. Attorney Paul van de Graaf, the prosecutor in the case, objected to the return of Stenger’s passport. He called the request “highly unusual” for a person under indictment in a multi-million dollar fraud case and possibly facing a long sentence if convicted.

Van de Graaf added that if Stenger fled the country it would make it more difficult, and in some cases impossible, for the government to force his return to the United States.

“I just think as a principle we should avoid the situation,” the prosecutor said, adding, “His wife is under no conditions, they could leave and finish their years someplace else.”

Van de Graaf also talked about the importance of protecting people outside the country who may hire him without knowing the nature of the charges against him.

McArthur countered that he believed that companies would do their “due diligence” before hiring Stenger.

“I don’t think by allowing him to work in this capacity you will put other ski areas at risk,” McArthur said.

There are already companies that want to employ Stenger, McArthur said, but he needs to assure them he is going to be allowed to meet the requirements of the job, which include site visits of up to two weeks long.

McArthur added that Stenger would consult in areas of mountain operations and snow-making.

“Which countries are we thinking about specifically?” Crawford asked.

Crawford then agreed to Stenger’s request to get his passport back so he could work.

The judge added that he would limit Stenger’s travel to Canada and Japan, at least at this point.

For each trip, Crawford said, Stenger would be have to present paperwork to the pre-trial probation services verifying his work assignment.

In addition, Crawford required that Stenger pledge his house as security for his return, in addition to the $100,000 bond.

Stenger was charged in May along with Ariel Quiros, Jay Peak’s former owner, and two of their associates.

They were all indicted in connection with a failed project they headed to build a $110 million biomedical research facility in Newport financed with funds raised through the EB-5 immigrant investor program.

The U.S. Securities and Exchange Commission has termed the AnC Bio project “nearly a complete fraud.”

Prosecutors in court filings have referred to Stenger as the skilled marketer and manipulator of the group, bringing in political leaders to press conferences for the Northeast Kingdom projects that came with claims of hundreds of jobs.

Stenger has maintained his innocence to the charges against him.

Less than a week after the criminal charges were brought against Stenger, Michael Goldberg, a court-appointed receiver overseeing Jay Peak, fired Stenger from his consultant’s job to the receivership.

McArthur filed the motion earlier this month in asking the judge to allow his client to have his passport back.

That request prompted the hearing Tuesday.

Stenger faces a total of 10 federal charges that together carry a total maximum sentence of more than 100 years in prison if convicted.