EB-5 Visa changes: Only two months before cost of US entry rockets 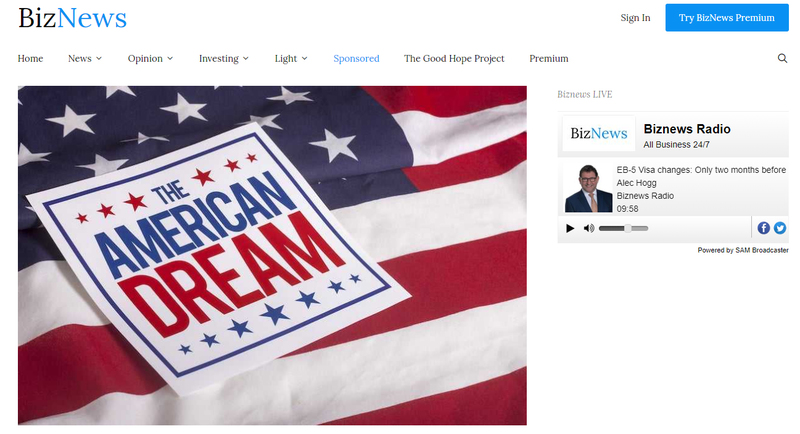 Bernie Wolfsdorf, the US’s top immigration lawyer, is being run off his feet right now. The Durban-born managing partner of California-based Wolfsdorf Rosenthal, who is currently in SA, says the reason behind his sleep deprivation is the rush by clients to take advantage of the EB-5 visa ahead of radical adjustments that will be imposed in November. He says “businessman” Donald Trump appreciates the popularity of the investment-driven ticket in to the US and is substantially hiking the price from the current $500,000 investment to as much as $1.8m. He was a guest on this week’s episode of Rational Radio.

Let’s kick off the program with Bernie Wolfsdorf who is with a firm in the United States – pretty high up on the rankings of immigration lawyers. We’ve asked him to give us some insight into a huge thing which is changing at the moment. Bernie, you’re in South Africa at the moment, do you hail from here originally?

That is absolutely correct.

Here’s the reason why.

At the moment, the EB-5 or immigrant investor program, involves an investment of $500,000, but we have an unusual president. His name is President Donald Trump and he’s a businessman. He has increased the price of the minimum investment – from $500,000 to $900,000 – effective November 21 2019. So we have this little window of about two months. At the moment we can invest in what they call top level projects and not have to go into rural areas. So in reality to get the kinds of projects and investments that are currently available, after November 20, will cost $1.8m, a 350% increase. That’s why I’m here – the news is spreading rapidly. It’s almost like a feeding frenzy right now – this door that is closing. It’s a little bit sad. Maybe some presidents in the future will open it but America is not as welcoming as it has been.

Four friends of mine – South Africans who went into a low employment area in California – invested about R5m each and they’ve built quite a nice business. Is that what you’re talking about here – the EB-5 visa? In other words, bring entrepreneurs and their money into the United States and we’ll make it nice for them to stay.

It’s a bit of a complex program. If you make a $500,000 investment into a job producing project, it’s not so much the investment, they want to see job creation. Everywhere in the United States – everywhere in the world – wants to see jobs being created. So this money is not put into a bank, it has to go into a job creating enterprise. What they do is give you a two year conditional green card and thereafter you have the condition removed, then you get the full green card. After five years – now we’re six, seven years down the road – you can apply to be an American citizen.

As I explained to all my South African Clients – a dual citizenship. A note of silliness, I tell all my clients to remember that when you have your American passport – that’s the blue one – that goes on the right hand side but the green passport goes on the left hand side over your heart. Make sure that when you go to South Africa, you give them the green one and when you go to America you give them the blue one. If you get that mixed up you might just get kicked out.

And there’s no problem in having dual citizenship from an American perspective?

Bernie, just to go back into the basics of all of this. If South Africans are looking to get to the United States – perhaps to live there at some stage in future or not – if the EB-5 visa gets you in, do you have to go? Do you have to follow your money?

I keep getting this question and I think that a lot of people have got bad information. The green card requires that you live in the United States. It is true and there’s a misconception in my opinion. There are rules and regulations of course and the rule is if you have a green card you are expected to live in the United States. But the good news is that there is something called a re-entry permit, sometimes called the white passport. South Africans actually like it because you can get visas – and it’s easier than getting a visa in a South African passport. They know once you have a green card you obviously have a place where you permanently resided in the United States so they’re not worried that you’re going to jump ship as it were.

But the simple bottom line is that they expect you to live in the United States. The re-entry permit does allow you to be out for up to two years at a time and that can be renewed for another two years and then one year at a time after that. I have seen people renew it year after year after year. But I also like to be very direct with my clients. It’s a hassle to go through this because you have filing fees and lawyers, but the re-entry permit is possible.

We’re doing a lot for South Africans because the life here is still pretty good. Most of my clients continue to have business interests here. I live in Los Angeles, we have seven offices throughout the United States with 150 employees. We are probably the biggest immigration law firm in Los Angeles. But I’d like to point out something interesting. Los Angeles has the largest Korean community outside of Korea. The amount of trade between Korea and the United States is phenomenal. And who are the people who are making this happen? It’s obviously the Koreans who immigrate. So one of the things that I would like to point out to those South Africans who see immigrating as not being loyal. Global trade is a good thing. Having South Africans abroad who are doing business with South Africans – Import, Export, Development – this is a global economy and with a computer you can work anywhere in the world. I just met with a client – a small software development company – and they’re subcontracting to an American company. So this is where the world is going.

This EB-5 green card opens the door and numerous opportunities. Unfortunately this is expensive. $500,000 at today’s exchange rate is a hell of a lot of money. But some people see it as a currency hedge. I’m not a currency specialist and I don’t give any advice on that topic, but I do know that three years ago the rand was worth a lot more.