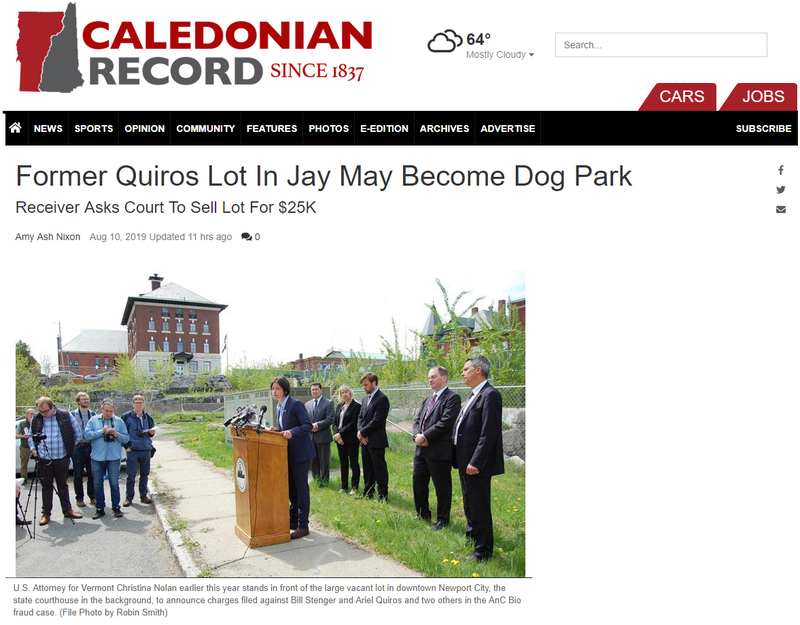 U.S. Attorney for Vermont Christina Nolan earlier this year stands in front of the large vacant lot in downtown Newport City, the state courthouse in the background, to announce charges filed against Bill Stenger and Ariel Quiros and two others in the AnC Bio fraud case.

An almost 14-acre property owned by Ariel Quiros is set to become a dog park in Jay.

The site has gone downhill since the EB-5 scandal that rocked the region.

According to the court filing earlier this week, the real estate broker for the property informed the receiver in charge of the property “that the condition of the property has deteriorated: people have been sleeping in their cars on the property, trash has accumulated, and the grass needs to be cut.”

Federal receiver Michael Goldberg, the attorney who has been handling the assets of the receivership put in place in April of 2016 when the federal Securities and Exchange Commission seized much of Quiros’ property, including Burke Mountain Resort and Jay Peak, filed a motion in federal court asking for permission to sell the property at 267 Revior Flats in Jay.

In the filing Aug. 5 in U.S. District Court for the Southern District of Florida, Goldberg asked the judge in the case to approve the sale at $25,000 for the lot.

The purchaser, James Paquette, put down $5,000 for a deposit.

Much of Quiros’s former assets and some bank accounts became the property of the federal receivership last year as part of a settlement with the SEC in which Quiros surrendered more than $80 million in assets and funds.

Quiros did not admit to nor deny the SEC allegations against him, which contained more than 50 counts. He later reached a settlement with Vermont authorities for $2 million+ more in surrendered property, likewise neither admitting to nor denying the claims brought by the Vermont Attorney General.

He now faces a federal indictment on criminal charges.

His former partner, Bill Stenger, similarly reached settlements with the feds and state, for $75,000 and $100,000, and likewise neither admitted to nor denied allegations.

Stenger was never accused of stealing from investors, and Goldberg said forensic accounting showed he did not personally benefit from the ‘Ponzi-like’ scheme.

Like Quiros, Stenger too was recently indicted in a criminal case in federal court in Burlington, along with two other Quiros associates, Alex Choi and Bill Kelly.

Quiros was accused of having misappropriated more than $200 million in investor funds, and stealing another $55+ million to fuel his lavish lifestyle, court records showed.

In the motion filed Monday to sell the lot in Jay, Goldberg wrote, “The Receiver seeks to sell (the lot at 267 Revior Flats in Jay) by private sale to individuals who have no relationship to the receivership case. The sale price is much lower than the approximately $160,000 Mr. Quiros paid for the property due (to) changes to the flood plain caused by Hurricane Irene.”

“The Receiver believes the sale is consistent with the market rate for properties of similar size and location and is in the best interest of the receivership estate,” wrote Goldberg, noting its sale would benefit investors and other creditors.

Quiros and his wife purchased the lot in question on Jan. 29, 2010 or thereabouts, wrote Goldberg, from Roland and Judith Desrochers, for $164,000. They continued to hold the property until Oct. 31, 2014, when it was transferred to a Florida limited liability company Quiros controlled, AOQ, LLC. Quiros turned the lot over to the receivership on March 6, 2018, as part of the court’s Final Judgment, to which he agreed.

The 13.8-acre vacant site later was reduced in price after Goldberg “learned that the force of Hurricane Irene (in 2011) reconstructed the landscape by moving the river that runs through the property. As a result, only 8.6 acres of the property is usable, as the remainder of the property is located on a flood plain.”

“The property is not suitable for construction of a residence and only has value as a recreational property,” he advised the court.

According to the motion filed by Goldberg, “The owner of the adjacent property has offered the Receiver $25,000 to purchase the property, and intends to create a community dog park on the property.”