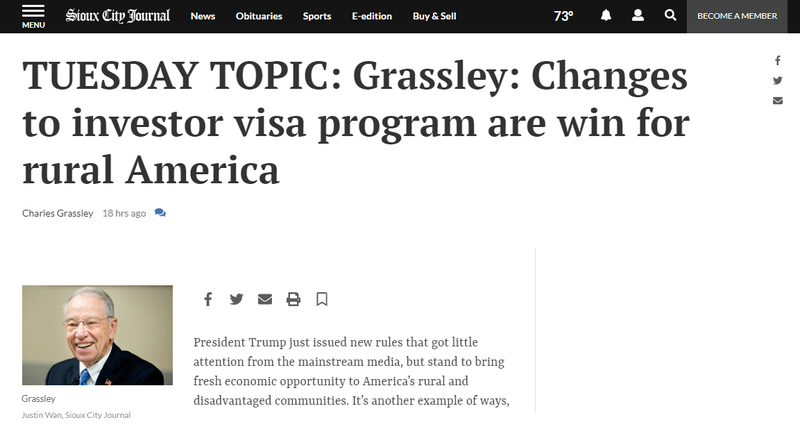 President Trump just issued new rules that got little attention from the mainstream media but stand to bring fresh economic opportunity to America’s rural and disadvantaged communities. It’s another example of ways, big and small, that the president is going to bat for the forgotten heartland and taking the country back from the swampy beltway elitists.

The rules bring much-needed reforms to the fraud-stricken “EB-5” investor visa program. It will raise the investment threshold from $500,000 to $900,000 for development in needy areas, and raise the threshold in non-needy areas from $1 million to $1.8 million. The change will also tighten standards for what’s considered a blighted or high-unemployment neighborhood.

Recent college graduates weren’t even born when the program was written into existence. It started with a reasonable and even admirable objective: spurring investment and development in economically distressed communities and in rural America. It was supposed to give a boost to the places most frequently overlooked by big, coastal financiers.

Aspiring immigrants to the United States could invest their resources in the communities they soon hoped to join. They would create businesses and jobs for their new neighbors. It would be a big and probably risky investment, but that was the point. Help build America to be part of America. That’s what Congress intended.

But big-money interests drew maps that defined the “distressed areas” to conveniently cover wherever they wanted another skyscraper. All of a sudden, investment dollars intended for communities in need were being sucked up for glitzy projects in America’s most well-to-do neighborhoods. Real-estate developers sold expensive condos and created no new jobs for Americans, while the immigrants put no skin in the game. Their investments weren’t at risk and they didn’t so much as help build America as they helped rich developers get richer.

These real estate interest groups found a way to sell American citizenship and reap all the rewards for themselves. In doing so, they sold out their fellow Americans.

What’s worse is that the program also poses a massive security risk. Foreigners with ties to terrorism have tried to exploit the program. In China, the program is called the “golden visa, because government-connected billionaires can just buy access to America. Even President Obama’s Homeland Security Secretary Jeh Johnson warned about the potential threats.

To say the least, this program in its current form has left rural America high and dry when it promised to be a source of renewal. Rural communities and the Americans who live there could have been starting new businesses and reviving main streets, but the money poured into already wealthy cities and neighborhoods. Folks talk all the time about places left behind by the elite and the Washington insiders. The abuse of this program over so many years is a sorely perfect example.

The president’s new rules take critical steps toward righting the wrongs that have been allowed to fester by a Washington more intent on keeping the status quo to placate wealthy donor-developers.

Make no mistake, some of us in Congress tried to take action. For years I’ve worked on bipartisan legislation with members of the House and Senate to make the program function like it was intended. But each attempt was thwarted by big-business groups and the lobbyists working for investors in San Francisco and New York. They swoop in at the last moment to intimidate and donate. The only reason this system still exists is because swampy interest groups keep throwing money behind anti-reform campaigns.

A couple years ago, a candidate came along who promised to end this nonsense, to drain the swamp and remember the forgotten Americans. Thankfully, he’s now president and is doing something for rural America that Congress hasn’t been able to accomplish: brush away the big-money lobbyists and restore some integrity to the EB-5 program.

With President Trump’s new rules in place, those interest groups won’t be able to draw the maps to benefit themselves anymore. Rural America will finally start to see the benefits of a nearly 30-year-old program. Main Streets and entrepreneurs in small towns will get a shot because the president keeps draining the swamp.