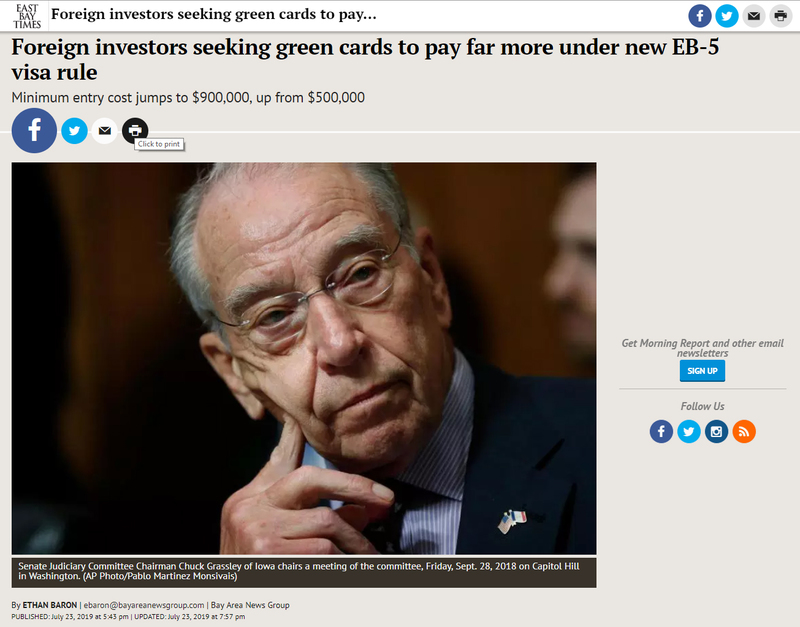 A U.S. visa that awards green cards to foreign investors will require a much larger investment under new rules released today and slated to take effect Nov. 21.

Foreign citizens are already contacting immigration lawyers about getting their EB-5 investor visa applications in before the new rules impose higher costs, but once the rules are in place, EB-5 investments will drop and fewer jobs will be created through the program, an immigration lawyer said.

The EB-5 visa, created in 1990 to stimulate the economy through job creation and capital investment, will under the new rules require a minimum investment of $900,000 instead of the current $500,000, U.S. Citizenship and Immigration Services said. That minimum amount will be for investments in businesses in rural areas or regions of high unemployment. For investments in other areas, the minimum will be $1.8 million, compared to the current $1 million.

Homeland Security had originally proposed a new minimum of $1.35 million.

The visa will still require the creation of at least 10 full-time jobs but the new rule strips states of the ability to designate areas as rural or high-unemployment “Targeted Employment Areas” to qualify EB-5 applicants for the lower investment threshold. The U.S. Department of Homeland Security will make all such designations, according to the new rules.

The EB-5 program provides a two-year conditional green card upon issuance of the visa, and visa holders who remain eligible can obtain full permanent residency after two years. Up to 10,000 EB-5 visas are issued per year.

An industry has emerged around the EB-5 program, with developers marketing projects to foreign citizens, Wexler said. But because an investor’s main priority is almost always getting a green card, returns on the investments have typically been less than 3 percent, he said.

“This isn’t really a financial investment,” Wexler said. “Clients view the return on investment as the value of the green card.”

Republican Sen. Chuck Grassley of Iowa said in a press release Tuesday that he’d been warning for most of the last decade that the EB-5 was being abused “to steer investment away from rural America. He added that the new rules would bring opportunities to rural America and “communities in need.”

Last week, Grassley said on the Senate floor that there were examples of EB-5 fraud from all over the country.

“In Chicago, a businessman defrauded 290 investors of $150 million in funds that were supposed to be used for the construction of a hotel and conference center near O’Hare Airport,” Grassley said.

“In Palm Beach, Florida, a real estate developer and real estate attorney teamed up to defraud 60 Chinese and Iranian EB-5 investors of $50 million. Instead of being used to fund the construction of a proposed hotel, it was instead used to pay personal taxes and purchase a 151-foot yacht. In Wisconsin, a businessman used over half of the $7.6 million in funds he had solicited from investors to pay for personal expenses including Green Bay Packers tickets and the purchase of a Cadillac Escalade.”

A May 2017 probe by Citizenship and Immigration turned up 19 cases within the EB-5 program that raised national security concerns related to terrorism, espionage, and unauthorized transfer of information and technology, Grassley said.

In the Bay Area, a lawyer and her firm’s office manager were charged earlier this year with criminal fraud, identity theft and obstruction of justice, as well as with civil fraud, over alleged crimes and abuses related to the EB-5 program. The Securities and Exchange Commission said that between 2008 and 2016, the two made $12.7 million in illegal commissions by referring more than 400 clients to groups that bundle investments from foreigners seeking EB-5 visas.

Applying for an EB-5 is a lengthy process that can produce a pile of documents a foot and a half high, and the money for the investment must be deemed lawfully earned and taxed, Wexler said. “We have to trace the path of every dollar of this investment,” he said.

Wexler said he hadn’t seen anything in the new rules, except perhaps the removal of states’ ability to designate Targeted Employment Areas, that would directly address abuse of the program.

While Wexler’s office and other immigration firms are seeing a spike in interest in the EB-5 because of the new rules, once the rules take effect, the number of investors will drop because of the higher cost, he said. “This is going to result in far fewer jobs being created,” he said.