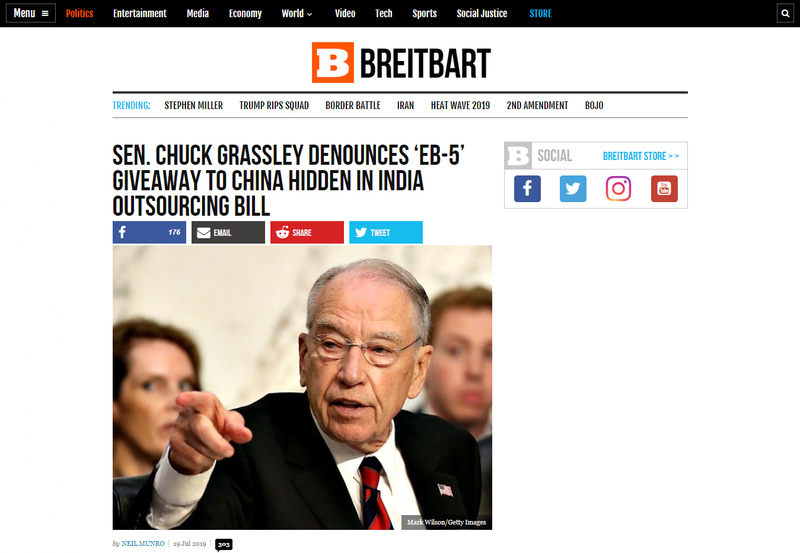 Iowa Sen. Chuck Grassley is throwing a flag on the stealth push by technology investors to expand the unregulated U.S.-India outsourcing economy.

The business-backed bill to expand the binational outsourcing economy, titled HR.1044, quadruples the supply of valuable green cards to Indian workers who agree to take college-level jobs from American graduates. On July 10, it passed the House, 365 to 65. The Senate version has yet to be approved by the Senate Judiciary Committee.

But the Indian outsourcing was packaged with language that allows real estate investors to get a fast track for the annual delivery of almost 10,000 EB-5 green cards to lenders from China, Indian, and other countries.

Grassley’s office told Breitbart News he opposes the House’s EB-5 language because it does not include any reforms for the controversial EB-5 program: “Senator Grassley won’t support any version of the legislation that allows the EB-5 industry to continue to recruit new investors, especially without addressing the rampant fraud, abuse, and national security vulnerabilities in the program.”

Grassley’s opposition is a significant factor in the clubby GOP caucus, not least because he has held up the green card giveaway bill for ten years. His opposition to the House’s EB-5 language — as well as the many other problems in the HR.1044 outsourcing push — may persuade Majority Leader Mitch McConnel and other GOP senators to stop the S.386 bill from getting a vote in committee or on the Senate floor.

Early this year, Grassley lifted his decade-long opposition to an earlier Senate version of the bill. Grassley raised his opposition after Utah GOP Sen. Mike Lee agreed to include some minor reforms of the H-1B outsourcing program, which keeps at least 900,000 lower-wage foreign workers in U.S. white-collar jobs.

The Senate bill, S.386, is being pushed by Lee and Sen. Lindsey Graham, the chairman of the House Judiciary Committee.

Grassley is also touting the White House’s long-delayed regulatory reform of the EB-5 citizenship-selling program. The Office of Management and Budget approved the regulation in late June, but it has been delayed at the last moment as it awaits final approval from White House officials.

On July 1, Grassley tweeted his frustration about the White House’s delay to the EB-5 reforms:

Good news! @OMBPress cleared the #EB5 modernization rule last week. This is a good step toward reforming the program so that it more closely aligns with Congressional intent to benefit our economy and create jobs for American workers.

He also argued that the program has been gamed by the EB-5 industry to redirect the foreign loans away from less-developed Heartland regions towards many high-developed coastal sites, such as New York. Grassley tweeted:

The pending White House regulation is intended to shift more of the EB-5 money away from coastal projects over to Heartland projects, for example, from affluent New York City to underdeveloped Ohio neighborhoods.

Under existing rules, developers in New York, Dallas, and Silicon Valley may get a larger share of the EB-5 funds by claiming their projects will serve underdeveloped zones in large cities. The developers justify their claims by creating a custom-designed “Targeted Employment Area,” which includes the development site and nearby underdeveloped sites.

“A lot of the developers are gerrymandering these target areas, these underserved areas, so they can build a Manhattan skyrise. … That siphons money from rural and underdeveloped areas,” a source told Breitbart News.

Also, Grassley has argued that the EB-5 program is plagued by corruption and is being used by Chinese groups to undermine U.S. security.

U.S. investors like the EB-5 program because it allows them to get low-interest loans from foreign people, who get their money back — and a green card — years later.

The EB-5 program is stalling because the caps on Chinese receipts of EB-5 ensure that the next Chinese buyers must wait perhaps 20 years to get their green cards. This delay makes it difficult for real estate investors to sell green cards to the next wave of potential Chinese lenders. The current caps are also threatening to hurt the sale of green cards to the new waves of Indian and Vietnamese customers.

If the law passes, all EB-5 lenders would be placed in the same line for green cards. That would shorten the wait time for existing Chinese lenders, would set a standard global delay for all future lenders that would ease sales to prospective Chinese lenders.

However, any delay is risky for lenders because commonplace disruptions in the real estate sector can push the lenders out of the program and wipe out their loan, according to reports in an expert blog on the EB-5 program, Lucidtext.com.

Lobbyists persuaded the House leader of the HR.1044 bill, Democratic Rep. Zoe Lofgren, to remove the country caps from the House EB-5 bill.