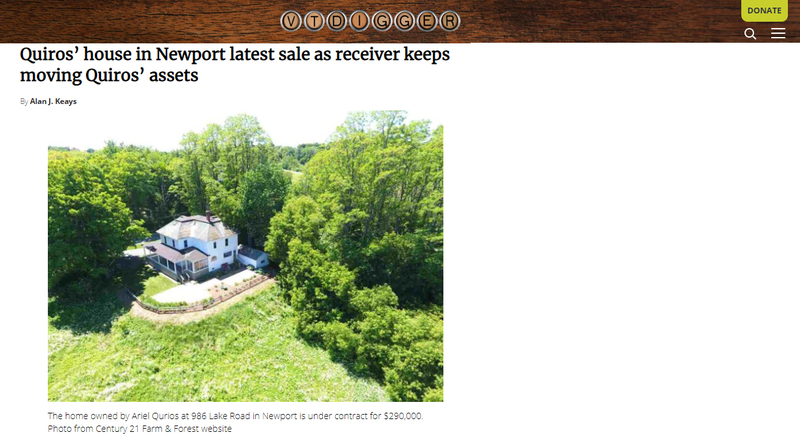 The Vermont real estate holdings of the indicted former owner of Jay Peak continue to shrink as the person now overseeing those properties says he has a deal to sell one of them in Newport for nearly $300,000.

The residential property at 986 Lake Road being sold is located next to a site known as the former Bogner plant where Ariel Quiros and his fellow developers had proposed constructing a $110 million biomedical research center, AnC Bio Vermont.

That biomedical facility project never got off the ground and the financing of it is now at the center of a criminal case brought in May by federal prosecutors against Quiros, his former business partner Bill Stenger, as well as two other associates.

Quiros has already reached a settlement in a civil lawsuit brought by the U.S. Securities and Exchange Commission, agreeing to surrender and estimated $81 million in properties he owned, including Jay Peak and Burke Mountain.

Those other real estate holdings in the settlement include the residential property on Lake Road that Michael Goldberg, a court-appointed receiver managing Quiros’ assets, says in a court filing this week he has a deal to sell.

Goldberg wrote he entered into a purchase and sale contract in late June with Kevin and Ellen Dion of Connecticut to purchase the property.

The real estate listing stated the home has recently undergone a renovation.

“Modern updates include a lovely country kitchen, master suite with a gorgeous master bathroom, and the former attic is now a kids’ or guest’s dream!” the listing stated.

The listing added, “The 3-sided wraparound porch leads you to the back patio where the views over the meadow to Lake Memphremagog are gorgeous.”

The receiver wrote in his filing that he has been trying to sell the residential property since June 2018 with an original listing price of $350,000, which was later reduced to $325,000, and attracted little interest.

The parties eventually agreed on a sale price of $290,000, the filing stated.

Goldberg still needs the approval for the sale from Judge Darrin Gayles, who is presiding in the federal court in Miami where the SEC settlement of the civil lawsuit was reached with Quiros.

That civil case was brought in federal court in Florida because Quiros resides there and it’s where many of his businesses were based.

“Based on recent sales and market trends, the Receiver believes the sale price is fair and reasonable,” Goldberg wrote in his court filing in support of the sale of the Newport property.

According to the filing, Quiors purchased the home on Lake Road in September 2011 through one of his companies for $200,000, primarily because of its proximity to the 26-acre Bogner plant site next door.

“According to documents provided by Mr. Quiros,” Golberg wrote, “the Property was purchased as part of a plan to assemble land for the AnC Bio VT facility and could have been used at a future date for expansion of the AnC Bio campus.”

Ariel Quiros arrives outside federal court in Burlington for his arraignment on charges pertaining to the EB-5 fraud case on May 22.

Instead, the SEC in its civil lawsuit brought against Quiros and Stenger in April 2016 termed the AnC Bio Vermont project “nearly a complete fraud.”

The lawsuit alleged the two men had misused $200 million of the more than $450 million they raised through the federal EB-5 immigrant investor program to finance several development projects in northern Vermont, including massive upgrades at Jay Peak.

But, the criminal charges related to the AnC Bio Vermont project are pending, with a hearing in the case set for Friday in federal court in Rutland.

The receiver now also oversees two other properties in Newport that were turned over to the SEC as a result of Quiros’ settlement of the civil case.

Those properties are the former Bogner plant on Lake Road, which is a vacant factory building on the outskirts of town, and another on Main Street in the heart of the city’s downtown.

That property in the city’s central business district had been slated for a four-story development proposed by Stenger and Quiros known as the Renaissance Block. It was to feature retail and office space as well as a hotel.

The site is now referred to as the “hole in the ground,” because buildings were razed but work stalled before construction began.

Those Newport properties, as well as others formerly belonging to Quiros, including Jay Peak ski resort, are currently up for sale.

“The hole” in downtown Newport, where a Stenger-Quiros development was planned but never built, in May.

Goldberg has previously sold off two New York City luxury condos owned by Quiros, selling them for a little more than $6 million combined.

Newport Mayor Paul Monette said Tuesday that he hadn’t heard of the sale of the residential property on Lake Road until told about it by a reporter.

“It’s a start, you have to start somewhere,” he said of the news.

Now, the mayor added, he looks forward to the day both the AnC Bio site and the Main Street downtown property sell.

Asked if he’s heard if any sale may be coming soon on those two sites, Monette responded, “No, I have not.”