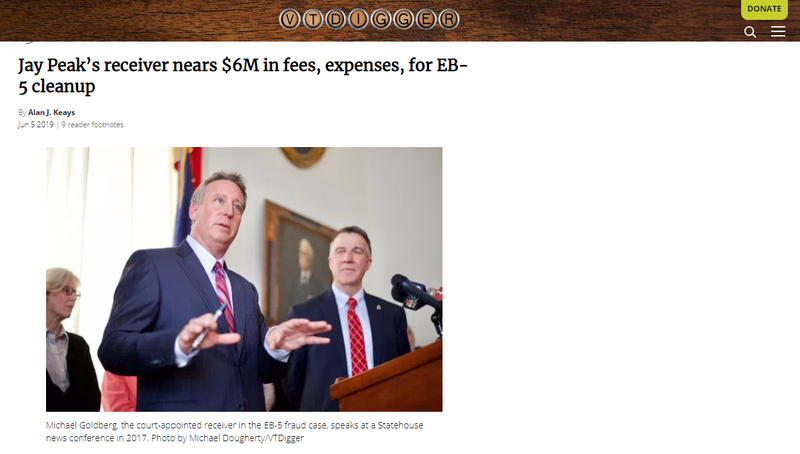 Michael Goldberg, the court-appointed receiver in the EB-5 fraud case, speaks at a Statehouse news conference in 2017.

The Jay Peak receivership’s price tag for overseeing the resort and managing other properties in northern Vermont at the center of an EB-5 investor fraud scandal is approaching $6 million.

The filing by Goldberg came days after Quiros and Stenger, as well as Bill Kelly, a key adviser to Quiros, and Jong Weon (Alex) Choi, were all indicted last month by a federal grand jury in Vermont on criminal charges including fraud and making false statements to the government in connection with an EB-5 project.

The charges stem from a failed biomedical research facility, AnC Bio Vermont, proposed for Newport that authorities said was “nearly a complete fraud.”

Quiros, Stenger and Kelly have all pleaded not guilty to the charges against them. Choi, who operated AnC Bio Korea, remains “at large,” prosecutors say.

The fee request from Goldberg spans six months, from Sept. 1, 2018, to Feb. 28 of this year, and totals $695,605, according to the receiver’s latest fee request filed in federal court in Florida. That’s where the federal lawsuit against Quiros, a Miami businessman, was brought more than three years ago by the U.S. Securities and Exchange Commission.

Goldberg’s fee request still requires the approval of Judge Darrin Gayles, who is presiding over the case. Goldberg had previously submitted fee requests over the more than three years of his receivership totaling $5,047,454.

If the latest is granted, the receiver’s total fees and expenses so far will total $5,743,059 since Goldberg’s receivership appointment.

In the most recent filing, Goldberg wrote that he and his firm, Akerman LLP of Fort Lauderdale, Florida, as well as the other professionals working with him, have reduced their standard rates.

For example, he wrote, at Akerman, instead of the standard rates ranging from $550 to $750 an hour, all partners are billed out at $395 an hour. Also, associate and paralegal rates are capped at $260 an hour.

“These discounts equate to a $192,416.50 reduction in Akerman’s fees,” according to the receiver.

A breakdown of the fees and expenses for the other professionals assisting the receivership from Sept. 1, 2018, to Feb. 28, shows:

— Kapila Mukamal, an accounting firm based in Florida, seeks fees and expenses totaling $126,710.

— Klasko Immigration Law Partners LLP, of Pennsylvania, which has worked for the receivership in assisting with EB-5 immigration matters, is seeking payment of $20,623.

The money to pay the fees and expenses comes from legal settlements in the case and from the sale of Quiros’ assets.

According the civil lawsuits filed by the regulators three years ago, Quiros and Stenger misused $200 million of investor funds raised through the EB-5 program.

The investments were to pay for massive upgrades at Jay Peak and additional projects in other communities in northern Vermont, including the proposed biomedical facility in Newport.