Post Offering Obligations for EB-5 Issuers: “You Closed, Now What?” 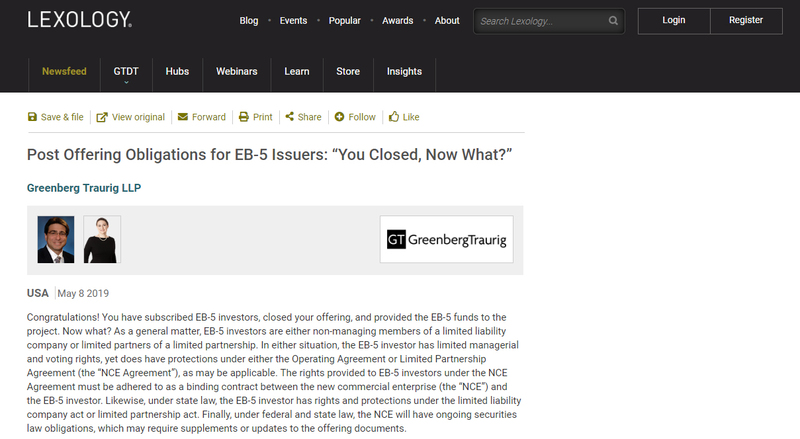 Congratulations! You have subscribed EB-5 investors, closed your offering, and provided the EB-5 funds to the project. Now what? As a general matter, EB-5 investors are either non-managing members of a limited liability company or limited partners of a limited partnership. In either situation, the EB-5 investor has limited managerial and voting rights, yet does have protections under either the Operating Agreement or Limited Partnership Agreement (the “NCE Agreement”), as may be applicable. The rights provided to EB-5 investors under the NCE Agreement must be adhered to as a binding contract between the new commercial enterprise (the “NCE”) and the EB-5 investor. Likewise, under state law, the EB-5 investor has rights and protections under the limited liability company act or limited partnership act. Finally, under federal and state law, the NCE will have ongoing securities law obligations, which may require supplements or updates to the offering documents.

Depending upon the terms of the NCE Agreement, the EB-5 investors may have additional voting or managerial rights. To the extent an issue arises that is not contemplated by the NCE Agreement, the duty owed to an investor may be contemplated under state or federal law, as discussed below. It is also a good idea to review the offering documents, as many times representations are made to EB-5 investors via the private placement memorandum as to the project, their rights, and the obligations of the NCE manager, which are not included in the scope of the NCE Agreement.

It is important that the NCE manager is involved in the early stages of negotiation and drafting of the NCE Agreement. Early involvement with corporate and securities counsel will focus the NCE Manager on the level of their involvement, their expected obligations, the obligations they wish to undertake, and what commitments the NCE can and will honor. Frankly, this is not a task that should be left to typical cookie-cutter Operating Agreements as such will surely fail to take into account the specific obligations that the NCE will be required to comply with or abide by in connection with performing and maintaining its EB-5 obligations as well as adhering to applicable law.

State law maintains rights for the protection of investors. Most states tend to have similar statutory constructs relating to investor rights, and the formation and operation of limited liability companies and limited partnerships. For the sake of convenience, we will focus our discussion to Delaware law relating to alternative entities, as many entities form in Delaware and many states follow Delaware’s lead.

What does this mean, particularly, to an EB-5 investor? As the Delaware Chancery Court noted, “[d]espite the appearance in its name of the terms “good faith” and “fair dealing,” the covenant does not establish a free-floating requirement that a party act in some morally commendable sense.” Thus, while there is no moral or equitable requirement under the law that the Delaware courts would examine, they would, however, look to the contract itself and what the parties would have agreed upon if the issue had arisen upon execution of such agreement. Therefore, in the event that the NCE Agreement is silent as to a particular issue (we have found that this comes up fairly often concerning redeployment), its best practices to put yourself in the shoes of the EB-5 investor, to determine what rights they would have wanted as to such issue had it arose upon execution of the NCE Agreement.

It is important to realize that there can be other obligations and duties for the NCE and its management, such as the duty of care and/or the duty of loyalty, if formed in other states. For example, in Florida, each manager of a manager-managed limited liability company, and each member of a member-managed limited liability company owes fiduciary duties of care and loyalty to the members. Florida also maintains a conditional duty to disclose in a manager-managed limited liability company whether a member has a right to vote or consent. The specific duties and obligations vary state by state, with differing obligations and levels of protection. Thus, at the initial formation process, NCE management should consult with corporate counsel as to the advantages and disadvantages of forming the NCE in a particular state.

Given the importance of an EB-5 investor’s petition(s) with USCIS, acting in good faith and fair dealing not only relates to complying with terms of the NCE Agreement, compliance with state statutes, providing inspection rights, tax reporting, other reporting obligations and the like, but has a particular emphasis upon and sensitivity to immigration related issues. For example, project updates, updates regarding changes to immigration law, and changes to the regional center should all be communicated to the EB-5 investor on a regular basis. In addition, any other information that could impact an EB-5 investor’s immigration petition or communication with USCIS should be promptly provided.

However, if a project experiences a delay, or an increase in costs, or a change in financing, if the offering memorandum discloses that such delays, cost increases, or changes in financing could occur, and these changes did not jeopardize the immigration status of investors, then this would not be considered a material change in the terms of the offering, and there would be no need to offer a right of rescission to investors. In that case, the NCE manager might send a progress report explaining the change to existing investors, but there would be no need to provide a supplement to the offering memorandum (assuming that the offering had been completed), because the investors would not have a right to make a new investment decision.

Even if a change of circumstances does not rise to the level of a material change requiring the offering of a right to rescission to investors, there could be many other reasons that necessitate a notice to EB-5 investor. The EB-5 investor is different from a typical investor in an alternative vehicle, given the significance of their (and their family’s) immigration petitions. Therefore, its best practices to inform the EB-5 investor of any change that could impact their petitions.

Of particular importance is the sale or refinancing of the project. As a general matter, the EB-5 investor may have a voting right upon such occasion. If so, then the manager or general partner ensure that the proper voting procedures are followed. Upon a sale, refinancing, or redeployment of EB-5 funds, the manager or general partner must first look to the organizational and funding documents to ensure that such sale, refinancing, or redeployment is contemplated and the borrower/developer has complied with representations, covenants, and warranties, and if they have not been complied with, act to preserve its legal rights and remedies.

Concerning redeployment of EB-5 funds into a different project following the sale or refinancing of the project, or upon the maturity of the EB-5 financing, it is possible that the organizational documents are silent as to the issue, or they may reflect that a particular project, purpose, or qualifying investment that is contrary to or dissimilar from the original project, purpose or qualifying expenditure. In such situation, amendments to the documents, and possibly a vote of the EB-5 investors, is necessary to validly authorize the redeployment.

Every EB-5 project is a living, fluid, and ever-changing organism. There are events and contingencies that you cannot control or contemplate. If you ignore these facts, and believe that merely because the offering is complete, then you do so at your own risk and can substantially increase your liability exposure. At the initial drafting stage, building both flexibility and project specificity into each NCE Agreement is key, so that NCE management has the ability and understanding to deal with changing circumstances through the life of the investment and the EB-5 project. As noted above, the EB-5 investors need, at a minimum, to be treated in good faith, and in accordance with the provisions of the documents, as well as complying with any obligations under federal securities laws and state statutes. Someone in your organization must be given authority and responsibility, along with outside counsel, to review, monitor and report to EB-5 investors on a regular basis, to ensure compliance with the governing documents, as well as state law, and potential ongoing securities, immigration, and tax issues.