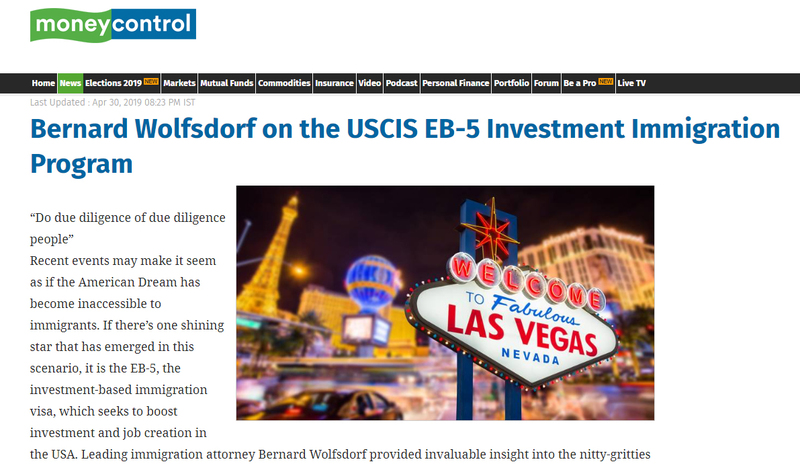 Recent events may make it seem as if the American Dream has become inaccessible to immigrants. If there’s one shining star that has emerged in this scenario, it is the EB-5, the investment-based immigration visa, which seeks to boost investment and job creation in the USA. Leading immigration attorney Bernard Wolfsdorf provided invaluable insight into the nitty-gritties of the process in an engaging chat at the recently concluded Global Investment Immigration Summit.

Picking the right project can determine the fate of an EB-5 holder. What is one key piece of advice you would give hopeful investors in such a scenario?

The project comes down to two points – number one, it must be immigration-compliant, meaning it gets you your green card by creating enough jobs, being structured correctly, put together by professionals, and handled by your immigration lawyer.

Number two, here’s what I say – if I go to the bank tomorrow and ask them to give me a million dollars. They’ll look at me and say “Who are you?”, “Where do you come from?”, “What’s my collateral?” and I’ll say, “Here’s a bag of gold, it’s mine. This is worth 2 million.” Then, they will lend me 1 million. And it is the same with the EB-5. It’s called investing, so you have to invest safely, securely and you should get your money back. But did you hear me promise the money back?

How should the long wait times and exhaustion of leftover visas affect potential investors’ course of action?

At the moment, there are close to 10,000 visas up for grabs each year. If you look at visa issuance over the last few years, China was getting more than its quota – the annual 7.1% of the 9,940, which comes out to 695, plus some trickle-down. So, you’ve got your rice, but then, where’s the meat? Where’s your protein? This programme has basically only been 3 countries (China, Vietnam and now India) who seek it. We do a smattering of Canadians, Germans and others but basically there’s three countries that get it. China moved fast and quick.

I do workshops with most universities. One of my favourites is Stanford University, where I deal with PhDs, and the class is full of Chinese and Indian students. And I say, why is it that the Chinese have got this, and they go for it, and Indians – if you’re at Stanford, you can probably afford it – why don’t you do it? They say, “We worked too hard for our money; we don’t throw it away!”, and I get that. The Indians have worked too hard for their money; the Chinese made easy money through capital appreciation.

The conventional immigration opportunity for Indians, which was a work permit or H1B, is becoming less of an option every day. So, in this case, you get neither the rice nor the meat.

If there’s no meat, you eat rice, and if there’s no rice, you don’t eat. So, at the moment, the good stuff is gone. The leftover has shrunk. People say “It is going to get fixed”. I am hopeful that it will get better. I just haven’t seen that happen.

I do think that most people could stomach a five or six-year wait. If it pops up to seven or eight, I think that becomes unreasonable. I almost want to say, apply when your baby is born, so you can gift them an EB-5 and the American dream!

Wait times like these can seem disheartening to potential investors. Have Indians missed the bus when it comes to the EB-5?

No, not at all. A lot of people have got it. I think Indian nationals work too hard and so, they’re more conservative, and they were looking at other routes. But as those other doors have closed… If you are able to invest $500,000 and you invest it in a good collateralised project, it’s not too hard.
For potential age-out cases, you actually want the petition to take as long as possible because that’s credited to the age-out. If it is a 5-year waiting line and your petition took 3 years, then you get 8 years to your credit, so you can safely apply even for a 16-year-old.Ageing out is the big issue now, so the Indian community needs to know that the programme is open and viable. Do your due diligence, and work with a good network, and at the end of the day, there’s every possibility you’ll get your green card. And if you did your financial diligence, you’ll get your money back, but I always like to say ‘most of your money back’, because it is not a financial investment. Don’t look at the returns, look at getting your basic investment back.