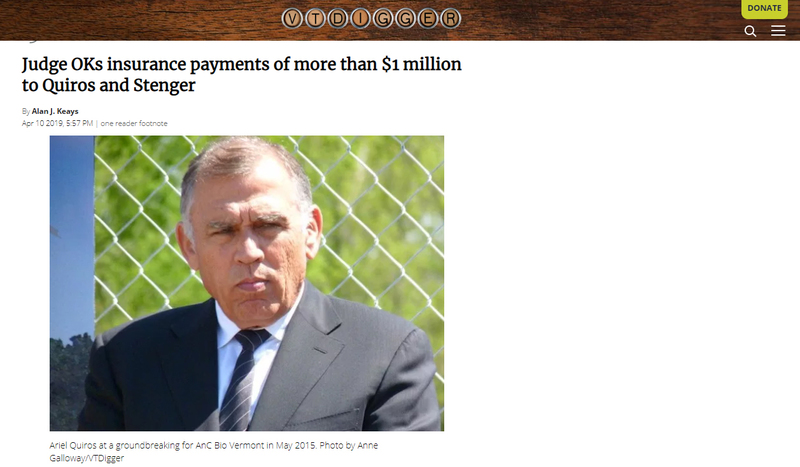 Afederal judge has signed off an a settlement that will provide a $837,500 insurance payout to Ariel Quiros, the former owner of Jay Peak who federal regulators said was the “mastermind” of a “Ponzi-like” scheme to defraud foreign investors.

Quoris’ former business partner, Bill Stenger, who also had coverage through the insurance policy, will also get money through the settlement, receiving $225,000 for his legal bills.

In addition, the court-appointed receivership that represents defrauded Jay Peak investors will receive a separate $837,500 as part of the settlement. Michael Goldberg, who oversees the receivership, helped broker the $1.9 million settlement.

The settlement with Ironshore Indemnity Inc. of Minnesota came despite objections from Quiros’ former legal team, who will receive less than 10 percent of the $3 million they claim they are owed and say the settlement will preclude them from getting paid in full under the policy.

The Miami businessman’s current lawyer isn’t convinced the judge’s recent approval of the settlement will end the case because she believes the previous lawyers will appeal the ruling.

Those former lawyers have 30 days from the date of the judge approving the settlement — April 4.

“So it isn’t quite over yet,” Melissa Visconti, a Florida attorney now representing Quiros, said Wednesday by email.

The settlement money will pay for some of Quiros’ mounting attorney fees with Visconti, she said, as well as other expenses associated with the legal cases. The former lawyers will get $250,000 from Quiros’ share.

Quiros has been mired in court cases since the U.S. Securities and Exchange Commission accused him and his former business partner, Stenger, the president and CEO of Jay Peak, with 52 counts of securities fraud in April 2016. Quiros and Stenger were accused of misusing $200 million in EB-5 investor funds, with Quiros allegedly diverting $50 million for his personal use.

The deal heads off a long-running dispute in which Quiros claimed that the insurer was on the hook under the policy for up to $10 million to cover his legal costs and other expenses in defending himself against investor fraud allegations.

The insurance company had disagreed it was responsible for coverage involving a fraud, but eventually agreed to the proposed settlement.

“The Court finds that Ironshore, the Receiver, Ariel Quiros, and William Stenger have agreed to this Settlement in good faith and that Ironshore is paying a fair share of the potential damages for which it could be liable,” Judge Darrin P. Gayles wrote in the recent order approving the settlement.

Stenger, an officer in the Quiros companies covered by the policy, will receive a $225,000 payout, which Visconti said would cover all of Stenger’s legal bills because he less aggressively fought the charges.

Stenger was ordered to pay $175,000 in state and federal civil penalties in connection with the legal cases.

Former attorneys for Quiros had tried to block the settlement with the insurance company.

They contended that a proposed “bar order,” which prevented further lawsuits against the insurer, would prevent them seeking money under Ironshore’s policy with Quiros to collect on the millions they are owed.

Quiros’ former legal team represented him in depositions with the U.S. Securities and Exchange Commission before the SEC. State regulators also brought separate lawsuits in April 2016. Quiros later fired those attorneys in March 2017.

“The current proposed settlement and request for a bar order provides for a bar against LC and MSK’s case against Ironshore with no consideration whatsoever to be paid to LC and MSK—while further enriching Quiros and Ironshore,” Kahn wrote.