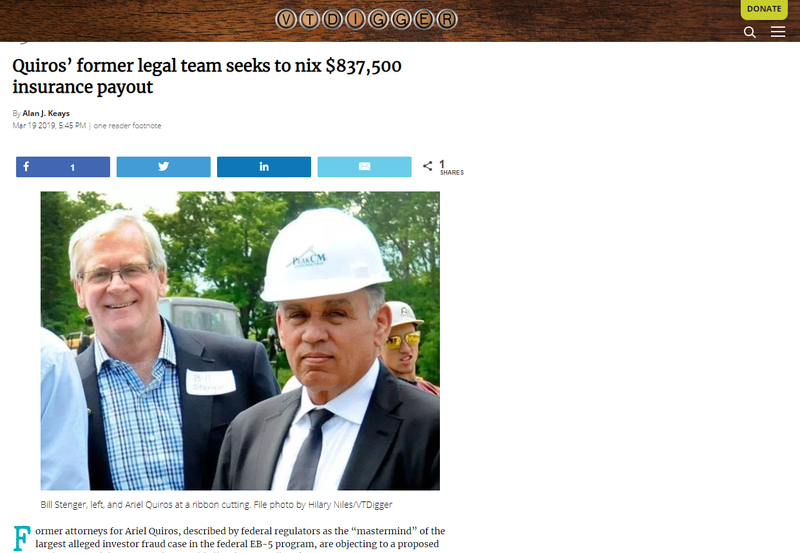 Former attorneys for Ariel Quiros, described by federal regulators as the “mastermind” of the largest alleged investor fraud case in the federal EB-5 program, are objecting to a proposed settlement with his insurer that would allow him to collect $837,500.

That’s because, the legal team says, they won’t be getting any of the settlement even though they racked up $3 million in legal bills defending the Jay Peak developer from fraud allegations before he fired them.

The court filing late last week by Quiros’ former legal team is the latest salvo in a long-running dispute over their unpaid bills since he terminated them two years ago.

Earlier this year, a proposed settlement between Quiros and his insurer, Ironshore Indemnity, was reached, though a federal judge still must sign off on the deal.

Quiros has asserted that under a policy he and his businesses had with the Minnesota-based
insurance company that he was entitled to up to $10 million to defend himself from legal claims.

The insurance company disagreed it was responsible for coverage involving a fraud, but eventually agreed to the proposed settlement.

Now, the Miami businessman’s former attorneys are seeking to block that deal, saying that if it goes through a provision would prevent anyone from suing the insurance company, including the lawyers for their unpaid bills.

Those attorneys had represented Quiros prior to the U.S. Securities and Exchange Commission and state regulators bringing separate lawsuits in April 2016 against him and his former business partner, Bill Stenger, then CEO and president of Jay Peak.

Those lawsuit accused the two ski resort developers of misusing $200 million of the more than $400 million they raised through the federal EB-5 immigrant investor program meant to fund massive upgrades at Jay Peak as well as other projects.

Those attorneys continued to represent Quiros through March 2017 when he fired them. Quiros’ former legal team have been fighting for payment of their unpaid bills ever since.

As part of that fight, Quiros’ former legal team has filed an action in federal court in New York against Ironshore Indemnity seeking funds under his policy to pay at least some of their unpaid legal bills.

“The current proposed settlement and request for a bar order provides for a bar against LC and MSK’s case against Ironshore with no consideration whatsoever to be paid to LC and MSK—while further enriching Quiros and Ironshore,” Kahn wrote.

“If approved,” the attorney later added in the filing, “LC and MSK will have received no compensation whatsoever for their defense of Quiros and for having a contractual claim against Ironshore forever barred.”

The $837,500 that Quiros would receive under the settlement with Ironshore is a small part of the amount he must pay to investors in the EB-5 program who were harmed by the fraud.

Regulators have said Quiros was the “mastermind” of the “Ponzi-like” scheme that played out with immigrant investor funds that had been put into projects by those seeking seeking U.S. residency.

Quiros has previously agreed to a more than $80 million settlement with federal regulators, surrendering several properties he owed to meet that obligation, including Jay Peak and Burke Mountain ski areas in Vermont.

In addition, he agreed to turn over an estimated $2 million in properties to state regulators to resolve civil claims brought by the state of Vermont against him.

The proposed settlement with Ironshore totals about $1.9 million. In addition to the $837,500 set to go to Quiros, another $837,500 will go to the Jay Peak receivership which Goldberg oversees.

Also, Stenger, who as an officer is covered by the policy, would receive a $225,000 payout, with that money to be used to pay for his attorneys’ fees in the cases brought against him.

Judge Darrin P. Gayles, who is presiding in federal court in Miami where the civil fraud case against Quiros brought by the SEC is pending, has not approved the proposed settlement.

That case is pending in a federal court in Florida because that is where Quiros resides and many of his businesses are based.

Neither Kahn nor Goldberg returned messages this week seeking comment.