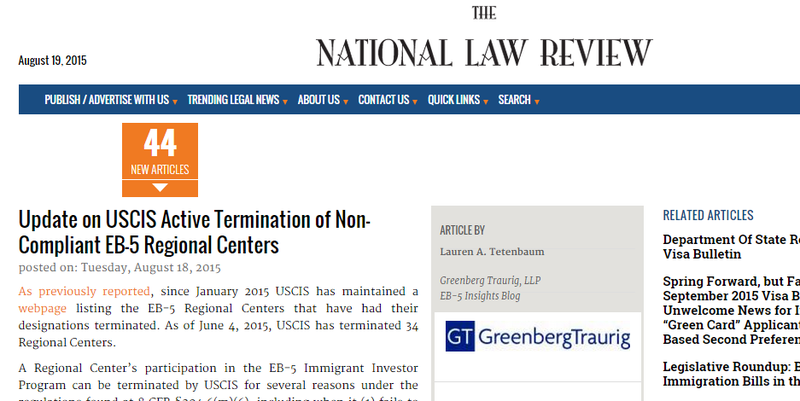 A Regional Center’s participation in the EB-5 Immigrant Investor Program can be terminated by USCIS for several reasons under the regulations found at 8 CFR §204.6(m)(6), including when it (1) fails to submit Form I-924A to demonstrate its eligibility on an annual basis or on a cumulative basis and/or as otherwise requested by USCIS; (2) fails to promote economic growth as required; or (3) engages in fraudulent activities.

Form I-924A filings should include updated information demonstrating that the Regional Center is continuing to promote economic growth, improved regional productivity, job creation, or increased domestic capital investment on an approved geographic area. In September 2014, EB-5 Program Director Nicholas Colucci provided important tips for filing Form I-924A, such as including a statement, if applicable, as to why the Regional Center was inactive in the past year and how it had previously promoted economic growth and development.

In assessing the promotion of economic growth, USCIS may closely examine factors including how active the Regional Center has been (for example, USCIS has taken issue with a Regional Center having recruited only 2 investors over a 26-month period when its original economic report projected sufficient development for 476) and whether the Regional Center is actually creating jobs as per its original designation (for example, USCIS has terminated a Regional Center for engaging merely in job preservation, which is permissible only if demonstrated that the investors will be investing in a troubled business, as per 8 CFR §204.6(j)(4)(ii)). For those centers, that have not had an active market offering in the current fiscal year it is important to show activities involved with either: administration of previously raised funds or the review and diligence of upcoming investment opportunities that will be marketing by the Regional Center in the future.

USCIS may terminate a Regional Center due to fraud when the Regional Center engages in fraudulent securities offerings or investment schemes. Regional Centers’ scam activities such as false promises, misleading marketing materials, and misuse of funds can further lead to emergency enforcement action by the US Securities and Exchange Commission and have civil and criminal justice consequences.

As per the regulations, USCIS will issue a Notice of Intent to Terminate (NOIT) the participation of a Regional Center in the program setting forth its reasons; the Regional Center will have 30 days from receipt of the Notice to offer evidence in opposition, and then may appeal the ultimate decision within 30 days of its service. A Regional Center that has been terminated may no longer participate in the EB-5 program.

The termination of a Regional Center can result in the denial of a pending I-526 petition for a foreign national who has invested through that Regional Center and can terminate an investor’s permanent resident status if he or she has not yet removed the conditional basis of the status. While the USCIS Terminated Regional Center webpage is a valuable reference, USCIS updates the page only periodically and makes no claim that the published list is complete, timely, or accurate.