The EB-5 visa and the American dream 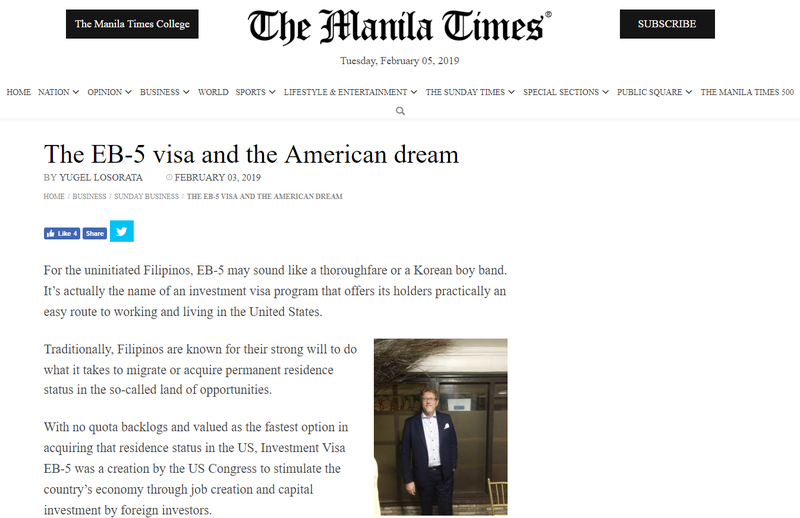 For the uninitiated Filipinos, EB-5 may sound like a thoroughfare or a Korean boy band. It’s actually the name of an investment visa program that offers its holders practically an easy route to working and living in the United States.

Nicolai Hinrichsen, a senior attorney with the Miller Mayer Immigration Law Group, recently met with Filipino reporters to discuss what EB-5 is all about.

Traditionally, Filipinos are known for their strong will to do what it takes to migrate or acquire permanent residence status in the so-called land of opportunities.

With no quota backlogs and valued as the fastest option in acquiring that residence status in the US, Investment Visa EB-5 was a creation by the US Congress to stimulate the country’s economy through job creation and capital investment by foreign investors.

“There are 10 thousand EB-5 visas and no country can take more than 7 percent of those visas. China is the driver for EB-5 program due to its overwhelming success among Chinese investors,” says Nicolai Hinrichsen, senior attorney with the Miller Mayer LLP and managing partner of its Asia EB-5 practice.

By basic arithmetic, one has to invest a minimum of $500,000 to at least qualify for the program which by the current exchange rate should mean around P25 million. EB-5 holders can bring along family members (spouse and unmarried children below 21) to study, work and reside in the US “without additional immigration requirements” that sounds synonymous to being hassle-free.

Hinrichsen recently presented the said US visa program to some members of the Filipino press as he endorsed “an ideal window to acquire the EB-5 visa” through the assistance of New York-based Lightstone Investments, one of the biggest privately held real estate companies in the US with roughly $6 billion in assets.

A quick glance through that window suggests that minimum investment should be coupled “with an eye in opening up job opportunities for those residing in the US.”

It has been proven that more than $1.6 billion has been invested by more or less 18,000 investors in real estate investment funds being managed by Lightstone.

Recognized by EB-5 Investor Magazine as belonging to the top 25 legal professionals in the field, Hinrichsen noted that Lightstone is an expert on empowering the Regional Center Program which he describes as having “entities designated by the US government to operate industries raising money.” He said, “The Regional Center Program allows the pulling of money from multiple investors and deploying of that money into certain projects. Lightstone has projects and functions like a bank.”

Lightstone as a company has holdings in 28 states and owns 15,000 apartments all over the US.

It is said that Hinrichsen, who regularly speaks at EB-5 engagements the world over, also represents regional centers and developers in structuring EB-5 compliant projects.

“Starting in 2008,” Hinrichsen noted, “EB-5 became a powerhouse alternative to bank financing. $27.6 billion has been invested to US economy via EB-5. By rough calculation, about 4 percent of the growth in the private sector can be attributed to EB-5 investments.”

Some pundits may say EB-5 is not for Filipino investors, owing to its relatively high cost to merely qualify for the application. Well, nothing is impossible for people known for laying down all their eggs to reach the land of milk and honey and change for the better the course of their future.