Quiros to receive $800,000 from insurance settlement in Jay Peak case 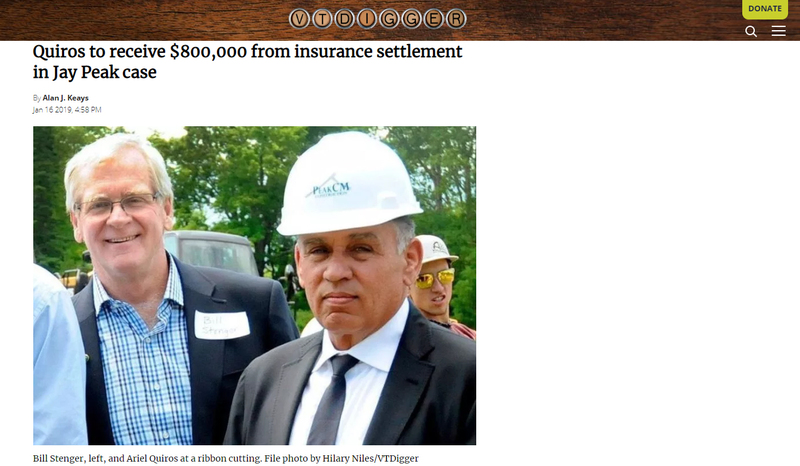 A proposed insurance settlement could result in a $837,500 payout to Ariel Quiros, the former owner of Jay Peak Resort and the so-called “mastermind” of a $200 million Ponzi-like scheme that defrauded 800 foreign investors.

The proposed settlement with Ironshore Indemnity Inc., a Minnesota-based corporation, was filed last week in federal court in Miami, where Quiros resides and many of his businesses are located.

The settlement is a small fraction of the amount the Miami businessman must pay to investors in the EB-5 program who were harmed by the fraud. A federal court in Miami has ruled that he relinquish properties worth $82 million and $2 million in penalties.

The money will pay for some of Quiros’ mounting attorney fees in state and federal lawsuits that have followed since the Securities and Exchange Commission charged the Miami businessman and his partner, Bill Stenger, the president and CEO of Jay Peak, with 52 counts of securities fraud in April 2016.

The two men perpetrated the fraud over an eight-year period through the state-run EB-5 program. Quiros looted $50 million in a “Ponzi-like” scheme to pay his own personal expenses, including the purchase of a New York City luxury condo.

Stenger will receive a $225,000 payout — $50,000 more than the $175,000 in state and federal civil penalties he is required to pay. The insurance money will be used to pay for attorneys’ fees, according to a defense lawyer.

The details of the proposed settlement in the insurance lawsuit are included in a flurry of recent court filings in legal actions related to the Jay Peak scandal, the largest EB-5 fraud case in the history of the federal visa program.

The proposed settlement calls for a total payout by Ironshore of $1.9 million, according to a filing by the receiver’s attorney.

Michael Goldberg, who represents defrauded investors as the court-appointed receiver for Jay Peak, was also involved in negotiating the settlement and will receive $837,500 for the receivership.

The insurance lawsuit began more than two years ago when Quiros sued his insurance company, claiming that the firm should be on the hook to pay his legal fees up to $10 million.

Stenger, reached by phone Tuesday, said he wasn’t aware of the proposed settlement, and referred questions to his attorneys. David Cleary, a Rutland lawyer who has represented Stenger in civil matters, couldn’t be reached for comment.

“There were strengths and weaknesses on both sides,” Visconti said. “It was going to be very expensive for a long time, with both sides saying whoever lost they were were going to appeal.”

The policy, according to Visconti, covered attorney expenses for those insured under the plan, which included the director and officers of Q Resorts, a Quiros holding company that includes Jay Peak. That’s why, the attorney said, Stenger was covered by the policy.

“Stenger did not actually file, was not a party to this lawsuit, but had made it very clear that he was prepared to file a lawsuit, or join a lawsuit in Vermont,” Visconti said. “So for all intents and purposes he was a party to the lawsuit.”

Visconti said the policy only covered “actual” defense costs. Stenger’s fees were covered entirely while Quiros’ legal expenses were much higher because initially he aggressively fought the SEC charges.

Attorneys for Ironshore, in previous court filings, had denied that the company was required to provide coverage under the policy. The company claimed that the lawsuit against the insurer wasn’t filed in a timely manner, and in his application for coverage Quiros did not disclose the alleged action that led to the investor fraud lawsuits against him.

The insurer had also filed a counterclaim against Quiros, asking a judge to award fees toward Ironshore’s defense costs.

A judge still must sign off on the proposed settlement.

Meanwhile, federal Judge Darrin P. Gayles has approved the lifting of an asset freeze that had been in effect against Quiros since April 2016.

The asset freeze was removed because Quiros fulfilled his $81 million settlement when he turned over properties to the federal government, including the Jay Peak and Burke Mountain ski areas.

Meanwhile, according to Visconti, an asset freeze imposed in the case brought by state regulators in Vermont remains in effect. That freeze only applies to a handful of properties that are part of the estimated $2 million proposed settlement Quiros had reached last year with the state of Vermont.

Also, late last week, Gayles approved a settlement in a separate lawsuit brought by the receiver against Quiros. In that settlement, Quiros waived any ownership rights he or family members had to Jay Peak-related assets.

Goldberg has said obtaining that waiver clears the way for the sale of Jay Peak.

In return for Quiros waiving his ownership rights, the receiver agreed to a bar order for Quiros, which would prevent others, excluding government agencies, from pursuing litigation against Quiros related to the EB-5 fraud scandal at Jay Peak.

The bar order does not extend to criminal probes. The U.S. Attorney’s Office has been conducting a criminal investigation of the fraud for more than two years.

Several investors, as well as People’s United Bank, argued against the bar order, contending that it went too far in shielding Quiros.

People’s Bank argued in a filing that it would prevent financial firms as well as others from bringing Quiros into pending litigation as a defendant, including in a case currently pending in federal court in Vermont alleging People’s “aided and abetted” Quiros.

Lawsuits brought by investors have accused People’s of allowing Quiros to use funds to purchase the ski resort that had been held in escrow accounts to fund certain development projects at the resort.

The bar approved by the judge last week provided “carve outs” for those who challenged it, including People’s Bank, according to Visconti. As a result, those entities would not be barred from pursuing claims, she said.