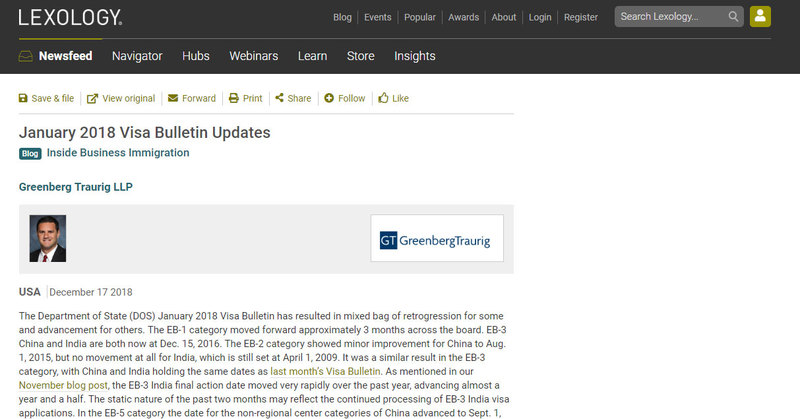 The Department of State (DOS) January 2018 Visa Bulletin has resulted in mixed bag of retrogression for some and advancement for others. The EB-1 category moved forward approximately 3 months across the board. EB-3 China and India are both now at Dec. 15, 2016. The EB-2 category showed minor improvement for China to Aug. 1, 2015, but no movement at all for India, which is still set at April 1, 2009. It was a similar result in the EB-3 category, with China and India holding the same dates as last month’s Visa Bulletin. As mentioned in our November blog post, the EB-3 India final action date moved very rapidly over the past year, advancing almost a year and a half. The static nature of the past two months may reflect the continued processing of EB-3 India visa applications. In the EB-5 category the date for the non-regional center categories of China advanced to Sept. 1, 2014, and Vietnam advanced to June 1, 2016. The date for Vietnam in the EB-5 category has now advanced in this fiscal year from Jan. 1, 2016, in October 2018 to June 1, 2016, in this visa bulletin.

As has happened repeatedly in the recent past, the EB-4 religious workers and regional center EB-5 categories are listed as unavailable because the laws authorizing those categories are due to expire after midnight Dec. 20, 2018, and Dec. 21, 2018, respectively. Accordingly, no EB-4 religious workers visa may be issued, or a final action taken on an adjustment of status application, after midnight Dec. 20, 2018. Further, individuals seeking admission in this category must be admitted into the United States no later than midnight Dec. 20, 2018. If Congress, reauthorizes this category as is expected, the final action date would be current for all countries except El Salvador, Guatemala, and Honduras, which will be set at Feb. 22, 2016, and Mexico, which will be set at April 15, 2017.

Similarly, no EB-5 regional center visas may be issued, or a final action taken on an adjustment of status application, after Dec. 21, 2018. If Congress, reauthorizes this category as is expected, the final action date would be current for all countries except China and Vietnam. The China and Vietnam dates would be set at the same date as the nonregional center category, which is listed above. GT will be closely monitoring these advancements as they unfold.